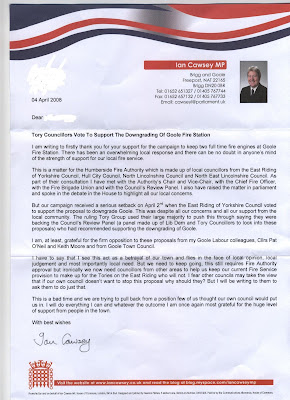 Click on the image to enlarge it
This, ladies and gentlemen was funded by you, the taxpayer. Ian Cawsey MP at least has the grace to acknowledge at the bottom of the letter that it was funded by the Communications Allowance. How any intelligent person could view this unsolicited letter, sent to thousands of his constituencts, as being anything other than politically partisan I fail to understand. A complaint is being made to the House of Commons authorities about this flagrant breach of the rules. They clearly state: "Neither the Communications Allowance nor House stationery, including pre-paid envelopes, can be used for personal benefit or for party political activities or campaigning."

In addition, Ian Cawsey tells a deliberate untruth. Every Tory Councillor from Brigg and Goole voted against the cuts - including those on the East Riding.

Mr Cawsey is clearly a desperate man in a marginal seat. He hasn;t heard the last of this.
Posted by Iain Dale at 12:23 pm

Does this constitute libel of the councillors concerned ?

He should be made to retract, and personally pay for both the original letter and the apology.

He'll need higher standards of integrity outside politics, assuming he can find a job after the next general election.

I just looked him up. Less than a 3.5% swing needed for him to lose his seat. It's almost charming that he thinks he might still cling on, especially when his party is about to double the income tax of many of his constituents to pay for a tax cut for him.

The trouble is, it is a thin line between 'informing the electorate' of important issues, and making it into a party political issue.

The comms allowance gives an in-built advantage to the sitting MP. So, either the rules have to be really prescriptive about what you can and cannot say, or we scrap the whole thing (and save money).

Best way is to use the media and web to get your message across. Most mail like this ends up unread in the bin!

This is the part of politics i hate... can't we just actually allow MPs to govern and stop throwing mud at each other??

What a cretin. How in God's name did he ever think for a second that he'd get away with that?

Is it perhaps the sentence underneath the letter image that says: "Click on the image to enlarge it" that you need to be made bigger ?

If I remember rightly, Iain and some of the contributors on this blog think that nonentities such as this should be paid £80,000+ p.a.

Just the sort of Labour evil-doings that Cawsey's Tory opponent should bring up come the next election. Cawsey has pretty much seen his majority sliced in half at two consecutive elections, so hopefully this one will go blue next time around.

Tories also doing well at a local level there.

Have you noticed the red, white and blue swoosh at the top. This is being used by local Labour candidates. Are they trying to wrap themselves in the flag? It looks very similar to a BNP leaflet.

Anonymous 12:28 - Did you notice the sign just under the photo that says "Click on the image to enlarge it"??

Are you a socialist? I'd hate to think that you are one of our tribe.

Is there not alos a rule about red and green portcullis - for Hoc and HoL??

@ Verity "I'd hate to think that you are one of our tribe."

Anon at 3.12: when I worked in Parliament, MPs could choose between using a red, green or blue portcullis, so probably no rules broken.

man in a shed: I believe I am right in saying that case law allows for political debate to be a little freer and libel is weaker in this area. I may be wrong.

@unsworth "Which 'tribe' is that?"

In Worcester the Labour postal vote letters don't mention the word LABOUR at all! The address is in blue with "local council candidate" at the top. A minute imprint had "Printed by Worcester CLP."

Unsworth - The Right is the tribe I was referring to. The opposing tribe is the Left.

But even if I were referring to the Anglo-Saxons or the Iceni or the Celts or whatever, so what? The toxin of thought fascism seems to have seeped into this thread. Why did you put 'tribe' in quotes? As though it is not a real word.

Zeno - incorrect, old chap. A tribe is a sub-division with homo sapiens.

Anon 2.34pm: Andrew Percy - his Conservative opponent at the next election - will already be making huge political capital out of this.

Yes that appears on all the official Labour communications - well it does on the ones I receive!

I live in this area.

The funny thing I received a newletter from our Tory candidate with him infront of the fire station with David Davis. - Nice work.

The tories lost the local council here due to "dustbin collection".

There is no gurantee we can win this though, the area has ALOT of liberal/tory voters in villages, and there are three labour towns which swing the vote heavily.