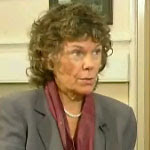 Boris Johnson has just announced on LBC that Kate Hoey would join his administration as a Non Executive Director in charge of promoting competitive sport and monitoring the Olympics.

I imagine this will now result in the Labour whip being withdrawn from her. Could a full defection then follow?

UPDATE: Rather hilariously, LBC didn't seem to recognise that they had a major exclusive and didn't mention it in their 9am news bulletin.
Posted by Iain Dale at 8:50 am

Good, I like Kate Hoey.
Iain, do an piece on the Today interview with David Cameron, because I thought it was a complete disgrace and have complained already to the BBC.

I though David Cameron emerged from it looking like a reasonable man and the Jim or James interchangeable labour spokesman interviewer looked like a arsehole, so I reckon it did not hurt him.

Smart move by Boris and a well deserved kick in the nads for snotty and Nu-Labor. Kate Hoey always speaks with bags of common sense, she'll be missed by her current constituents. Well done Kate 'n' Boris!

I have great respect for Kate Hoey. She is a decent, honest MP who practices what she preaches.

Kate was one of the MPs behind I Want A Referendum's campaign to give us a vote on the EU Treaty.

Politics needs more MPs like Kate Hoey, MPs who stand up for what they believe in, even if it damages their standing in their party.

I hope Boris gives her a role in the London Olympic games. She is very outspoken about corruption in the IOC and could save billions of pounds for Londoners.

Tessa Jowell has to be the last person on Earth who should be put in charge and given free rein of such a massive budget.

Very interesting they said this before the election. Boris must be confident of winning if they feel free to do this. Either that or Kate Hoey has become so hacked off with labour that she now doesn't care what happens to her status as a labour MP.

Good - I live in Vauxhall and am pleased to have an MP who stands up for what she believes in instead of what the party machine tells her to say. I suspect that she won't join the Conservatives though, but perhaps there is room for a grouping of disaffected Labour MPs?

Can this be the Kate Hoey who endlessly flip-flopped over each and every issue when a Minister, including (at first) fox hunting, and who could be relied on to nearly always talk perfectly confused rubbish in every media interview? Lucky Boris!

My guess is that she is going to be deselected at last although it's quite bizarre how long she managed to stay MP for Vauxhall, an area where the local CLP has long been pretty well over on the loony left. This helps to explain her endless shifts in position as she attempted to balance the impossible of her right-wing views and left-wing constituency wallahs.

Puzzled though about her attitude to the Olympics in 2012 and what it says for how Boris will approach them - she was firmly opposed to the bid and campaigned against it for years.

As a member of the Countryside Alliance, I am delighted that our Chairman has given her support to Boris.

Doesnt Boris have to win first?

Excellent news , she is a fine woman...whmne oh when will Mr. Field come and help make a better country

Can this be a late nomination for the top 20 of traitors ? She has made a bit of a journey from the International Mrxist Group to the Labour Party to possibly working for a Tory Mayor......

Why would Kate Hoey and Frank Field join the Conservative Party? I would think UK Independence would be their natural home. I think they both prefer some robust policies rather than the ineffectual hand-wringing and posturing of Dave, especially regarding Europe.

Labour will be hamstrung by what they did with Patrick Mercer. All smart big tent stuff by Boris.

Isn't this on a par with Conservative peer and former MP Lord Coe heading up the organising committee for Livingstone's London Olympics?

She can't defect. Nor can Frank Field. Both their seats are safe Labour seats.

Unless Cameron parachutes them into another constituency at the next GE they would be mad to move.

Besides, they are more valuable behind enemy lines!

I bet she would never join the tories. On the other hand, she has a brain and a backbone so doesn't really belong with nulab.

I think the clue is in the conditional 'would'.

Hoey is very popular personally in Vauxhall. She could easily win if she ran as an independent. Less likely if she ran on a blue ticket.

So, when's Kate crossing the floor?

Gordo the Ineffectual Twat(GIT) will not like this and will rant and rave about disloyalty.

So Kate Hoey was against having the Olympics?

Sensible woman. We need more of her kind.

Media scum said: She has made a bit of a journey from the International Mrxist Group to the Labour Party to possibly working for a Tory Mayor......

Kate Hoey was a Marxist as a student - no revelation there then!

A substantial proportion of students are attracted by Marx/ism for the duration of their studies yet later reject it and move towards the political centre.

Is swapping Quentin Davies for Kate Hoey the best deal since the US bought Alaska for a three marbles and a sugar mouse ?

Shes for hunting so she must be ok.

Kate Hoey will not defect - she is not a Tory, but an extremely principled left leaning libertarian.

I like her a very great deal. As I have said before, I am glad I don't live in Vauxhall, as I would be torn who to vote for.

She will lend gravitas to Boris though!

Bumbling Boris gets it wrong again. Kate Hoey has NOT agreed to be a Non Executive Director in his administration.

From the Telegraph website:
- Mr Johnson had claimed the former minister as the “first member of my administration” - a boast Miss Hoey rejected, saying she had agreed to serve only as a non-partisan advisor.

you Tory half wits are welcome to her

Anon@7.41. Thanks - an you are welcome to the useless Sean Woodward and the bumbling Quentin Davies!

Know who I'd rather have!

I am glad I don't live in Vauxhall, as I would be torn who to vote for.


I do hope you are joking Yalland or you may expect a sharp rap on your door in the wee hours from the doctrinal purity Police.