In Defence of Crispin Blunt

I know I am going to get slagged off for what I am about to write, but here goes, anyway.

Crispin Blunt is right to have rescinded Jack Straw's order banning arts and comedy courses in prisons. I first wrote about this back in 2008...

So Jack Straw has banned prisoners at Whitemoor Prison from learning about how to write a comedy script or do stand up. They were taking part in an eight day course as part of an education programme. What harm can possibly be done by learning about comedy script writing and improvisation? I'd have thought learning how to diffuse potentially harmful situations by the use of humour was a good thing. Instead, Jack Straw has jerked his knee and responded to synthetic tabloid outrage. Not only that he's ordered an inquiry! you couldn't make it up.

Prison is a balance between punishment and rehabilitation. I don't believe in going soft on people in prison - but nor do I believe that activities which make them want to learn and develop should be discouraged.

And then last October I appeared in a cabaret at the Tory conference, the aim of which was to demonstrate how comedy can help in prisoner rehabilitation. I wrote...

Jack Straw cancelled all arts projects in HMP Whitemoor and issued a Prison Service Instruction to all Governors, telling them that, when making decisions about arts interventions, they must ensure projects “meet the public acceptability test” and consider how the activity might “be perceived if open to media scrutiny.”...

Surely if rehabilitation is to mean anything, the arts have a key role to play in helping prisoners discover some self esteem and maybe a talent they never thought they had. Our prison system is set up for punishment, but rehabilitation takes a back seat.

I hope under a Conservative government that will change. Being tough doesn't just mean locking people up and throwing away the key. A tough politician will take tough choices - and that means locking fewer people up and devoting more resources to preparing prisoners for life on the outside. Only in that way will reoffending rates drop. 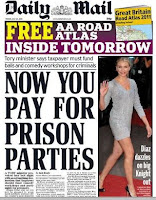 The Daily Mail has predictably gone OTT and Downing Street are distancing themselves from Blunt, briefing that the speech wasn't properly cleared with them.

I wonder how many people who are slagging off Crispin Blunt today have read the actual text of his speech. Do youself a favour and click HERE to do so. The whole speech is a very good statement of aims for the new government with regard to the balance between rehab and punishment. But it is this para which has caused the uproar.

I want to mention one other proposal from Churchill that struck a chord with me. Churchill noted that
‘we have got a class of men in our prisons who need brain food of the most ordinary character.’

‘There have from time to time been occasional lectures given in the prisons, and a few months ago the Somerset Light Infantry, quartered near, had their band in Dartmoor Prison and it played to the convicts. It was an amazing thing the effect which was produced on all these poor people, and their letters for a month after had been eloquent in recognition of the fact.’

I have to say that not all Members of the Commons were quite as enthusiastic about military music with one suggesting that:

‘The music will be an added punishment to some.’

But there is a serious point here. We recognise that arts activities can play a valuable role in helping offenders to address issues such as communication problems and low self-esteem and enabling them to engage in programmes that address their offending behaviour I confess before getting this job I was not aware of Prison Service Instruction number 50 of 2008, though was vaguely conscious of some row in the tabloids about offenders being recorded as enjoying themselves. As a measure it was typical of the last administration’s flakiness under pressure. At the slightest whiff of criticism from the popular press policy tended to get changed and the consequence of an absurd overreaction to offenders being exposed to comedy in prison was this deleterious, damaging and daft instruction. I’m pleased to have marked the actual day of the 100th anniversary of Churchill’s speech on Tuesday by rescinding it.

I'm glad he did that. It was the brave and the right thing to do.

So, go on, call me a woolly liberal, or a LibDem. It'll be water off a duck's back. We need to run our prisons policy very differently. It is not working, and we need to think more about the kind of person we put back into society at the end of their sentences. At the moment the majority can't read or write and they're hooked on drugs. Is it any surprise that they then reoffend? it's all very well saying that we should keep offenders in prison for longer, so they can't offend, but we will be heading for a situation where the prison population heads for 200,000. We simply cannot afford that, even if we thought it was a good idea. And it isn't. The key to lowering reoffending is to improve in-prison rehabilitation. And education via courses like arts and comedy courses is all part of it.

The question is, where does punishment come into it?

Might someone feel they have to break the law in order to get this sort of help? It doesn't really build up the notion of prison as a threat. I wonder if these courses should be offered after prison (or at least towards the end of their sentences) rather than during.

Agreed. Now if they could only do something about prison overcrowding the greatest root cause of prison ineffectiveness...

I wouldn't say it is woolly at all. If this is the worst tabloid outrage we can manage for our prisons - "Prisons are going soft because we are severing links with prisoners' criminal past by giving them new hobbies, interests or career directions." That's fine with me. Lest we forget the snug arrangement prisoners found themselves in under the wishy-washy previous government, where rewards like Sky plus and spa breaks were handed out like a mid-morning TV gameshow. Now I'm not a fan of hunting, but even I wouldn't mind shooting the High Horse the Daily Mail readers are sitting on.

Both Blunt & Clarke are absolutely right and to be applauded in seeking alternative cures for the U.K.'s Brobdingnagian prison population.

As the current system offers inmates nothing but a future of recrimination, and the public nothing more than an assurance of increased taxes, new ideas have to be brought to the table.

That the Conservative Party - normally stereotyped as harbouring draconian measures - are attempting progressive solutions is a sign of how far the Party has advanced.

I do hope then, that Clarke and Blunt are not to be swayed by not only the bigotry and ignorance of the Mail/Sun press, but also the populist-vote obsession that governs Press Officers.

"The key to lowering reoffending is to improve in-prison rehabilitation."

I would say you separate the two establishments. Have a punishment phase then a rehab phase in different buildings, so those rehabilitating do not come in to contact with those just starting their sentences. I would even say have further divisions, so splitting up those just finishing rehab with those just beginning.


You don't try and rinse your clean washing in with the dirty, now do you?

Well done Iain for supporting Blunt. It is a good speech - we have one of the highest re-offending rates in the world. And more prisoners on indeterminate sentances than all of Europe COMIBINED! The ones who should be slated are the likes of the Mail who pick up on one aspect of Blunt's speech and then blow it out of proportion - I assume they are OK with high re-offending?

Completely agree. I used to work for the National Treatment Agency (bit rubbish to tell you the truth) but there was a scheme which helped users in prisons which can only be a good thing. Prison certainly does work for violent offences and stuff but oftentimes the prisoners are really up the creek. Anything, anything that can help, distract them, inspire them etc can only help.

I'm not sure why the imbroglio - can't both things run in tandem? I don't really see any problems except the internal wrangling between Coulson & Clarke. It doesn't need to be like that at all.

mmmmm methinks there are not many here who have actually BEEN to prison! Prison should be a place FOR punishment NOT a place OF punishment - small subtle difference, big implication. Once you bang someone up, you should start work with them to prevent re-offending ASAP. Instead MOST are banged up in a cell (designed for 1 person by the Victorians) with another person for 22 hours a day. Shock horror -they are human too - but treat people lke animals and you get high re-offenidng.Simples, as the meerkat said.

Iain- I think we do need to change our penal system. For what it is worth here are my suggestions.

A two tier prison service one for punishment & the other for rehabilitation.

The first sector Punishment, should be harsh, with basic amenities, completely isolated from Drugs, cigarettes, Mobile signals and religion.

The minimum time served in one of these prisons would be two -years, prisoners have to show remorse, good behaviour before they can be transferred to the Rehabilitation prisons system.

Categories of punishment prisoners should be Murderers, terrorists, Paedophiles. They should never leave punishment sector prisons. You cannot rehabilitate a paedo sex offender, a murderer or terrorist.

In the rehabilitation prisons the prisoners can be readied for release, these should have hostels in the grounds where they can live and work after release.

All prisoners in both systems should be forced to work for their keep and provide value to society they owe.

Also families should pay towards the cost of their convicted family members, if they want more than the basic food.

Hear bloody hear Iain; I for one am glad that the coalition government is risking populist outrage from places like the daily fail in order to implement more effective policies.

The last government bent themselves to every populist whim in order to win points with the tabloid press - look where it got us; highest incarceration and re-offending rate in Europe. Let's do what works, not what's popular.

We have to prevent criminals running their empires from prison and generally punish all offenders as well as rehabilitate them.
Very difficult and I do not pretend to have answers as to the how.
At least the Coalition is prepared to try unlike Labour who basically gave up. So lets wait and see what happens even if it tkaes years, as it will.