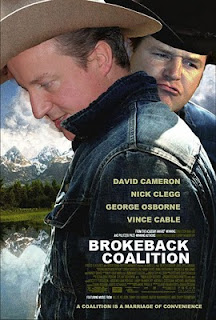 Clearly the silly season is upon us. When a jokey reference by David Davis to a group of former Tate & Lyle colleagues at the Boot & Flogger pub [you really couldn't make it up] to Clegg & Cameron as something akin to the two leading characters in Brokeback Mountain makes the front page of the FT, you know it's a light news day. It's hardly original, either. Several days ago I saw a TV montage showing Clegg and Cameron in a 'love story' type setting. My only comment would be that it is quite refreshing to have people making comments about the two people at the top of government getting on, rather than ranting at each other all the time, which is what Blair and Brown did. I can't imagine Cameron or Clegg taking umbrage at being likened to two handsome actors in one of the most successful films of all time. I'm surprised no one has photoshopped the movie poster yet... [Update: Pic courtesy of Lakelander]

David Davis also raised the possibility of a coupon election. Again, not news. This has been the subject of much discussion in Westminster for several weeks, as most of the journalists who leapt on these remarks today will know. The very fact that it is being discussed illustrates how happy many Conservatives are with the progress of the coalition. If they weren't there would be uproar at the mere suggestion.

Of course, David Davis has made clear his unhappiness with various coalition policies before - 55%, AV, Afghanistan, CGT etc. But those misgivings were all about policy rather than personality or process. It is quite revealing that the personality/process aspect of this gets higher billing that than his views on policy.

This is a Westminster Bubble story although I quite understand why it has hit the headlines. If I was the FT journalist, of course I'd have written it too. When a former political adversary makes any apparently negative comments about their former sparring partner, the reporting will be exaggerated beyond all reason in a bid to whip up a political storm. If David Davis didn't understand that before, he certainly will this morning!

Lesson from this story for budding politicians? Don't hold court in front of friends in a pub near a newspaper's head office. Book a private room!

UPDATE: Sunder Katwala writes a very interesting piece on this story HERE. His best line is this...

A Boot and Flogger Parliamentary Club would be an ideal name for a guerrilla "Real/Continuity 1922" backbench force.

UPDATE: A reader emails to remind me that it was Richard Littlejohn who first coined the Brokeback analogy back in May.
Posted by Iain Dale at 1:25 pm

I think you'll find that someone HAS already done it.

I agree it's not news. The FT continue with their pro-Europe, pro-Labour agenda. Shame that its market coverage is so good.

But then, it's also not news that after his David Icke moment, DD has descended into the sterotypical grumbling right winger, happier in opposition than power.

Does anyone (other than him, and possibly some loyalists like yourself) really think Labour wouldn't still be in power if he had won the Tory leadership. I certainly wouldn't have voted for & donated to the party.

In comments that reflect Labour attacks on the government, Mr Davis said the “Big Society”, was just “a Blairite dressing” for the coalition’s small government agenda.

D.D has nothing to lose has he? Only saying what the Right Wing of the Party are thinking. Seems obvious that D.C has no plans to include him in the Cabinet on account of earlier dissent. Pity - h e would have been a brilliant Home Sec. Cameron's loss.

But thats the problem for both DD and some Liberals they get on better than they should.

Both will feel the other is giving away too much. This has long been felt by both sides.

Davies tirade has just confirmed this to everyone the Tories or even yourself can't now deny that there are splits in this Condem government. You and your friends call it a silly news story many believe its something far more.

2 years is looking a decent bet for the next election.

Sky News BREAKING NEWS - somebody overheard in a bar saying something they shouldn't.

Off-topic, I just read your tweet:
"Just to save time, message to TV & Radio: No, I don't want to come on your programme to talk about you know who saying u know what. Capice?"

You have come back all guns firing, but are you sure you want to burn your boats like that?

Goldenballs, if there were no "splits" in the coalition government then it wouldn't be a COALITION government now, would it? As for your prediction, I'll think back to your pre-election "analyses" and file it appropriately under "Garbage".

I'm just surprised that no poofs have been on here complaining of being "offended" by the use of the Brokeback Mountain poster.

Iain, I think your comments are well-taken.

Otherwise, I am surprised by how much the press is trying to whip up a story. Seems to me, the Coalition is as strong as ever. Neither party has any real reason or incentive bring the government down. The Coalition's health, I think, is Mr. Davis' real source of frustration.

Of course its the "Brokeback" coalition. Labour made us broke, but now were coming back!

Really must be a slow news day as Sky are giving this "story" top billing. Same as with the murderer Moat story.

if there were no "splits" in the coalition government then it wouldn't be a COALITION government now, would it?

is that the best you could come up with. so if its a coalition government splits are allowed and shouldn't be seen as splits ?
Clegg can answer in a personal capacity at PMQS and DD can call DC big idea as little more than Blair dressing on big cuts in public spending!

Good luck with that view though i'm sure the condem lovers will take it to heartand and repeat it daily as there mantra but most other people will realise its just hogwash.

David Cameron: This is a one-shot thing we got goin' on here.

Nick Clegg: It's nobody's business but ours.

Nick Clegg: Me neither

Paddy, I just read that out to DD who almost wet himself laughing.

Goldenballs: "Is that the best you can come up with?"

Not at all. But as I'm dealing with a New Labour lickspittle who has spent the last thirteen years as either a fool or a knave, it's pretty much all I need.

Straight from the film script - only the names were changed !

"A reader emails to remind me that it was Richard Littlejohn who first coined the Brokeback analogy back in May."

I used the analogy at least two days before then on my job, although I'm not claiming to be the originator.

Big Society as a cover for a small-state agenda sounds like a pretty fine idea to me. While everybody is cracking the obligatory jokes about "voluntary heart surgeons" the government is getting on and stripping back 13 years of horrific public sector and government growth. Win-win, I think the term is.

"I can't imagine Cameron or Clegg taking umbrage at being likened to two handsome actors in one of the most successful films of all time."

I think it's a riot!

Seriously though, the coalition would be something of a joke if it wasn't so dangerously pursuing the last admin's platform.

There are more than a few Tory pundits, this Sunday, saying that Cameron is presiding over the demise of the Tory Party.

Such a pity because where will conservatives now go?

Goldenballs --- are you saying there were not splits in the labour govt - or in the conservative govt of thatcher (never mind major) ??

This govt is proceeding on the basis of what it has agreed and is ignoring where it does not agree.
It has just won a vote on schools by 90 !!

All these stories remind me of is how gorgeous their wives are and how many children they have.

Davis of course does his reputation no good - it just makes a load of dorks out of the Tory right wing, and since I am basically a right wing tory I find this sad.

wimbledon was dull this year. too many aces and easy victories by the top players. so was the golf open less than a contest. now the politics is going yawnsville too, with this brokeback non-event, and various Milibands boring away.

movies like twilight leave you wondering what they're all about, and emotionally unbothered. the whole world has gone lethargic. there's no edge to anything.

Tapestry: in your own words:

"movies like Twilight leave you wondering what they're all about, and emotionally unbothered. The whole world has gone lethargic. There's no edge to anything."

Try being a Photoshop satirist in the era of the Con/Deb Coalition.

Bon mots like "Brokeback Coalition" from David Davis are a welcome edge in these dull days.

talindI should be grateful Brown has gone and leave it at that. Photoshoppers should make one of Cameron and Clegg sitting on a crushed Blair and Brown, or something with some bite in it. They've done the Cameron/Clegg love-in for weeks and, as an angle, it's already tired. Your skill is clearly needing an outlet. Give us some retro Nulab-anger, something for the band of brothers to chew on.

Not a patch on the orginal political movie poster. The take on "Gone With the Wind" with Ronald Reagen carrying Margaret thatcher in his arms.
The caption was something like:-
"She said she would follow him to the end of the World. He said that he would arrange it"
Maybe not such fun for conservatives, but brilliantly done 20 years before Photoshop.