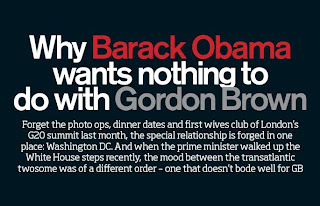 The June issue of GQ Magazine (on sale from next Thursday) contains an article by leading American media commentator Michael Wolff about the 'special' relationship between Britain and America, and the rapport - or lack thereof - between Barack Obama and Gordon Brown. According to Wolff, most people in America continue to regard Blair as the British prime minister and don't know who Brown is.

Of all the recent pairings of British prime ministers and American presidents, none is as strained as Gordon Brown and Barack Obama... His recent visit was an excruciating affair... Well, it may not have been the least successful visit ever to Washington by a foreign head of state, but it could be among the most ignominious... From a namerecognition point of view, he’s a nothing... Part of the problem is that at the Obama White House they're pretty sure that Brown is not a keeper. The new president is not going to lavish affection and attention on someone he doesn't know, or care about, or expect to be in office very long.

Although it doesn't say much about the "special relationship" does it? They can't even be bothered to treat him with the respect that his office (if not the man) deserve.

Not going to lavish affection on him? Did nobody see the news around the G20?

It seems that there is only 1 person who hasn't realised that the game is up - a Mr G. Brown of 10 Downing Street in London.

Just shows how much more adept Obama is than Brown at the politics game. Then again is Brown adept at anything apart from losing his temper and his marbles, and picking his nose?

There goes another laser printer!

The 'special relationship' is a sham. It only works as long as it is in the USA's interest.

They could not care less about us!

The Americans are friendly -up to a point- BUT, as in business, they will drop you like a hot potato and ignore you forever, when they decide you have served their purpose.

They pushed us into joining the EU and are pushing us towards the EUSSR! (although in time that will work against them!)

They are NOT friends of this country, WAKE UP.

Neither is the EU. I was o impressed by Mr Hannans speech to the Conservative Spring Conference. Absolutely spot on.

It's a pity the PLP don't adopt the same view and then act upon it...

Let us hope that the realisation that Brown is not a "keeper" started in America.

I'm not sure how much credit to give a publication which appears to think the Prime Minister is Head of State.

No. Did I miss anything important?

If it's in GQ - it must be true!
Obama clearly wastes so little time on Brown you wonder why he asked specifically at the G20 dinner if he could stand up and make a speech where he praised Brown's G20 handling and led a round of applause for him.

Maybe that Obama guy is smarter than I thought....

Who, in their right mind, would want to be a friend of either of these dreadful people anyway? Nope, can't think of anyone.......JD.

At formal meetings it is normal to pass a vote of thanks to the chair. It doesn't mean you like him.

It is also normal to thank and praise one's host. It doesn't mean you enjoyed it.

Don't expect any manners from Chicago Democrats and their "community organiser" leader - used to call them "agitators", didn't we?

Actually Brown and Obama share one trait at least, they are both very thin skinned and do not respond well to criticism.

This is fairly obvious when you think about it. Just look at the footage from the G20 summit - you could clearly tell there were moments when Brown was making Obama feel distinctly uncomfortable.

Perhaps Obama's advisers had been reading the Guido Fawkes blog and had told him about Jonah's curse?

Of course it's normal to thank your host - I don't think you need to request making a special speech just to do it before leading a standing ovation.

I'm not saying Obama loves the guy but get some perspective - he still needs to work with him for the next 12 months and there isn't another politician in the world whose views so closely mirror Obama's.

Who did he call "lightweight" again?