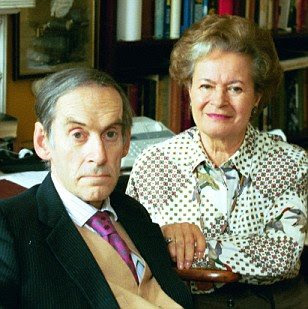 Last night, John and I attended an 80th birthday celebration for former Liberal leader Jeremy Thorpe at the National Liberal Club. It was quite a touching event, with speeches from Nick Clegg, Alan Beith and Nick Harvey among others. Why was I there? I got to know Jeremy and his wife Marion quite well about ten years ago when I published a book of his memories called IN MY OWN TIME. It was the first time he had gone into print since the events which led to his political downfall in 1979. Spending six months with him putting the book together was a fascinating experience as he was he key figure in my early political memories in the mid 1970s. Despite the debilitating effects of Parkinson's Disease, his mind has remained razor sharp and we had some fascinating political discussions. I hadn't seen him for a few years and had feared that his health would have deteriorated, but he was as sparky as ever, despite a very weak voice. Following the speeches last night Jeremy also made a short speech. It must have taken a tremendous effort on his part, but he was determined to get through, and he did. 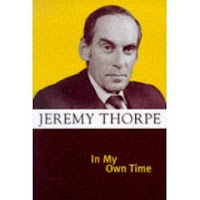 For anyone much younger than me Jeremy Thorpe is a name which is only associated with one thing - the trial. But we should remember that for a decade he was considered to be Britain's most charismatic politician in an age of technocrats. He brought a campaigning verve to politics which few had bettered since.

Yes, in many ways he was a flawed politician, but in many ways he kept the Liberal flag flying against all the odds. His political career ended in the worst possible circumstances, yet he never embraced the bitterness which could so easily have dominated his long years of political exile. The Liberal Party itself was not kind to him. It's easy to understand why, but on a human level it was deeply unforgivable. Jeremy always felt his party would come calling for him once again, if only for wise advice. But those calls never came. The peerage he so desperately wanted eluded him.

Jeremy's life has been full of success and triumph, but it has also been filled with tragedy, self inflicted trauma and a desperate illness. It's been a pleasure to know him and Marion and share in some of their memories, even the more painful ones.
Posted by Iain Dale at 8:30 am

Ian, I think it now behoves you to give us your list of politicians who are without flaw.

Mine is as follows:-

Oh Iain, if only there were more people like you in the world, better able to take a circumspect view of life and see beyond the superficial character assessments which cloud our politics now.

Why are you in the Tory party ? Maybe it is because Labour are the new 'nasty party' ? Who knows.

And why are you hiding your light under a bushel when it comes to your past as a publisher ? What about doing a feature about this.

Or even be interviewed in a rather 'masturbatory' way for Total Politics - what is the point of having your own magazine if you don't give us a bit of an insight into the 'real Iain Dale'. Or is it that you don't think we are ready for that.

As a separate post from my last one, so you can mod it out if needs be, let us not forget that if Mr Dale was the same age as Mr Thorpe, then his current 'partnership arrangement' would not have been possible, and that if Iain's neighbours had 'grassed him' up for his living arrangements, he might have ended up in prison.

Let us realise just how far we have come that no longer can someone be blackmailed for following their heart's desire, and 'rejoice at that news, just rejoice'...

By the way, what about some more features about the 'great and the good' you have made friends with on life's highway, it would be very interesting.

Nice tribute. I am just old enough to remembr Jeremy Thorpe before his downfall and i recall him being terrific - streets ahead of Wilson or Heath in terms of intellect and popular appeal, And right on most of the key issues of his day - europe, devolution, gender equality, gay rights, drugs, imigration, freedom of information, Vietnam ,Palestine,,,,

Glad he had a food night - he's earned it

Anonymous at 9.21, I think most people on this blog think they know rather too much about me anyway!

Good for you, Ian. He was the best public speaker I ever heard. I met him once when we both spoke at the Oxford Union in the mid 70s; nice guy and great intellect.

I am old enough to remember the Jeremy Thorpe affair unraveling on a daily basis. This wasn't just a quiet (married) homo having a rent boy and a brandy at the end of the day in order to relax - but a nasty and quite farcical attempt at hiring a hit man to do in a former lover.

I don't condemn the man for what he did. He was a product of very privileged times, when deference was paid to our leaders and our betters - most people could simply not believe a man of his stature was capable of feasting with panthers. The establishment was still capable of protecting its own and there remain questions over string-pulling attempts. The fact that he even thought a peerage might be in the pipeline, or that the Liberal party would consult him ever again about anything, demonstrates his tenuous grasp on morality.

The anonymous idiot who wrote

"Let us realise just how far we have come that no longer can someone be blackmailed for following their heart's desire, and 'rejoice at that news, just rejoice'..."

is either unaware of, or has forgotten that Thorpe's heart's desire was to have someone "dealt with", because he was an inconvenient blemish on his political career.

Let's not get into gay martyrdom again, shall we? Not on this occasion.

Interesting post. 60+ as I am, I remembered very little about Jeremy Thorpe beyond that his first wife died in a car accident and I never much liked his politics, which isn't to say I think politicians who don't reflect my own views can't be honourable.

But good heavens! Apparently I have forgotten all manner of scandal - murder charges, gay allegations. Seems I just remember a good man whose politics I happened not to agree with and whose first wife died in tragic circumstances.

Maybe I thought the other stuff to be nonsense and consigned it to the wheelie bin in my memory. Currently reading up on it would appear to confirm it was the right place for it. Pity it didn't go to landfill and instead gets recycled.

I heard Jeremy Thorpe speak during the 1974 election at a public meeting in Cheshire - yes they still had public meetings in those days.

It was before I'd become interested in doing research into speech-making, but I do remember it as a brilliant speech that actually inspired me to vote Liberal for the first time in my life.

In retrospect, it would be fascinating to hear it again to have a look at what rhetorical techniques he was using - but it wasn't, alas, televised or recorded.

Thorpe was a complete pillock who got what he deserved, complete political disgrace and confinement to obscurity.

I'm afraid that I have to agree with Wrinkled Weasel.Although he was properly acquitted of the charges against him,the evidence revealed at the trial was far more than enough to require his permanent retirement from public life.

The late Auberon Waugh wrote a brilliant book about the case-"The Last Word" if a younger generation wonder what it was all about.

Jeremy Thorp in his political Life lived upto the name of his party! Liberal was his ideology and Liberal seemed to be from what I have seen the parties platform.

Not like the chimera that is the Liberal Democrats or more apt name i call them the little Hitler party - The ILLIberal Democrats!

In happy days as a Parliamentary researcher in the 80s and 90s, the old hands that shared the House with him said he was a brilliant mimic. Foot said that if he closed his eyes, he could make himself believe he was listening to his father. Apparently held people rapt in whichever bar he frequented - think it may have been the smoking room.

Like Profumo, he did the honourable thing after trying everything else. His retreat from public life and decorous silence redeems his previous behaviour in many ways.

Would that chavvy wide-boys such as Archer, Aitken and the like learn from Thorpe's decent disengagement from public view. People just don't behave properly any more.

I met Thorpe when he came to address our School Union at my ghastly boarding school in his constituency in north Devon in about 1971. A brilliant speaker and utterly charming. As previous posts have said, one of the old school who did the decent thing after the Norman Scott business. Compare with any number of other today's 'politicians'. Blair and WMD anyone?

Do I remember something about a couple of Great Danes being shot?

I was growing up in North Devon when Thorpe was the local MP.

First class intellect! I don't think so. A 3rd from Oxford, always ready with the glib, populist phrase. Patronised the locals.

Iain, you are easily impressed... and easily fooled.

Didn't Auberon Waugh run against him as 'the dog lovers party' in 1979? Hilarious.

Thorpe was a dreadful man and shot a dog IIRC

However, he will be forever remembered for one of the very few political quotations of the last fifty years deserving a place in the ODQ.
Of Macmillan's night of the long knives he said, "Greater self love hath no man than this, that he lay down his friends for his life."