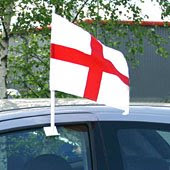 I was supposed to be on a Routemaster bus with Boris this morning, flying the flag of St George across London. Instead, work has intervened. Boris has written about St George's Day on the Blue Blog.
Posted by Iain Dale at 8:46 am

My young daughter is terribly excited, because she's making a St George's flag at school today. This is a London school of mixed ethnicity, religions and cultures. And they are all making St George's flags and understanding what it means.

Just thought I'd get that in before we get the usual rot.

@Rich Johnston - What it means is that your daughter lives in the only home nation with no Parliament which is run by foreigners and which elected another government at the general election which would not have sold her into debt slavery for the rest of her life.

PS Watch closely if any of the 'efficiency savings' are made in budgets to devolved administrations in accordance with Barnett. Or is it just the English who must pay for Scottish Socialism?

I'm sure Gordon won't be celebrating this.

Any hope for the country was snuffed out yesterday. I've been immersed in these bad a at the bank for years now amd I hoped there was something I had missed, but there wasn't. Labour have a scorched earth policy of letting debt increase. Jack straw looks like he's got the caretaker job. O hope he gets to stand against harrier so she understands how despised her brand of feminism is.

Off to buy a at George cufflinks

Happy St George's day to all you sassenachs!

Quite so Mr Dale - same goes. Dashed nice weather we're having at this time of year - sunflowers poking thru, corriander too - however I may have to apologise when my privet hedge takes over the world (by next week unless I pull my bloody finger out!)

Lest we forget: "It has become apparent that many people of subnormal intelligence have become licensed to drive a car. To ensure that other motorists can identify potentially dangerous drivers, it has become compulsory that everyone who falls into this bracket should carry a warning to other road users, so that they may keep out of their way. This warning shall consist of a flag with a red cross on a white background and must be displayed on the car - or, more likely, the van - at all times. For drivers of exceptionally low ability, extra flags are required"

Rich Johnson - what it means? What exactly does it mean? The answer - nothing at all.

'Nationalism is an infantile disease. It is the measles of mankind.
Albert Einstein'

So say all of us.

All you lot need now is your own parliament and the rest of us in the British Isles and elsewhere in Europe can get on with our lives.

Um.. precisely who was St George?

How many people know, I wonder? Anyone know?

And a happy St George's Day to you too, Iain.

Unless people want to do this instinctively it's so false.

It smacks of a Gordon Brown Spontaneous Celebration, or All Creatures To Make Merry On Pain Of [our electoral] Death.

Happy St George's Day Iain and to all the English...

Which reminds me... must pop over to Alistair Campbell's place to wish the same to him. He was born in England and has lived in England all his life but strangely thinks himself Scottish...

Happy St. George's day Iain (and a long and miserable life to Andrew for that gratuitous insult - I will remember it next time I see a Saltire).

As an Ulsterman I must say it is about time you Limeys ignored the red devils and empire haters within your country and started celebrating your rich culture and history.You could start by celebrating giving us the greatest language in history (and Man City!!!)

I find it funny that Boris wraps himself up in the routemaster. He obviously never had to commute on the noisy, shaky, cold, smelly routemasters I had to. It is the only "policy" of his anyone knows about.
But nice to see the Tories on here embracing foreignors for once. St George, the patron saint who never knew England....

I have a Cross of St George flag flying today too.

St Edmund was the patron saint before George was adopted. His is a similat flag. Edmund is my preference as he was English rather than 'Turkish'.

Good to see the patron saint of Palestine being honoured.

St. George is, along with St. Nicholas, without any question among the
most popular of all saints in history. The odd thing is that nothing
whatsoever can be established about him as a historical figure. Indeed
the among earliest references to this cult in the West involve papal
condemnations of the myths surrounding him.

So how can George be included in a list of "queer" saints. For two
reasons - iconographic and textual.

No one reading early texts about George can fail to be impressed by
the explicit homoeroticism in them. George at one stage is about to
marry, but is prevented by Christ. As the text said "[George] did not
know that Christ was keeping him as a pure virginal bridegroom for
himself". (Budge, 282) Later on after mind-boggling escapades [George
is killed and resurrected a number or times in his myths], Christ
welcomes George into Heaven with bridal imagery: - "And the Lord said
to the blessed George, Hail, My George! Hail beloved of myself and of
My Angels…I swear by My right hand, Oh my beloved one that I will
establish a covenant with thee that when thou shalt bow thyself upon
thy spiritual face in heaven and shall come with all they congregation
to worship the holy Trinity, all the saints know thee by reason of the
honour which I will show thee, O My beloved… " (Budge 320-21).

In these texts, here from Coptic versions, George is presented as the
bridegroom of Christ. Bridal imagery is quite common in discourse
about Christ, but usually male saints are made into "brides of Christ"
[see Carolyn Walker Bynum's work on this], but with George a same sex
marital imagery is used.

George is among the most common subjects of religious art. His
iconographic type is fixed - he is a young beardless warrior. It is
worth noting that some commentators have seen appeal of this figure as
androgynous. Here are the comments of Christopher Walter, a recent
commentator on the cult of George:-

'There can be not doubt that [George] had an exceptional affective
appeal, difficult perhaps for us to grasp, since the Byzantines have
not bequeathed us many empirical descriptions of their feelings. Some
reconstruction can be tentatively undertaken….Thomas Matthews has
studied the affective attitude of the Byzantines towards their icons
and the saints represented on the icons. `One was supposed to fall in
love with these saints.' Or elsewhere: 'The involvement of the
Orthodox beholder with his painted images was complete…The believer
entered a world of images in a war the modern view of paintings cannot
accomplish". However, empathy as a characteristic of human psychology,
must keep pace with development and changes in artistic media. It may
not be amiss therefore to quote James Baldwin's description of a
budding actor in a film. It seems to me to give some insight into the
way that a Byzantine saw an icon of St. George:`…The face of a man, of
a tormented man. Yet, in precisely the way that great music depends,
ultimately, on a great silence, this masculinity was defined and made
powerful by something which was not masculine. It was not feminine
either and something….resisted the word androgynous. It was a quality
to which numbers of persons would respond without knowing what it was
that they were responding. There was a great force in face and a great
gentleness…It was a face which suggested, resonantly in the depths the
truth about our natures'" (Walter, 320)

In addition to all the above, George is patron saint of scouting,
chosen as such by Baden Powell. There is a webpage for George, Patron
of Scouts!

Bynum, Caroline Walker, Jesus as Mother: Studies in the Spirituality
of the High Middle Ages, (Berkeley: 1982)

Paul Halsall - you're telling me Christ was a homosexual?

"[George] did not
know that Christ was keeping him as a pure virginal bridegroom for
himself".Not only was the Lord a homosexual but that he prevented a marriage so he could have the bridegroom himself?

Crikey, the things one reads online!

Salmondnet: "and a long and miserable life to Andrew for that gratuitous insult - I will remember it next time I see a Saltire"Stop being such a knob jockey and get yourself a sense of humour! That piece of wit did the rounds of the whole of England during the last world cup, and very funny it was too - nothing to do with anti-Englishness or anything like that.

Meanwhile, we have the likes of Ignoramus in a Shed spouting anti-Scots bile such as "run by foreigners", "elected another government", "sold... into debt slavery for the rest of her life" etc. etc. conveniently ignoring the truth that we have a Labour government, an abysmal Labour government, because Labour has a large majority of MPs elected in England, with a Labour leadership elected mostly by those English Labour MPs - in other words, England will get rid of this awful government when England stops voting Labour.

P.S. Before someone pipes up with "whiney, whiney, whine, Howard got 60,000 votes more in England than Blair, whiney, whiney, whine", remember that we don't have proportional representation (be careful what you wish for!) and that 60,000 votes in the context of a general election is neither here nor there anyway - Labour won in England, and won big, under the rules - rules that suited us well in the past when the boot was on the other foot - so stop blaming the Scots for the result of how England voted!

Interesting view of democracy, when a 60,000 majority doesn't count. No mandate for the Welsh assembly then.

The difference between us being that your churlish response to my humourous comment on Iain's photo was the response of a knob jockey, whereas your use of the term hoon appears to be simply because you are unable to advance any more cogent response to the clear fact that England has a Labour government because of how England voted, and not because of Scotland or the Scots, which of course rather confirms my initial assessment of you.

I ought to learn to desist from engaging in battles of wit with someone as lightly armed as yourself - all it does is waste my time and wind you up.