Thank You for the Movie 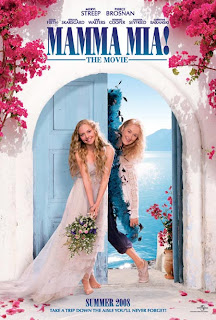 Yesterday was my partner's birthday, so as a special treat (!), we went to see Mamma Mia (the movie) at the Leicester Square Odeon with a couple of friends. To be honest, having enjoyed the stage version so much, I wasn't expecting much, but I was so wrong. I won't bore you with all the details, but I'd rate this very highly in my list of best movies. It was even camper than the theatre version, and that's saying something. Meryl Streep was tremendous and really belted it out. Pierce Brosnan was, shall we say, a little more disappointing in his vocal abilities, as was Colin Firth. They murdered OUR LAST SUMMER and SOS. It somehow didn't matter though. Highlights were Streep's rendition of SLIPPING THROUGH MY FINGERS and DANCING QUEEN, which is on the Youtube clip below. See if you can spot a little cameo appearance by Benny Andersson in the middle. It got a cheer in the cinema.

This is the only film I have been to where the entire audience sat riveted to their seats right until the very end of the credits. Just as well, there was a further cameo from Bjorn Ulvaeus.

The only downside to the evening was when we came out of the cinema and three of us were ranting about what a brilliant movie it has been. I turned to the fourth member of our little group, who was a bit quieter, and suddenly realised why. When Abba broke up in 1982 he hadn't even been born... I suddenly felt my age!

Iain , as I understand it should anyone have been tempted to your room ,whilst at East Anglia , you would have made them drink tea whilst listening to Sparks Abba and Mrs. Thatchers collcted speeches

So long as your happy

I find myself wondering if they are showing the same version of this film in London. Yes it was a delight, but largely due to the strength of the songs. They went for big name stars, but none of them could really sing.

They never fail. Abba. The songs go on forever.

My son,Young Svelte Weasel, is more into bands that stand behind computers and jig about to "techno" beats, went to a festival in Belgium at the weekend. Birdynamnam, Zu vs Dälek, Compuphonic and DJ Urine were the order of the day. And yet, a surprise late Wednesday addition to the programme was....BJORN AGAIN!

"They were great dad", he enthused. "I was at the front, really getting into the music and the girls in the band were winking at me".

Iain, your youtube video is no longer available. Sounds like a fun film though, I was a bit dubious about the whole concept as I had enjoyed Muriel's Wedding so much and thought it might be a bit of a let down.

Six months ago, this blog used to be my first port of call but has gradually gone to pigs and whistles and I don't think this is attributable to the silly season. It sinks … and I make ready to depart. I hope you find what you're looking for in political life, Mr Dale. Hail and farewell.

Mr Dale.
you are in danger of being a caricature of your own self.
Are you doing Widow Twankey in panto at the trinity this Christmas as well?

John Inman must be spinning in his grave.

Couldn't agree more, the links to the other, more serious, blogs is why I stage through here.

Since Peter Bradshaw rated this as a one-star one to avoid, I shall treat your film reviews with a degree of caution...

Without wishing to bring down the mood, the only film I have ever seen in the cinema where everyone stayed to the end of the credits was 'Schindler's List'. But I am sure Mamma Mia was more fun...

If I want film critique, I'll ask the chewing gum splattered hoardes of ferals lurking near the Odeon.

I await your meanderings on "Angus, thongs and perfect snogging" with baited sarcastic breath.

I haven't seen it but I didn't realise how dull and sad so many of your readers are. That's whats wrong with this coutry at the moment, it feels like it is a criminal offence to smile (go on Jaqui, legislate I dare you) but why? I'm pretty happy, and off to see Mamma Mia....

ooh no, i thought it was dreadful. Without the strength of the ABBA songs it would have been one of the worst films of all time

i have to say,iain,the slightly dodgy singing adds completely to the charm of the film.it gives it a slightly karaoke quality to it and allows the audience to relate to the characters more(let's face it,most of us would sound like that belting out an ABBA number).i went with my wife and daughter and we all thought it was sooper dooper!

Aaargh! Too much! How more camp can you get?? What's next - The Village People - the Musical?!?!

Testosterone therapy needed urgently......a beer, a curry and a dose of Men and Motors for The Sweeney or the Professionals!!!!!!

How many people have been to see this film? I ask the question as our gay friends seem to go every two or three days (followed by a visit to the all night Tesco for the soundtrack) So are there lots going once or a few going lots?
Sounds like a better investment than my B&B shares
freedom to prosper

thank you for alerting me as to just how potentially bad this film might be....

My wife and I went last week on her birthday. I was in a state of muttering martyrdom, anticipating that the trailer for The Dark Knight would be the highlight of my evening.

I was wrong. It was absolutely terrific; a bucketful of froth & sunshine - just the thing to see before you go on holiday - or when you get back to keep the feeling going.

Christine Baranski singing "Does Your Mother Know" will stay with me a long time, but there were stacks of other great moments.

All encouraging noises from liberal and gay-friendly Tories are immediately cancelled out by the constant underlying low-level bigotry on display here, and the more unctuous stuff I waded through on the Iris Robinson strand. Probably the main reason I can't ever see myself voting Tory.

What a miserable lot. I'm hetrosexual and I LOVED this film (apart from Pierce's singing)

By writing about subjects other than politics, Iain shows that he has a hinterland and is not just a political anorak.

"They went for big name stars, but none of them could really sing."

Oh, Meryl Streep certainly could! Remember, she was in the running for the film version of 'Evita' at one time. It might have been a better film if she'd got it too...

Not my favourite movie choice, I normally avoid 'feelgood' movies like the plague, but this one actually thoroughly deserved the appellation!

It was a pure delight from start to finish.

Abba were rubbish in the 70s and are rubbish now.
Personally I shall be taking the advice of Mark Kermode and avoiding it entirely - he said he didn't know whether to cover his eyes or his ears during the film.

What is the attraction for gays exactly?

this is one of the few plays i've actually seen, which ended up being great... it's funny to think of ol' Pierce taking a stab at singing, yeeesh