Another PR Triumph for Gordon 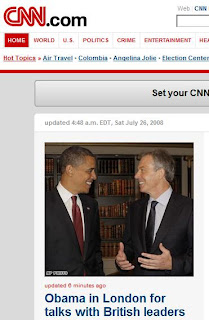 Genius! No one will have heard of the Brown stuff stateside anyway!

I feel some explanation is required!

The only people who recognise Gordon are the British people. He could go anywhere else in the world except Portugal(where he interfered in the McCann case) and be totally unrecognised. That is not the case for TB, many Yanks don't even know that TB is not our PM anymore.

I hope the trolls in No 10 have copied this pic to the 'Southwold warrior'.

Obama thought Blair was still PM ? 70% of the american public do anyway !

Still Gordon was able to show Barack his patio. Look Barack I'm just getting on with the job and I'm totally unconcerned with opportunistic photo-ops unlike my predecessor. Those camera crews? They just happen to be here doing a photo shoot for "Gardener's World - still as they're here.

You might enjoy Matt's cartoon in today's DT
http://www.telegraph.co.uk/news/matt/

Anon @10:24
Obama met British leader TB first. This has rather upstaged GB, who God help us, wishes to be our Dear Leader in aeternum.

This is a problem for GB but not Obama because the Queen, Pope, TB and Osama Bin Laden are the only foreigners the informed citizens of Ohio etc. can recognise by sight.

BTW full marks to whichever BBC reporter described Glasgae East as a nail-biting contest. The outcome was rather mobile-throwing too.

Gordon Brown is starting to remind me of the Michael Palin character from 'A Fish Called Wanda' who you'll remember was an 'animal lover' who inadvertently always ended up killing them instead.

Insert 'Gordon' as the Palin character and 'the electorate' as the animals and we arrive at the current debacle that is ZaNuLabour.

Telegraph has a picture of him biting his nails with Obama

obama is doing a press conference outside number 10 right now.

Another PR triumph for Gordon? Gordon who?


No, no, the monocular monstrosity is 'doing his job' and packing his bags in true ZanuLabour multitasking fashion.

Anonymous said...
"obama is doing a press conference outside number 10 right now.
and gordon is nowhere to be seen.
protocols be damned - this just doesnt look good and is downright uncourteous to Obama."

If Brown did appear with Obama it would upset Senator McCain who might well be the next US president.

When Nixon was a Presidential hopeful he asked to visit Harold Wilson at No. 10 but was turned down because the PM was 'too busy'.

That was one of the reasons why Nixon was cool towards Wilson when he became President.

Curiously, I'm quite happy to see that image. I much prefer it to the embarrasment of having the rest of the world seeing Brown shaking Obama's forearm.

What a train wreck he is.

Chortle! The hazards of being Macavity. Perhaps Broon should get a TB mask - it might lift his ratings.

Seems about right: the former prime minister with the wannabe president. For everyone's information Obama is not president. He is not, technically, even the Dem candidate. And his glorious trip round the world does not seem to have done him much good in the States where it matters.

Iain,can you recommend a 'Labour' blog where I can laugh at Labourite's teeth-gnashing,please?Labourhome is strictly controlled,where can I revel in them getting handed back the contempt they hold for this country?

Now the McBroon has publicly grasped Obama's forearm he has been left irrevocably branded. The curse of the one-eyed son of the manse is now upon him, and it is only a matter of time before his hair grows to shoulder length overnight, his ears shrivel and his face turns white, thus losing him his Unique Selling Point. How can he be the first black president in history once he looks like Michael Jackson?

He's doomed. Doomed, I tell you!

Meanwhile in sunny Southwold it seems people are queuing up to cancel their bookings at the Swan Hotel, where it was rumoured the McBroon and brood might be staying. Very sensible - you don't want to catch anything nasty on holiday.

He is a legend in his own mind.

The Labour Party allowed him to take the PM's job without a fight.

They are as much to blame as Brown with the present situation, and whatever they do they will be remembered as the gutless, weak and toads that they all are.

Just for once CNN may have got it right. And in the picture Blair's nose seems to have extended somewhat. Is this the pinnochio syndrome manifesting itself?

They have just removed the picture of blair.... its just obama.... still no sign of the great leader....!

im sure its been reported that obama's team have said the photo opp with Blair will be more useful to his campiagn in the US than any pictures with Gordon Brown. Ouch !!

Blair and Obama - peas in a pod. Strong on rhetoric, glamour and brains; short on just about everything else, including integrity, wisdom and humility.

Why on earth is this ghastly man being allowed to use Downing Street as a campaign podium? Do we have so little self-respect that we not only consent to abase ourselves, but actually rush to do so?

For once, Gordon got it right - if by accident.

Standing too close to Bush was bad news for Blair. Anyone who thinks Obama is somehow different, and won't drop the UK right in it, hasn't been paying attention.

Not for nothing is the 'special relationship' and 'coalition force' known the rest of the world over as USUK.

The heavily stage-managed rally in Berlin was truly nauseating to anyone faintly European minded. Whatever games the various governments play, ordinary Czechs, Germans and Poles don't want missile bases. Obama's security people banned all protest banners and backpackers of any kind. Freedom? You must be joking. It only looked that way on CNN. Remember the video of toppling Saddam's statue?

We can only thank our lucky star wars that Obama and Blair missed each other in political time frames. They 're both messianic con-men further to the right than any conservative could ever be.

METEOROLOGICAL NEWS: In precisely 17 days' time a waterspout will arise in the freezing brown breakers off Southwold, advance across the gritty, pebbly beach and obliterate the town and its surroundings utterly. Better start packing your treasures and safeguarding your loved ones, Southwoldians. You have been warned.

With nothing better to do this evening I watched the Tele 5 french language station (channel 799 on sky). Obama in London was one of the main stories, they only bothered to show pictures of Obama and Cameron, not just outdoors but indoors - no time for losers?