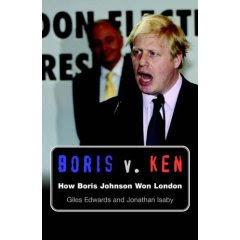 Following the first London mayoral election I published a book called NIGHTMARE by Mark D'Arcy and Rory Maclean. It told the dramatic story of Ken Livingstone's victorious campaign. Eight years on and Jonathan Isaby and Giles Edwards have issued a hastily written tome, BORIS V KEN on the 2008 race between Ken Livingstone and Boris Johnson.

It's a fast paced book with some good political insights and manages to avoid the tedium of many of these kinds of books, which tend to be event, rather than analysis, driven. It is, however, written in strict date order which in retrospect I wonder whether was a good idea. Perhaps it was the only way to write and publish the book so quickly. The lack of an index is also irritating, although again, given the speed of publication, not surprising.

Dual authored books can be a problem as they often display an inconsistency of writing style. It's not easy to tell who has written which chapter in BORIS V KEN, which is exactly as it should be.

This book will no doubt become the semi-official record of the 2008 campaign. It does not pretend to be an acedemic study, but it's written dispassionately, with clear and informed analysis without any kind of axe to grind.