Michael Crick is Promoted at Newsnight 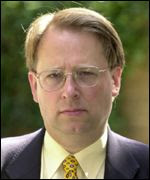 Michael Crick has been appointed to succeed Martha Kearney as political editor of Newsnight. Not sure David Grossman will be too pleased. This is bound to set off another round of media musical chairs.

I suspect Michael will need to change his style a little. He's known as a tenacious, aggressive investigative journalist but that's not really the role of a political editor.

So who should replace Michael as Newsnight's new political story-hound? My suspicion is that he will not be replaced at all.
Posted by Iain Dale at 12:06 am

Another clear demonstration of the inability of the BBC to maintain any semblance of political balance whatsoever. Crick is a blatantly biased, and in my experience dishonest, Tory hater who will undoubtedly misuse his publically funded job to promote his own political views. They should have given the job to Robin Aitken.

What, like the way he says he saw the bottom part of Blair's college photo (in which The Great Statesman is drunkenly giving the "wanker" sign) 14 years ago but did not bother reporting it to the great unwashed until last month?

A good choice. The best on offer at the BBC. Maybe one day they will replace Nick Robinson who is hopeless

I'm inclined to think that Crick simply hates all politicians, regarding them from the outset as a seriously bad thing unless proved otherwise - and after the last 16 or so years, can you blame him?

And I'm a political activist!

Martha said goodbye last night. But I could not concentrate. Who was the gorgeous girl on with her, talking economics ? I thought Paxo was going to stop talking and just gaze into her eyes.

fr, it was Stephanie Flanders - brains and beauty in one package. See here for Jeremy Paxman's views on scaling her drawers, ooh err :-)

As all Crick has produced recently are naff anti-Tory non stories like cripplegate it is clear that the BBC is gearing up for a massive attack on Cameron once Brown becomes PM.

Any attempt for Newsnight to look fair and balanced now is just going to be ridiculous with Paxo AND Crick in the top spots - paying the licence fee is going to end up being the British equivalent of a liberal paying to subsidise Fox News - what planet are we on? Oh yeah the one supposedly boiling to oblivion!

Crick is a political sceptic, exactly who you want in the job, Shame for Grossman but he's a young chap, thing s will come his way.

Perhaps if Crick cannot cut the mustard in his biased style of reporting, a role can be found for him on the Birmingham Mail newspaper, as this is an unbalanced paper which might just suit his stlye better than the political editorship of Newsnight.

fr - that was the gorgeous Stephanie Flanders, obviously dressed up for a night on the razz with Martha.

I did think about emailing them to get them to take a scissors and cut the dreadful fringe of that bloke [Stephen Timms?] being interviewed by Jeremy Paxman.

Did anyone also notice that Stephen Timms juts his jaw out as Brown does, only in his case it goes sideways rather than Gordon's forward and downwards thrust?

Do you have to have a funny jaw to be a Treasury Minister in this Government or is it just an additional attribute in looking a complete plonker when trying to defend the indefensible?

If only you read my blog...

Crick slayer of IDS, fabricator of Betsygate and hero of the paedophile classes.

But David Grossman is fantastic!!
That's a shame.
And Howard- have to disagree: Nick Robinson is not useless!

Micheal Crick is a proven liar, see his role in the Iain Duncan Smith departure, he has no business posing as a serious journalist.

BUT the good news is that Martha is going to front the News at One!