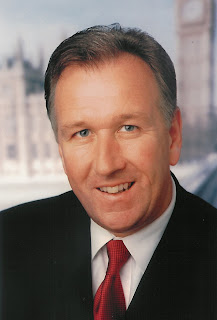 This is the former Labour MP for Harwich, Ivan Henderson. He's just been selected as the Labour candidate for the new seat of Clacton. He's also one of the main driving forces behind Golden Arrow Public Affairs, the company which was exposed in last week's Sunday Times for... well, read HERE and HERE.
Golden Arrow refuses to sign up to the lobbying companies' professional code of conduct. Part of that code of conduct dictates that lobbyists should not hold Parliamentary passes. Ivan Henderson has used a parliamentary pass to gain free access to the corridors of power since his election loss in May 2005. He was given his pass by the Great Yarmouth MP Tony Wright and it was declared in the House of Commons Researchers Register in May 2006, with due reference to Golden Arrow. I have today written to Mr Wright asking exactly what research duties Mr Henderson carried out for him in return for his free run of the building.
I have also asked when Mr Wright asked Mr Henderson to give up his pass, as he does not figure on the latest register, published two weeks ago.
Indeed, has Mr Henderson now availed himself of a parliamentary pass courtesy of the new scheme which allows any ex MP who served for two Parliaments to have a free run of the building? And why did he need a researcher's pass in the first place if he is entitled to an ex Members' pass?
In addition, we should ask the question if there ought to be a publicly viewable Register of Interests for ex MPs who have passes. Surely the public has a right to know who has free access to Parliament and what their interests are?
Declaration of Interest: I have a properly declared temporary Parliamentary researcher's pass for research work I undertake for a Conservative MP.
PS Thank you to all those who have emailed me with further information about Golden Arrow. Very interesting stuff. Keep it coming...
Posted by Iain Dale at 5:57 pm

Silly iain. researcher status allows you to do far more (in MP's name) in terms of using Commons library etc rather than just lounging around the club's bars, engaging in primitive actswith other researchers in the washrooms and sampling coke off the top of the lavvy cisterns).

Iain, not wishing to be picky but its Instalment with one 'l'

But who could resist, eh?

Iain, I'm not saying there isn't anything in this but...

Ivan Henderson has just been selected to fight the new seat of Clacton, which is nominally held by the current Conservative MP Douglas Carswell.

Ivan Henderson was the former MP for the current seat which is Harwich and Clacton.

Ivan Henderson doesn't have a bad chance of winning this seat back. This is partly due to the change in the boundaries and also because Douglas has been a pretty poor performing MP for us.

Do you think there is something behind the story that we're worried we might lose this seat back to Labour??