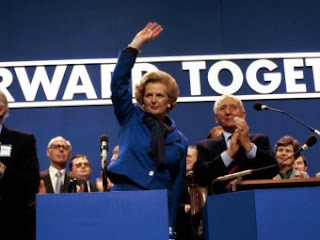 Margaret Thatcher is about to get the big screen treatment. Variety is reporting that Pathe, one of the financiers of The Queen, has teamed up with BBC Films to develop a script about Margaret Thatcher, focussing on the 17 days immediately prior to the Falklands War in 1982.
The project will be written by Brian Fillis, who made his screenwriting debut last year with the BBC TV biopic “Fear of Fanny,” about TV cook Fanny Craddock. Producer of the Thatcher project is Damian Jones (“The History Boys”), who devised the concept with Fillis.

The movie focusses on the 17 days between the departure of the task force and its arrival at the Falklands, when Thatcher was wrestling with her own private fears, facing down the men who doubted her and forging her image as the Iron Lady. It sounds a bit like the original BBC Falklands Play.
What I am waiting for is a full two, but preferably three, hour biopic! More HERE.
Posted by Iain Dale at 7:16 pm

That would very much depend on who made the film. Film producers here and in the States are not known for unobjective productions. There are millions of half-wits in Britain who still prefer Spitting Image's portrayal of Margaret Thatcher to the factual one.

Off topic, but woth reading:

"Brown as leader would be gift to Tories - The scale of the challenge facing Gordon Brown is underlined in a Guardian/ICM poll today, which shows he would hand the Tories a 15-point lead if he headed the party at the next election."

It's a shame that the BBC is involved in the proposed film rather than it just being a US affair. (No doubt Maggie will be portrayed as slightly more evil than Hitler.)

I still think "The Falklands Play" was bloody brilliant (http://www.bbc.co.uk/bbcfour/features/the_falklands_play.shtml). They'd have to go a long way to beat that. Patricia Hodge caught brilliantly Maggie's iron determination not to abandon the Falklanders in the face of aggression by that bully Galtieri, as well as her genuine anguish at what she was asking our boys to do on behalf of the nation.

I still prefer the 2002 Archer spoof movie that had Greta Scacchi playing Madame.

"The Lady IS for turning" sex scene is the funniest piece of television in years, although I imagine our host rather disapproved.

Who on earth could play Lady T?
NOBODY!
It's a total travesty.
She is unique in every way, spirit, voice,gravitas and eminence.
We have never seen her like before and it will probably be a long time after all our deaths before we see another .

although being dead "we" wont see it

Iain - you're a sad sad man

I speak as someone who did his teenage homework under camping gas light thanks to the unions, the three day week and the weak Conservative government of Ted Heath R.I.P.

Margaret Thatcher re-defined political leadership in the post WWII period. As yet, no-one has managed to challenge that re-definition.

I met her once, when she was still in office and I was just another Conservative foot soldier. Despite her elevated status, she made me feel very special. Isn't that a measure of greatness?

Maybe it will only be when she is no longer with use, that people will be comfortable in referring her as "great"?

I have just purchased the book of Thatcherania that you edited. tell me is it any good or should in just glance at the pictures and leave it out to annoy my wife`s trendy friends.

Also when is the three hour biopic of Iain Dale coming out. It might not be all that fastmoving but the sight of aman motionless by a computer for ,say ,24 hours, would have an interesting Art event impact .


( Or is it all this just a "front" for your thrilling life of espionage and ...but then you wouldn`t say would you ...)

She was of course a great woman but she was also rather funny and capable of gently self deprecation quite at odds with the BBC`s retrospective demonisation.

I think myself that such symbols are important. Despite wining every economic ideological and political debate you can imagine in the 80s in the end it was still the Conservative party who were the nasty Party. This was because the left had iron control over popular and especially youth culture.

The daily politics show is organising a poll on PMs and seems to be trying hard to get atlee voted for above Thatcher.

The main difference between the two PMs is that whereas both made a lot of changes to the UK economy, most of atlee's work has had to be reversed and most of Thatcher's has not only been left unchanged but adopted by much of the rest of the developed world.

Cato
Actually there was serious consideration of getting rid of the Falkland Islands.During the early years of the Thatcher government a cross party delegation of MPs visited the islands including Ian Gow,Thatcher's loyal lieutenant,and recommended handing the islands back to Argentina.

This is great news, as when this is made, a movie about Maggie Thatcher prior to Falklands, the next logical movie with be about Blair, prior to war in Iraq.

Blair, the grovelling yes-man who couldn't say no to Bush. How they "fixed facts around a policy." The dodgy dossiers and the lies to satisfy Bush. How one man betrayed two nations to put his sychophantic admiration for Bush before everything else.

I think that actor who played vanity Blair so camply in The Queen should be cast. What better tribute to Blair's legacy could there be? Other than a war crimes tribunal of course.

The consensus appears to be either hero worship or a hatchet job. Is there no Third Way?

What are the odds Helen Mirren won't be offered first shot at the role. Do you think she'll take it?

heard your Today interview this morning. you came across quite well Iain, but "Today" in their usual dumbed down schoolboy Marxism put you up against a Thatcher impressionist. (they never loose a chance to have a go at her)

it was utterly bizarre. the topic was something as serious the Falklands War, not comedy sketch shows.

why didnt they put you up against an Argentine General or a pro-Galtieri nationalist? they really have entered the world of loopy loopy land.

Here's the direct link to the interview from this morning - realplayer required.

"Blair, the grovelling yes-man who couldn't say no to Bush."

by contrast, Thatcher stood up to the Americans - Galtieri was their ally, and Reagan really wasnt in favour of the British sending a taskforce to reclaim the islands. He preferred doing diplomacy with a fascist.

i would guess that her status in American circles went through the stratosphere because of her decision to stand up for Britain.

The money men must have looked at her popilarity figures & decided thais has good chance of working. That is an important lesson.

I am not sure the 3 hour version is a good idea. There is a an old showbiz rule - always leave them wanting more.

It would have to be about the 17 days leading up to the Falklands War. Anything even slightly earlier than that...

Ah Fanny Craddock ... that'll have been good practice for them. Cooking up something rather unpalatable while some Johnnie minces about in the background on the G&Ts. Just the ticket.

Presumably they'll call it Gotcha! ?? You read it here first. But not from Iain.

arthur scargill. hero of the left in the 80s funny how nobody in the labour party mentions him nowadays. airbrushed out of the leftoid mindset like Trotsky.

that says it all.

You were even quoted in a Dutch newspaper concerning this picture. Mind you, it was one the free papers given away at the trainstations.

By describing the three week period between the Task Force leaving Britain and its arrival in the South Atlantic as "before the war" the BBC is deploying the standard leftist hogwash that the war was started by Mrs Thatcher's order to sink the General Belgrano on 2 May 1982. Having been invaded and occupied by Argentina on 2 April 1982 I doubt many Falkland Islanders regarded that period as 'pre-war'.