Mandy's a Quitter Not a Fighter 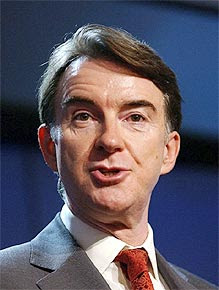 The news that the Prince of Darkness is to leave his £200,000 a year post as Britain's EU Commissioner in 2009 and not seek reappointment will come as a relief to many Tories as well as Gordon Brown. Alan Duncan, the Conservative Shadow Trade & Industry spokesman had unbelievably floated the idea that a Cameron government would consider leaving him in his post. That really could have been a Clause 4 moment. The trouble is it might have caused the resignation of half of David Cameron's front bench.


Mandelson's feud with Gordon Brown is still in full flow and I doubt whether the phonelines between Downing Street and Brussels will be buzzing when (or if) Brown takes over. They could of course email each other to save any verbal disagreement. Mind you, we all know people tend to be rather more aggressive in emails than in conversations. I think Gordon Brown would be most interested in Peter Mandelson's private email address, which contains the word 'demon'. How singularly appropriate.

When he took his Commissioner's Oath he promised to leave party politics behind him. As we all knew, Mandelson has found it almost impossible to do that. Every few months he is pictured at a Labour Party event. Every so often he makes a statement about how awful Gordon Brown is. And today he shares with us his view that it would be far healthier for the Labour Party to have a proper leadership contest. I happen to agree with him, but as an EU Commissioner he really should be keeping it zipped. I do not recall his two immediate predecessors Neil Kinnock and Chris Patten indulging themselves in this manner. I suspect he does it to remind us that he still exists.

The next controversy regarding Peter Mandelson will come in Tony Blair's Resignation Honours List, where he is almost certain to make Mandelson a Life Peer. Let's face it, if Blair doesn't, Brown is hardly likely to.

Attention must now turn to Mandelson's replacement. If there is no election before 2009 it will fall to Gordon Brown to make the appointment. This is a tricky one. In theory he should appoint a Conservative, although there is no convention that says he must do so. Indeed, he is much more of a party political animal than Tony Blair was (oops, past tense already!) so I would not be surprised if he appointed one of his own Cabinet. Of course, he could surprise us all and appoint a Liberal Democrat.

This appointment would have many advantages for Brown. Kennedy is popular in the country, Brown would be seen to be non-partisan and if Cameron won power he would be saddled with a pro-European, federalist British EU Commissioner.
Posted by Iain Dale at 11:44 am

There are a number of reasons why Charlie Kennedy should be kept from the long lunch hours of the Barlaymont. Perhaps Mark Oaten instead?

Sorry that hold have read Berlaymont.

john redwood gets my vote

Like the Oaten idea which maintains the Mandy thread with or without the huncky duncky backing.

"Cameron would be saddled with a pro-European, federalist British EU Commissioner", exactly as her himself would have appointed. Pobably the same man, in fact. And certainly from the same party.

Suspect when the Cons next have an outbreak of sanity the Redwood brain will be needed back home.

What about Lembit Oprick? He's already demonstrated his European credentials by his tie up with the Cheeky Girls?

Ken Clarke for the Cion

Mandy's in today's Mail putting the boot into Brown.

With Mandy on a mission to stop Brown and joining forces with Milburn, Clarke and co, Brown needs to watch his back and keep his nose clean.

Brown has a low opinion of both Blair & Mandy.That's a major plus!

Well if Kennedy were to take the Eurostar, at least the wine lake would be a short-lived problem.

Mandy in the Blair resignation honours, Iain? Surely some mistake from one so legendarily accurate.

I think you'll find that a serving European Commissioner is unable to sit in a national parliament.

I also think you'll find that every UK Commissioner has received a peerage on retirement from the Commission post, whatever the colour of the government of the day. But should you find otherwise, I'm more than happy to be corrected.

ANonymous, that is an interesting point. But I am sure Lord Cockfield was a member of the House of Lords when he was a Commissioner.

The way to get around it would be for him not to take his seat until his term finished I suppose.

Iain,
Mandelson (nor any other COmmissioner) promises to leave party politics behind on appointment. He still remains a member of the Labour party, and being Commissioner doesn't change that.
What is important though, and what they do make an oath to do is to leave national issues behind. He's not the UK's Commissioner, but the whole EU's and should work in everyone's intersts.
That's where the more important distinction lies I tihnk.

As for a successor....how about Ken Clarke?

Bill Cash gets my vote.

think you'll find that every UK Commissioner has received a peerage on retirement from the Commission post, whatever the colour of the government of the day.

So what? Nulab have changed many valuable conventions and institutions to serve themselves and in the name of their wholly bogus, alleged ideology of anti-rich git 'social justice'. So it would be par for the course for Cameron's new government to snub Mandy and give him nothing.

However, I've read that Cameron and the Conservatives have had talks with Mandy. Is this true - and if so, have they done a deal?

Auntie Flo'
What worries me

Gordo will need a new face in Europe-Mandy may tango off to South America!
PS-has Mandy got new teeth?

Of course, Blair could make him a hereditary peer, which doesn't confer membership of the legislature any more. I'd guess that Mandy is unlikely to have any kids, so the title would die with him.

Viscount Mandelson? The Earl of Islington? The Duke of Notting Hill?

Lord Swivel-Hips of Rio has a ring to it.

Lord Mendacioso of the Amazon

I see Bremner used your "quitter not fighter" line this evening.

Iain, I am a little surprised to see you sticking up for the notion that EU commissioners should be subservient to the anti-democratic notion that the needs of the EU over-ride the needs of each nation individually.

I think this is a notion which the French seem to adopt with a fair degree of, how shall one put it, flexibility..

why should this oily reptile be rewarded for anything hes done, he is a crook and a liar if he wasnt bliars friend he would be in jail.His only redeeming feature is his hatred of bruun.He belongs in the same group of
failures as kinnock and foot.

I know "The trouble is it might have caused the resignation of half of David Cameron's front bench" is a joke but it shows the extent to which politics is about personality not principles that this is what would do it.


The Count of Man del Christo


Peter, the Scourge of Chinese Knickers