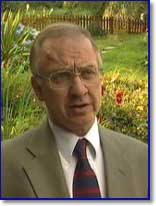 David Jamieson was never a very distinguished Government minister - doling out a few million for canal barges in Yorkshire, unveiling national motorbike strategies, that was about his level. Probably the only thing he was known for, if at all, was being interviewed on live television about his work as Roads Safety Minister while a pedestrian was being knocked down by a lorry in the background. When he stood down from Plymouth Devonport in May 2005 to spend more time with his Transport Consultancies not even Tony Blair considered him good enough to join the ranks of noble nonentities such as Lord Lipsey.

With Golden Arrow taking a few bumps, I wonder if Jamieson got has himself involved in another accident now? His "no claims bonus" looks good: according to the Dept for Transport accounts for 2005/6, he received a severance payment as compensation for loss of office of £7,293. Not much perhaps - but aren't you supposed to get severance payments for being made redundant, instead of deciding to quit? I wonder if that was tax-free, courtesy of the tax-payer. According to the Sunday Times reports, now he is a consultant with Golden Arrow, Mr Jamieson charges £250 per hour for, er, phoning his old colleagues at the Dept for Transport - so the "third party cover" is pretty generous too. But not only does Mr J consult for Golden Arrow, he also works for another lobbying consultancy, Sovereign Strategy, a fact that his colleagues at Golden Arrow aren't that happy about by all accounts.

And no speed traps for Mr Jamieson: he forgot to clear his new Golden Arrow job with the Sir Humphrys (you know, the kill-joy committee that's supposed to stamp out conflicts of interest) but that hasn't stopped him zooming off with his new career. Still, like the speed limit, that must be a rule that doesn't apply to special people, eh?
Posted by Iain Dale at 5:35 pm

Mmmmm 54 hours and counting with no ID links. Cold turkey. But I'm resolute. It was only supposed to be 24 hours ... perhaps I could just do a little one. I think this is a very minor story for so many posts which are of modest innovation. The original Times one didn't stack up. No cash for access. Amd comparison with other lobbyists to show unfairness. Almost as much of a non-story as Gordy NOT Uncle Joe shock, or is he?

Although for me probably only the 2nd I've looked at.

Trust me, you need to summarise what the story is here, because no one else has got a clue. Some people have read episodes 0,1 and 2.

Trying to make sense of it is like listening to the Archers on Monday, Wednesday and Thursday and thinking you will just be able to 'pick it up as you go along'. Great idea, but it ain't gonnae happen..

Anonymous, good point. When I do the next instalment I will do "The Story So Far". There is a lot more to come. Indeed, I am thinking of making a little film report about soon.

iain
do you know of any lobby companies that have helped david davis in the past?

this one just isnt going to be your cash-for-honours Iain.

yes Iain, a lobbyist isnt meant to be a front man but is meant to build strategy and campaigns for clients which the client then communicates. but what proof do you have that in every single on of the meetings GA has with ministers they are not accompanied by clients, or speak of anything else but their clients.sometimes a client may cancel on you, and you have to go alone and represent.

Lobbyists, and i'm sure you included Iain, will always use a personal contact to say, hi mate, this is what i'm working on, this is who they are, will you be interested in meeting them. why shouldnt they? politics isnt perfect but informing friends that happen to be ministers about what you are working on and asking if theyre interested isnt a crime. and how do you know that Ministers havent refused GA client meetings before? you're dangerously speculating Iain.

Iain,
why are you making "waves" when you havent answered my question about david davis.

I haven't answered your question because I haven't got a clue what you are on about.