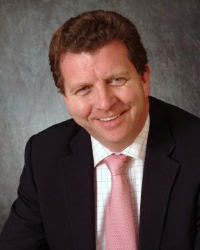 Does Golden Arrow Public Affairs rely rather too heavily on its relationship with its two particualrly cooperative (some might say 'tame') Ministers, Gerry Sutcliffe (pic) and Stephen Ladyman. Proof of this comes from a lunch which Golden Arrow Public Affairs organised for the Haven Gateway Partnership with Gerry Sutcliffe on 3 March 2006 in Clacton.

The Haven Gateway Partnership consists of the ports of Harwich, Felixstowe, Ipswich, Colchester, Harwich Navyard and Mistley. All would no doubt have been lobbying for the approval of the Bathside Bay Container Terminal project. Coincidentally, final approval was given by Transport Minister Derek Twigg only three weeks later.

At the time of the lunch Gerry Sutcliffe was a junior Minister at the DTI (he's now at the Home Office) in charge of competition policy, employment and consumer affairs. His role as competition minister is particularly relevant here as Felixstowe's main competitor is Associated British Ports, who had a similar expansion plan in Dibden Bay in Southampton turned down. ABP might well have objected to Bathside Bay on competition grounds. I wonder if they were also given the benefit of a lunch with the Competition Minister?
The lunch and guest list was organised by Golden Arrow, who count Hutchison Whampoa and the Port of Felixstowe among their clients too. They also paid the bill recharged it to their very grateful clients!
Now, the question is: did Golden Arrow arrange for a similar event with their other 'pet' Minister, Stephen Ladyman?
Over to you... you know the email address.
Public affairs consultancy is a totally honourable profession, but, when it's dragged through the mud by people whose only skill appears to be opening their bulging contacts book, it's not difficult to understand why public affairs consultants no longer like calling themselves lobbyists.
I was a lobbyist for nearly ten years and I can spot this kind of lobbyist a from a mile off. The ethos of companies like Golden Arrow seems to invokes all that is wrong about lobbying. One can only hope that their clients will slowly be coming to that conclusion themselves.
Posted by Iain Dale at 9:01 pm

This does seem rather convoluted.

Is anyone in the general public, as opposed to us political geeks, going to understand this ?

If they do, will they be in the slightest bit interested ?

Lots of lobbyists meet politicians, it's kinda what they're for. And lots of politicians make policy.

Proving linkage between the two is going to involve more than vague supposition and bland assertion.

Maybe a slightly punchier summary would be more useful than acres of backstory which is more confusing than an omnibus edition of East Enders.

Nulab yes men perhaps, titillating for the rest of us. Until one of you muppets gets sacked. Then it's really, really, funny.

I have a problem in that I suspect Gerry Sutcliffe is intellectually retarded as a local MP. I am now asked to consider him not as intellectually-retarded but ethically-retarded; I do not know which is his exceuse for his behaviour, but I certainly think his voters in Bradford-South should be asked to comment by any competing candidates

I'm sure that's what they said about Nazi camp guards.

I think you're very right Iain, and this story is massively damaging to the public affairs profession.

All the more damaging because very few understand what it is lobbyists do, and their misconceptions are compounded by stories like this.

And you're also totally right about this type of lobbyist. we can all see them a mile off.

it is infuriating when ex-mps enter the industry with only the experience of being lobbied (which if it was done well, they wouldnt be aware of quite how it worked) and then think they are experts. In my opinion, MPs arent in a position to offer strategic political campaigning advice with no prior experience. all they can offer is contacts, and here is a great example of where that gets you. its lazy lobbying and does no one any favours.

i dont necessarily think this is a sleaze story. its just a guide on how not to lobby.

As a client of "public affairs" agencies for many years, I'm afraid that very few lobbyists know what they do either. The level of understanding of Government is appallingly low and the most highly prized skill seems to be the ability to sell worthless services to people more stupid than them. Golden Arrow's conduct may be reprehensible, but most lobbyists should also be ashamed of themselves for offering little more than presentational products.

Liek is said, there are good and bad. I'm sorry you have experienced the bad. I think its all down to a understanding of what is and what isnt achievable. if you promise a client the earth, and then can't deliver, you're going to look bad. if you manage expectations, set a realistic work plan with agreed achievable targets that you work hard to deliver, you can't really go wrong.

There are enormous lobbying success stories out there. too many lobbyists think its about champagne lunches and loitering in Parliament. its not, its about research, expertise, knowing the law and politics inside out, and hard graft. some know that, others, like the one anon experienced, and GA, quite simply, don't.