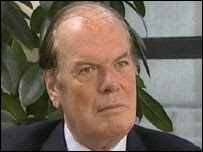 This is Quentin Davies, Conservative MP for Stamford & Grantham. He was the only Conservative to vote for the Government's Incumbency Communications Allowance. Shame on him. All the other Conservative MPs who voted, voted against it. The LibDems split roughly evenly as far as I can see.

This vote showed Labour MPs at their worst, but all credit to the two Labour MPs who voted against - Kelvin Hopkins & Lynne Jones.

It may seem like cutting off their noses to spite their faces but I hope those Tory MPs who voted against this outrageous abuse of taxpayers' money will refuse to take their allowance. It would send a real signal that things will be different under a Cameron government. A further signal would be for David Cameron to announce that this decision will be reversed as soon as we come to power.

Read the full debate HERE.
Posted by Iain Dale at 12:39 am

I wouldn't quite say it is shameful, but still, its one extra way of MPs wasting taxpayers money.

Anyway, who cares about Quentin Davies, what did you think of Gudio on newsnight?!

The only possible justification is that Stamford is still looking for someone to communicate with.

I noticed last time I passed that way that Oakham had proudly twinned with Paris. How about Stamford/Washington?

Mr Davies is MP for Stamford and Grantham. Spalding has to put up with the loathsome John Hayes as our MP.

So that's alright then.

I agree with you Iain. And I also hope the parties (UKIP included) that oppose the extension to state funding refuse to take their "entitlement" too.

Well done Iain for highlghting this - and well done the new Conservatives for refuaing to sup at nulab's trough!

Please name and shame each of the the nulab MPs who voted to squander even more of hard working people's taxes.

How much is this latest rip-off being publicised in the media? Not much I would guess. The poor little lambs wouldn't want to upset their chums in parliament now, would they?

the debate was horrid, all the Labour MPs coming up with fantastic justifications; the best was "could those not voting for the increased funding be open to the accusation they do nothing for their constiuents".

ALL Torry MPs should donate the money to charity and embarrass the thieving, grubby Labour MPs trying to fill their boots before being kicked out in 3 years time

whata bout a wepage with photos of all the MPs who voted for the money?

Now what about some legislation to make sure that the MPs pass on their annual cost of living increase on the salary allowance to their hard working staff. Too many of us have to beg for it and most of us don't get it. It amounts to a decrease in pay every year. Of course there is one well known buffoon of an MP who brags that he pays his staff the absolute minimum. This is the very same one who pads his already generous pay with lucrative committee work.

I was incredibly pissed off when I saw his name on the ayes last night as it wrecked the press release I was writing. I do hopw we don't make use of the allowance and pledge to scrap it.

The suspicion will be that this money will substitute for money the Labour party would have had to spend in its constituencies. Does communication mean monitoring blogs ? Issuing comments? (Anon - or Astro turfing on the tax payers expense ?).

As a resident of Castle Point I am disgusted at our MP with his snout in the trough.

It is a fact that Spinks has little credibility with Castle Point Conservative Association as his continual support for the Canvey Independent party and it's leader have shown.

This support for an opposition political party in Castle Point clearly has an objective, in that, should he be de-selected he will stand as an independent with a power base on the Island.

Some moral fibre, then. Cameron should do as you say, and while he's at it announce a lengthy list of other 'legislation' to be withdrawn.

David Davis has already made similar noises - to public acclaim.

This is a definite for your next Book Of New Labour Sleaze.

Praguetory, you idiot. Why would this be sleaze. Surely communication is one step closer to better democracy. Dickhead.

Bob Spink was always a dismal communicator as Castle Point MP. He only upped his game after he lost to Christine Butler and then regained his seat.
Saying that though, I can't imagine why he's bothering taking £10,000 to "communicate" with his constituents. What he really needs in Hadleigh is a megaphone for the OAPs and big picture cards with single syllable words on for his Canvey Island chavs.
You'd think a man with a doctorate in nuclear science would have thought this one through better...

In my book communication is a two way exchange. Given that is the case, where's my cash bonus for 'communicating' with these clowns? Gimme 10 grand to spend on 'communication' with New Labour and I'll be quite cheerful, too.

As it stands, 'communication' with my local MP and/or his cronies and henchpersons is entirely one-way. Frankly, I'd rather the money went somewhere useful. His occasional glossy colour leaflet coming through my letterbox is the signal for me to get the Zippo out. If I want to hear from him I'll let him know, believe me!

This is just another cash hand-out wheeze introduced by the snout-in-trough politicos. The sooner these guys become bacon the better.

I believe the taxpayer should pay me a modest £2,000 a year for reading political blogs and banging on about them to my wife over breakfast.

This would be cheaper than the communication allowance and just about as much use.

Just out of interest, where do you stand on MPs not taking up salary increases until they're re-elected? There's a provision for that in the US, and it's been advocated here as well. I think I'm right in saying that Enoch Powell always did that on the basis that he had a contract with his constituency for the life of a parliament.

I've heard that the Conservatives put a 3-line whip on this vote - if that's true, why did Davies go against the whip? Can anyone get him to respond?

And off-topic, I know we have Care in the Community, but does this have to extend to putting up with Manic's ravings?

they were probably pissed and staggered through the wrong Lobby. Again...

And also off-topic, but didn't Quentin Davies get prosecuted for animal cruely - apparently he left hundreds of sheep to starve in his fields....?

That is how British politics now works, and will carry on working for so long as we, out here in the country (where all parties except the ill-fated SDP actually start), continue to allow it to do so. We need entirely new parties.

Exactly the same was said in the 1960s when Labour wanted to introduce an allowence for secretaries and researchers !

If the Conservative party wishes to re-engage and particulary with younger people, then MPs should communicate more often - use web sites etc. And of course, web sites are not cheap, as Mr Dale knows, he used to own a web producing company - and they were not cheap !

He seemed happy to take money off MPs from their allowences then !

"A further signal would be for David Cameron to announce that this decision will be reversed as soon as we come to power."

Do dolphins shit in the woods?

This is one of the classic things that oppositions posture about but never reverse if they get in.

Not much different to those House of Commons rules which Cameron got up-ended on this week but which hold no serious con-back for offenders at all. Protection of Incumbents in the Biggest Club in the World Act (Insert any Date You Want)

Don't know who Oakham is twinned with, but the village of Whitwell (half-way between Oakham and Stamford) has twinned itself with Paris. I do hope you weren't driving on your passage through Rutland.

Stamford is twinned with the charming Provencal town of Vence. We're not in the market for extra mailshots from Q Davies, though Grantham or Bourne may be.

Charlotte Corday, I assume you are talking about a select committee or standing committee chairman, since they are the only ones to be paid extra. Care to give a name?

Take your pick - there are many. This one in particular is old and pompous.