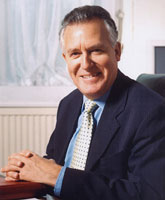 Earlier this week GUIDO FAWKES got his handson a strategy paper outlining Peter Hain's supporters in the Labour Party Deputy Leadership race. The author was 'carberryj' who just happens to have a parliamentary email account.

His Parliamentary log-in id would be ‘carberryj’ as a result [see the “alias” entry above], and the way that computers are set up in the Commons, the default ‘author’ of any Word documents [used to create the document before it was PDFed]would correspondingly be ‘carberryj’. This raises the question – has Peter Hain been using House of Commons facilities (funded by the taxpayer) to further his leadership bid ? 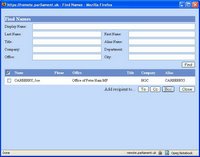 He’s not been allowed to use Ministerial facilities (see PQ below) – and he hasn’t yet opened a campaign office (as you will recall, during the 2005 Conservative Party leadership race, the various teams set up campaign offices outside Parliament).

January 8 2007
Mr. Heald: To ask the Secretary of State for Northern Ireland what guidance he has issued to his special advisers concerning alterations to their duties during the campaign for the deputy leadership of the Labour party. [108495]

Mr. Hain: Special advisers act in accordance with the requirements of the “Code of Conduct for Special Advisers”. This makes clear that special advisers may assist with a leadership or deputy leadership campaign, but it must be in their own time. In addition, the Cabinet Secretary has issued guidance to Departments on conduct in the run-up to such elections. A copy has been placed in the Library for the reference of Members.

Er, no. Word templates retain the name of the original author of the template, so all it proves is that carberryj authored the template - templates are widely used to generate thousands of documents all over the internet.

It seems entirely reasonable for an MP's researcher to use his home laptop to do official work and have a quid pro quo arrngement with his boss about using the work facilities for the odd private thing. Same for phones, faxes, internet access etc. Given the geeky supplicant nature of many of tese researchers the MP (and constituents) wins out on the deal, I would say.

The line is obviously crossed when there's someone on a parliamentary salary whose contribution to the official parliamentary work is not, viewed by a neutral observer, to be particularly obvious. I thought this was the criticism thrown around by certain A-listers about a certain Mrs Smith.

you lost me at the bit you mention 'alias entry'...can you explain in a slightly more comprehensible language - preferably English,.

There is no such thing as trouble for Peter Hain. Any misfortune which greets the permatanned one is nothing but analloyed good news, as far as I'm concerned.

As with the Barack Obama story, Iain Dale has got this one completely wrong. Still, anything for a smear!

I am starting to wonder about something though - there seem to be a lot more blog posts critical of Dale since he removed the pre-screening of blog posts a short while ago. Presumably this is evidence that Dale was removing a lot of critical material?

Anonymous, 8.28. it proves nothing of the sort. It just means that in the last weak I have tweaked the toes of a few more lefties who don;t like it up 'em. i do not delete comments unless they contain abuse and a series of 4 letter words.

Iain, you might think I'm astroturfing, but isn't there a danger of opening up another flank in the 'war on error' against Nulabour ?

To have two fronts, Cash-for-Honours and the Smith Institute might be ok - but to have a third one against Hain might be disastrously foolish. Why, it might be like deciding, once one was embroiled in a war against Afghanistan and Iraq, to open up another one in Iran....

And nobody would be stupid enough to consider that, now would they...

Way back there was this Labour MP called... erm... Robert Maxwell. Yup, the famed Cap'n Bob.
He had a spot of bother over a company he ran called Pergammon Press, and suddenly all his hangers-on were rushing about trying to cover their arses and attacking all and sundry in an attempt to divert attention from themselves.

Private Eye did a wonderful cartoon of a sinking wreck, with Maxwell as the ship's figurehead and lots of rodents leaping overboard. The caption:
"Rats leaving a sinking shit."

Wondrous how history so often repeats itself.

Iain, you should take a look at the games Peter Hain has been playing with the electoral system in Wales and Scotland. The Westminster Cabinet, of which Peter is a leading member has just responded to recomendations made in the 'Arbuthnot Report'. The Cabinet has agreed that it is ok for a 'constituency' candidate to also be a candidate on the party list in the Scottish Parliament elections in May - while banning the very same thing in Wales. It is a contempteble example of constitutional adjustment for party advantage. the relevent recomendation and response are on my blog.

Peter Hain probably did more to bolster support for the Apartheid regime than anybody else.

PLEEEESE can we lose the ANNOYING snap pop ups?

Martha Kearney on Newsnight has just claimed that a "senior police officer" at Scotland Yard has informed her that "no charges will come out of the Yates' investigation" and that they are only going through the motions to deter accusations of a whitewash when they announce soon that no-one will be charged.

Gavin Esler did not press her on this revelation and it was allowed to stand without further comment.

So what the hell is going on?

Anon @ 8:45 - no probs with opening up a new front; the beauty of politics is that (to continue the military theme) the 'lines of logistics' are very short for those on the offensive.

In fact it's like guerilla warfare, guerillas can keep a static enemy permanently guessing.

These were the tactics advocated in opposition by the great Iain - Iain Mcleod, of course.

Why are the BBC (Newsnight's Kearney) spreading it around that no charges will arise from the cash for honours investigation after an, apparent, tip off from a senior plod at New Scotland Yard?

Iain Dale needs to be very, very worried right now. My information is the Observer have a specialist team working on him and a full spread special exposing his blog and TV channel is planned for the next couple of weeks. Apparently they are focusing on the smears he apparently gets away with and his sources, as well as the financial side. Someone big is also planning to sue Dale, so he'd better check that his house is in his wife's name.

Anonymous said...
Iain Dale needs to be very, very worried right now. My information is the Observer have a specialist team working on him and a full spread special exposing his blog and TV channel is planned for the next couple of weeks. Apparently they are focusing on the smears he apparently gets away with and his sources, as well as the financial side. Someone big is also planning to sue Dale, so he'd better check that his house is in his wife's name.


You New Labour trolls really are shitting yourselves aren't you?

You're on the way out. Live with it and good riddance.

I'm surprised that Iain thinks he can continue to lie, smear and distort like this and have no come-back. It's just not a very grown up position. Get real - this is not a game. Every dirty little dog ends up peeing upside down in a gutter.

I have always seen Evan Harris as an aspiring Peter Hain, they have many similarities - but I think Hain is nearer Miliband on the Sincerity Stakes.

My Commons computer always tags my work with 'THoP1' (for, I assume, "The Houses of Parliament")

Anon 7:21, very funny, and also I think you may well be on to something there, but I reckon it was years of cannabis abuse in his former "liberal" incarnation. That glazed, slightly manic look is straight out of the Herbal.

Troll Iain-haters, have you considered for a moment that it may just be that the entire country is deeply pissed off with New Labour, and therefore that Iain is just capturing the popular mood?

Peter Hain is an odious, cowardly selfcentred politician. He is exactly the type of person who ruins politics. A shameful individual in every way.

Isnt it great seeing teh reaction of these NuLab twats. They cant sue anyone can they because it's all true! You must be very worried! I will happily help fund your legal bills over the Sith "slur", especially when you get to call Gordo, Balls etc

Dont forget to post any threatening letters from two-bob lawyers. I think you have enough supporters to scare the living daylights out of them if they try to get heavy.