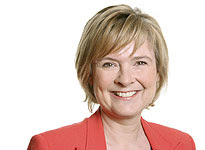 Tonight's Newsnight email brings the devastating news that Martha Kearney is quitting her job as Political Editor to take over as the new presenter of the World at One on Radio 4. She will be a great loss to Newsnight as her contacts book is unrivalled and she's one of the nicest journalists I know. The only time we have had a cross word was after her 15 minute profile of David Davis during the leadership campaign. But she was so nice about it that it was me that ended up feeling bad. Quite a talent. I hope she likes her new lunchtime perch.
Posted by Iain Dale at 5:34 pm

I endorse your sentiments Iain.

slightly behind Wikipedia with that one Iain? Must do better eh?

I shall miss her on Newspite, but she'll be good on WATO. Let's hope she leave Wimmins Howl and it can sink into the swamp it belomgs in.

I'll just have to dream about those dimples from now on.

beachhutman - how can you say that about 'Woman's Hour' ? That used to be my 'breakfast radio' that did.

About the only time I ever got in touch with my 'feminine side'.

Agree with you Iain- it is a shame that Newsnight are losing her. David Grossman for Political Editor, anyone? Or is that just me?!
P.s: Martha's switch couldn't possibly be anything to do with the 'streamlining' of Newsnight journalists, could it?

She couldn't get the BBC political editor's job: they had to go to ITV for Robinson instead. And he's crap.

She claims to be a parliamentary reporter but I remember her saying "I don't know the process" about a private notice question. This is basic stuff really.

The quote I always treasure from her is "the Blair government will be remembered for its constitutional reforms". Sorry?!

Her usual report goes like: "I'm so important, I was speaking to a cabinet minister today, and he told me -insert latest Standard headline-. Clearly this is worrying for the government."

No, she was out of her depth on Newsnight. The WATO will be worse with her, no question.

A waste. She's a good presenter, but on telly, not on the radio.

I was amazed she didn't get the Channel Four Pol Ed's job ahead of Gary "Funky" Gibbon.

It could have been worse, they could have given it to that ghastly Caroline Quinn, the one who always sounds as if she's so busy listening to her producer and trying to read words of more than one syllable in her script that she can't concentrate on her interviews. And if she could, she wouldn't understand anyway!

World At One turnoff....John Knox was right about the monstrous regiment...the BBC seems to hire airheads and bimbos - where did Sheena MacDonald go to ? She was competent

This is a tragedy, well, not good news anyway. MK made Newsnight Review tolerable by quietly stimulating a genuine discussion and letting the critics have their say. This is in contrast to Kirsty Squawk who shuts down all debate so she can voice her (oh so predictable) opinions at every opportunity.

Martha's switch couldn't possibly be anything to do with the 'streamlining' of Newsnight journalists, could it?

Iain, I don't mean to be picky, but how is it OK for you as DD's man to have a go at Martha, but not OK for Labour spinners to have a go at journalists - they get called control-freaks and worse. Surely better to just let them get on with it? A bit like arguing with the referee in football! Is it all about trying to influence his next decision?

I never watch the TV but listen to Radio 4 a lot. I think Martha Kearney is an excellent World at one presenter.