One Way to Revive Interest in Parliament 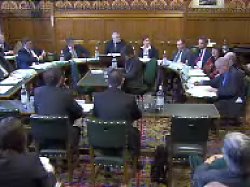 No national newspaper has a parliamentary page any longer. The broadcast media barely covers parliamentary proceedings apart from the Today/Yesterday in Parliament on Radio 4. So I have come up with a simple way for Parliament to bypass the mainstream media and have a stab at reviving interest in parliamentary debate.

So here's a thought. Why not do two things? First of all start a Select Committee Blog on the Parliament website, which would be written in an accessible way and highlight all that's going on in the Select Committees. Second of all, Parliament should start its own Internet TV Channel and stream not just the proceedings on the floor of the House but also Westminster Hall, the House of Lords and Select Committees of both Houses. Each session would then be archived for On Demand download. It would certainly not cost the earth to do and would be a genuine public service and a great way of opening up Parliament to a much bigger audience. Perhaps then people might realise that MPs so really valuable work even when they are not in the main Chamber of the House.

There is already a Parliament Live Channel HERE but you could be forgiven for not knowing about it. It's got a tiny little click-thru on the Parliament Website Homepage and it's not comprehensive enough. With very little extra expense it could be made into something really interactive and all-encompassing.

The parliamentary website had an overhaul not that long ago but it is difficult to navigate and not particularly well designed from an aesthetic point of view. Unfortunately the website is run by the Serjeant at Arms Office, who are the most difficult and intransigent people you could ever hope to work with. Many an MP has been drive to the verge of tears by their 'can't do' approach. It is they who are the barrier to technical innovation in Parliament and it is the politicians who need to assert their authority over them.
Posted by Iain Dale at 4:26 pm

The British Embassy in Belgrade helped the Serbian Parliament to set up a live Internet feed back in 2001/02 as part of post-Milosevic democratization. Cheap, easy and effective even using the primitive technology of those distant times. Maybe we could politely ask some cyber-Serbs to advise us on how to make this work at Westminster?

Good idea, but per your comments on getting things changed, well all I can say to you is Judy Scott Thomson ...

It is breathtaking how slowly people at the top of the political tree react to these kind of things. Do they have any idea how important the Internet is to the future of British politics? At least Cameron is making a tangible effort - good on him.

On the day when the increase in the BBC licence fee is announced, would it not be a good idea to translate your idea into an expanded version of the BBC Parliament channel, to cover all the debates, Select Cttees and Westminster Hall, with some (but not too much) degree of interpretation? Similarly, the BBC website could be used for archiving and viewing on-demand material. All the coverage to be made available via terrestial, Freeview and internet means so that it is accessible as BBC1. The channel already exists, it wouldn't cost much to expand it and promote it via the BBC website and it could be seen as part of a public broadcaster's service obligation.
The Scottish Parliament has coverage through Holyrood TV - see www.holyrood.tv - but it is well hidden on the Scottish Parliamentary website. The National Assembly of Wales has a live broadcast feed on the internet and makes archived material available - see www.webcasting.wales.gov.uk/ So both devolved bodies are well ahead of Westminster in this respect!

I don't dispute what you say but...

...Why not get people in Parliament who actually represent their constituents - i.e. they reflect the views, experiences & background of the electorate rather than dictate, impose and force their will upon us.

Please don't pretend what we currently have (or have ever had) is representative.

First, the Commons authorities will reject your (very good) ideas as "impractical." Then, in about two years' time, they'll implement them, by which time the technology will no doubt have moved on again.

At least you'll be able to say you thought of it first....

Add to the wish list always-on audio feeds from both chambers plus select AND standing committee sessions. Some of us political anoraks have wifi radios don't you know.

Also, why not a red button on the sky/cable versions of the parliament channel so we choose which chamber we want to watch live. Most of this costs nothing or very little. Just inertia getting in the way.

Colin - IIRC it only costs about 80k to put a new station up on SKY. Would be nice to have some bbc political output unmediated by tory boys andrew neil and nick robinson.

Perhaps if the BBC had been given the license fee increase they wanted they could have done it. It doe seem odd though that parliament itself cannot do these things. I am in complete agreement with Iain on this.

One way to revive interest in parliament... doubt it... they would be better of with a myspace page and a bebo page!

One Way to Revive Interest in Parliament - sorry it's a bit late and I dropped off before I got to the end of all this. Are you sure Parliament needs its interests revived?

Iain this is a great idea! They could implement it in such a way as to really open it up to the web.

For example, wouldn't it be great if bloggers could embed clips of the proceedings into their blogs, directly from the archive site? That way, bloggers could share the good bits they've unearthed with the rest of the world and also use the clips to back up their articles.

Couldn't the Handard be used alongside the videos to make it machine searchable? So rather than having to delve through it all, you could jump to a particular persons speech or even search for when particular topics are mentioned?

I'm sure if they only opened the data up for people to access alot of innovative and useful projects would be born.

Unfortunately though, government is only just catching up to web 1.0, I think it will be sometime until they reach web 2.0.

Your idea is interesting Iain.

Many years ago I used to read Hansard occasionally in the local library. Then the PM, one Margaret Thatcher abolished the subsidy paid to distribute Hansard to libraries and it disappeared.

I surmised that Parliament was going into Secret Session as it did during WWII and that we no longer needed to be aware that There Is No Alternative for The Leaderene had resolved we must simply obey.

With Westminster being run in the same dark way as the Council of Ministers and the EU it seemed that this was the new Order of Democratic Centralism as it permeated local councils and quangoes.


Perhaps if the BBC had been given the license fee increase they wanted they could have done it.

Doubt it for three reasons.

1) Money is not an issue here, it would cost them the lose change in Jonathan Ross's turnups.
2) They would lose the opportunity to put a left wing spin on everything.
3) This would be true public service broadcasting, which might set a dangerous precedent

I that you'll find that the parliament website already has archived recordings for the last couple of years.

I think there's also coverage from the house of lords and select committee audio.

I accept that it's not pushed in your face, but it only took a quick google search for me to find it.

Darryl, you didn't read my article properly. I said that they do live stream to an extent but it is not comprehensive and no one knows it's there.

I share your disbelief, Iain. I can't believe there isn't more coverage of the day-to-day goings-on of Westminster. Even supposedly serious newspapers like the Telegraph now merely resort to parliamentary sketches, which are normally just an excuse to poke fun at politicians.

A lot of good work does go on every day in the Commons and the Lords, and it's sad that only the bad bits ever get news coverage. To read and hear the speeches of experienced politicans like Ken Clarke in full flow are a delight to behold. The drama aside, there are very important decisions made every day that impact on all of our lives. We can't rely on the established journalists to keep us informed.

The people of this country fought against the Establishment in the late eighteenth and early nineteenth centuries, with certain pioneering individuals eventually able to report daily on what went on in Parliament. Today we have the tools to watch every cough and sneeze, and have it recorded in high definition for posterity, but we don't.

There's definately potential for a blog that would provide a daily digest of debates and votes, not to mention recordings of debates. If only I were still a layabout student with the time to do something about it ...

imagine the cameras scanning the the beautiful mother of parliments the subdued sound the camera cuts to the long shot showing both sides of long green seats ,very empty seats , apart from pmq and a few other bits , what will we see or hear on internet remember bt the isp's have a so called fair usage policy some blocked down to 2gig ,so are you going to waste your time looking at empty seats and use up your quota ,dont think so

Good idea Iain, this is what the internet should be for, but some of the comments are worrying.
God help us if the BBC get involved in this. By the time the guys from Broadcasting House have finished gold-plating the service the budget will be in the hundreds of millions and we'll be able to get a live feed from Chipping Norton Parish Council with signing for the deaf.
Why doesn't 18DS tender now you've overcome your streaming woes?

www.holyrood.tv is an excellent model for this. It was set up as a direct result of the Scottish Parliament's desire to be much more accessible to the people than Westminster is - qf. select committees sitting in cities other than Edinburgh and a dedicated Petitions committee of MSPs being set up to review petitions from the public.

Dealing with the Sergeant at Arms office is like pissing into the wind.

Brilliant idea Iain, both to bring parliament and politics further into the modern age (MPs blogging helps in this regard, as does your own).

Not sure, however, what effect it would have on improving political awareness.

Unless we GET OUT of the EU any form of tinkering is pretty pointless. Parliament is just not important enough.

It would certainly not cost the earth to do ...

Ahem! This is government you're talking about!

the video and audio link is right under the links for lords and commons, thats hard to find? perhaps you need your eyes checked. Or maybe check your facts before running your mouth off...

Within the Video and Audio service you'll find live and archived footage from the Commons and Lords chambers, Westminster Hall and many committees.

And, the website isn't run by the Serjeant at Arms Office - that would be the responsibility of the new joint Parliamentary Information and Communications Technology (PICT) department.