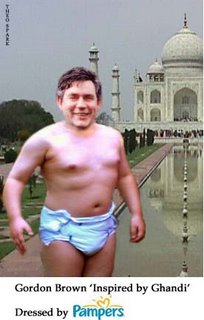 Winston Churchill sums it up:

Every institution, almost, in the world was strained. .. The whole map of Europe has been changed... The modes of thought of men, the whole outlook on affairs, the grouping of parties, all have encountered violent and tremendous changes in the deluge of the world. But as the deluge subsides and the waters fall short, we see the dreary steeples of [ Blair ]and [Brown] emerging once again. The integrity of their quarrel is one of the few institutions that has been unaltered in the cataclysm which has swept the world .

We have two people claiming the governance of the United Kingdom, and claiming it on the international stage; we have threats to our constitution, our economy, our living standards, our home and overseas security, we have the arcane infighting regulated by the Rule Book of the (old) Labour Party, and not by Parliament and the Privy Council.

This is utterly unacceptable.

The Prime Minister must dismiss his Chancellor, or he must resign.

Hmmm. I see that you and Theo have clearly heard the rumours too, Iain.

Is that a rocking horse in the background?

Quite possibly.
Nehru once observed that it needed three rich men to keep Ghandi in his state of poverty.

So who are Gordo's backers?

Nice notion that Gandhi wore a nappy. Any idea why some people think the Celeb Big Brother fiasco is a mirror of Britain's regressive attitude to race?

Brown's conceitful invocation of both Ghandi and Churchill in one interview (on the Today program) brought a chill to my spine. He's clearly already "in the coccoon" and seriously disconnected from reality.

One can't help think that Gordon is now actually quite pleased that Tone is staying on until June. Assuming that Gordon takes over [and that is by no means a certainty] it seems about the earliest time we can start to get troops back from Iraq in meaningful numbers.

However that may show that the 'tide has turned' and he will hope to exploit a honeymoon 'feel-good factor' on the back of that.

You see, it's a bit of fun. Ghandi wore a dhoti, a kind of long loin cloth. Brown tries to ingratiate himself with his hosts by declaring his debt to the old fakir.
Now, to add a twist, Theo puts Gay Gordo in a nappy, because there's a long running joke about....
Oh what's the use? Why don't you piss off, you humourless berk.

Strange, Iain Dale seems to have morphed into Guido Fawkes for this post!

OT: Can the Gooners count on your support on Sunday Iain?

Look at the picture again bebopper "dressed by Pampers" see. Nevermind you didnt get the nappy/rocking horse reference

and people ask why I'm a lesbian...