Ruth Turner: Things Can Only Get Worse 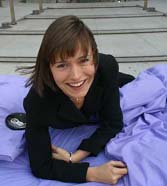 Sometimes it just just isn't your week. maybe your biorhythms are playing up, or maybe your luck is just out. For Ruth Turner it's been a terrible few days. And according to Tribune Magazine it may get even worse, for she stands accused of interfering in Labour Party candidate selections and bending Party rules.

"A formal complaint has been made by a deselected sitting MP [Ian Stewart] who was told he could not have access to party records because it had been decided he was "going to the Lords". Downing Street, senior Blairite party officials and at least one loyalist MP are embroiled in the allegations of irregularities, which point to a concerted effort to oust non-Blairites from standing...Downing Street insiders and senior ministers have confirmed that Ruth Turner, Number 10's director of government relations, co-ordinated party staff, MPs and ministers to assist Ms [Barbara] Keeley. Ms Turner is paid by Labour and is technically a member of the party's staff. As such, she is bound by the party's rules, which state that staff are barred from actively supporting any candidate in internal party elections or selections. Ms Turner was contacted on several occasions but did not return Tribune's calls."

That maybe because she was, er, otherwise engaged with Inspector Knacker, perhaps. It all concerns the selections in Salford where Barbara Keeley beat off Ian Strwart for the nomination and he now has to beat off the challenge from Hazel Blears. The full story is HERE on LabourHome and very entertaining reading it is too.
Posted by Iain Dale at 5:20 pm

Sorry Iain, the link to the Tribune now goes to a lady who hasn't got a house in Chad. ????

Iain, has this got anything to do with a thread on Labourhome a couple of days ago where some comments disappeared? They were discussing this story on the thread IIRC.
I ask because I have read about the MP in question being told he was going to the Lords somewhere else.

He has to beat off a challenge from Hazel Blears?
The very best of luck to him!

Yes the MP in question was told he was going to the Lords (whether he liked it or not).

I look forward to a Newsnight report on this this the next time DC drops a clanger.

I hope she doesn't intend to visit the United States sometime soon. Her recent arrest would appear to put her foul of the visa-waiver scheme...

I have just listened to the 7pm clock news on R4, not even so much of a whisper that there are "unprecedented enquires" into the goings on of our so called governement.

This morning I posted a message on the BBC message board about the Home Office split and they didn't even bother to put it up. OK, i accused them of being bias and that it was all a smoke screen etc etc but it certainly was'nt rude or overtly ranting.
What the hell is going on?

The triblink doesn't lead anywhere near the story - not sure it's even up there at all.

There was a subtle mention of this in some comment or other I made somewhere, probably ref Rochdale selection. On Friday. Lesson - always be sure to blog good bits on own blog as well or instead of elsewhere.

An NEC member was advising everyone who would listen that Stewart was definitely going to win the first selection. Part of the staff cadre even moved to other jobs - bit early given 2-3 years (possibly) to election.

Quite a difference from offering an escape route. Ms Turner, rather preoccupied, this NEC member, regional officers and other king/queen makers and collaters of possibles for lordships don't have the power they think they have in selections.

Mr Stewart has almost the same voting record of late as H Blears. So why would they want to ditch him?

I think the results of any enquiry will find that Barbara Keeley worked her socks off to be retained and Ian and his advisors (e.g. NEC person) took it to be a case of only having to turn up to beat a relatively new face with mixed reviews.

I like Ian despite his not behaving like some dangerous lefty or even as a mild rebel when it comes to either voting or in his public pronouncements or even among small groups of friends. Perhaps his voting patterns have changed a little since the BCE pronounced.

I attended the hearing as our boundary was done in the same two sessions and there was a rather strange but valliant attempt by Salford Cllrs to head change off and also Mr Jacob Berry and other Tories coming up with arrant nonsense, smashing most existing boundaries to bits in the hope of some crumbs falling to them.

Anyway, this is NOT the full story and Stewart had people onside who have also been involved in some very impressive mailing efforts for their slate in NEC elections - though they got stuffed by the left this time.

There is a saying
"I will load the gun you fire the bullets"
This is exactly what holy Tony has done, sat on his sofa and given verbal instructions and left his minions to incriminate themselves via email and paper , lets just hope that when he throws them to the wolves they have the gumption to turn QE.

I see you're mandatory reading for The Westminster Hour now Iain.

Everybody was very aghast at your idea that the home office split story was designed to divert attention from Ruth Turner.

Er, and then they talked about the home office and didn't mention Turner once.

Nick Robinson hasn't accepted any more comments on his "blog", I wonder why?!

I have complained to the BBC about their disgraceful bias. I have made a conscious decision to get rid of my telly when my licence runs out. The Beeb is long past its sell-by date.

Respecting your earlier comments regarding Lord David Puttnam, I wonder how he can now reconcile his position as a non-executive director of Channel 4 with Chairman Luke Johnson's apparent refusal to comment on recent events on Celebrity (sic) Big Brother?

getting rid of your TV will do you no good. A friend of mine who has never had a TV just got a warning letter to get a TV licence....because he has a PC and a mobile phone...
whichever way you cut it..they got you by the short and curlies...

Many of you are simply confused about the apparent silence of the BBC - they are simply obeying the rules and keeping quiet about a legal case that as it can potentially end in a court case needs to be treated as sub-judice and therefore no comments. This is conduct the press (and some of you, including Iain Dale, who I personally find a bit of a loudmouth and also often quite confused) could do with following too.

"Many of you are simply confused about the apparent silence of the BBC - they are simply obeying the rules and keeping quiet about a legal case that as it can potentially end in a court case needs to be treated as sub-judice and therefore no comments."

Compare and contrast to the coverage of the Ipswich serial killer (or not). No worries about due process there!

Let’s take a look at the Tory position on the Saudi corruption investigation - or rather non-investigation:

Police investigations into allegations of corruption in the Al Yamamah arms deal with Saudi Arabia. Labour decides to drop investigation, which is a highly controversial decision. Labour also broke their previous promise to publish the National Audit Office’s early 1990s report into the deal. MI6 has refused to back Labour’s claim that dropping the inquiry was necessary for the fight against terrorism

The Tories have repeatedly stayed silent on the issue despite it having everything going for them: dodgy Labour cover-up, abuse of intelligence services, international crime-fighting body (part of the OECD) criticising them etc. The standard gossip in the Whitehall bubble is that this is because of Wafic Said, who was a middleman on the deal and who, with his wife, is a big donor to the Conservative Party http://www.timesonline.co.uk/article/0,,2087-2104544_1,00.html

If Cameron is really changing the Tory party from its scandal-tainted past, he should come clean on why he’s been silent and should also be calling for the NAO report to be published.

Is this the same Ruth Turner that was at the centre of an "alleged" students union election rigging at Salford Uni some 17yrs ago....???

The same Ruth Turner of Salford University Labour Students. As far as I can recall, there were irregularities in the election procedure, but it didn't amount to vote rigging, just some fun extrodinary general meerings and a scare to Labour Students' dominance of the Students Union.