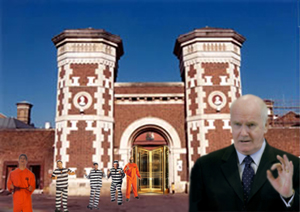 Released on bail: Keith Morris. Pleaded guilty to four sexual activity with under age children. "There are difficulties remanding people in custody at the moment and the only reason I am having any discussion about this is because of those difficulties. If this case had been here last week it would have been over by now and he would be in prison." (Judge Graham Cottle), Exeter Crown Court)
Posted by Iain Dale at 11:16 am

Iain, is Graham Cottle the judge or the paedophile?

They are getting their own back on the Home Office who dared to criticise some sentencing during the past twelve months.

Having worked in the system for 40 years, I am used to letters from Home Secretaries when prison places are falling short. For the record, we have never had enough places - the more you have the more people are sentenced to custody. And also, various Home Secretaries have released people early from their sentence when prison places were unavailable! If you look at prison statistics, the number of people who are not British have contributed to the prison population.

Rod Morgan was advised that his contract was not going to be extended - he went out with a bang and sulking.

Judges are not elected (unfortunately)and should keep out of making political comment. No Home Secretary would ever tell the Judiciary what to do in terms of sentencing and John Reid did not do this. Sentencing Guidelines are determined by Senior Judges and a Board and are continually reviewed or clarified by the Court of Appeal - nothing to do with government (they legislate only).

Sadly, the media (and you Iain) are commenting on cases when you do not have the full facts. If a sentence is lenient, then the CPS refer it to the Appeal Court. The Judge in Wales (whose brother is a politican) did say that there were other factors involved in his sentencing decisions. We would need to have a full summary of his sentencing remarks, a full account of the case, medical/psychiatric/social reports prepared for the Judge and an assessment as to future risk. This is what sentencing is based on - not a Judge acoring points against the Home Office.

Let’s not forget that Gordon Brown deserves to share the blame for the lack of sufficient prison capacity. Since 1997, he has been the most powerful Chancellor in modern history, using control of the purse strings to extend his political power far beyond the proper treasury remit and into all areas of domestic policy. In that time, he has massively increased taxation and government spending, but has failed to ensure that the government has spent appropriately on its most fundamental duty - the protection of the public.

It's enough to give even the staunchest Labour supporter nightmares.

I'm sure Liz (11:50am) is right that we don't have all the facts, but I'm willing to place a sportsman bet that this won't the last little flurry of such incidents. I'm just hope that someone doesn't reoffend after being let off by this 'new approach' to sentencing - we are talking about criminals who target the young and vulnerable, after all.

Is that Levy in the background?

Liz
John Reid did tell the Judiciary in the Sweeney case so the biter bit is a just reward. To pretend that publicing a letter asking courts to take into account sentencing guidelines and particularly in view of the prison situation to look closely at non-custodial alternatives is not direction is sophistry.

The Home Office forecast the situaton and told the Home Sectretary (that it would happen was in the papers a while back) but between them John Reid and Gordon Brown could agree dunding or plan action before the crisis - 9 months ago he could have initiated action as regards upgrading empty armed forces camps, stop the sale of HMPS Weare or put in place its replacement. Why wait till too late?

“If you look at prison statistics, the number of people who are not British have contributed to the prison population.”

And who is responsible for the loss of control over our borders, which has allowed us to become the victims of foreign criminals?

Liz you are right but listen to the excuses from Falconer etc. We NEVER get told the full facts about anything so speculation is a consequence of their spin.

The shameful way this government hides behind the people who cannot answer back; police and judiciary makes the behaviour of the judges totally justified. When they follow instructions of the letter Reid sent (in secret) which you must admit was designed to reduce jailing anyone possible, they get the blame. The government then denythat was its meaning with laughable excuses. Its payback time for all the abuse they have received over the years.

If only everyone did the same to expose the wasters in government we might be rid of them.

This is the reason we need to dump the EU. They have no control over movement across borders so anyone just comes and goes but they never mention this when they talk of a crackdown or deportation.

Iain, I think you'd better take note of 'chrispa's comment, or you could be in a spot of bother...

Why don't they (1) put prisoners up in the corridors or (2) create a waiting list for prisoners.

Does this mean we now have Postcode Sentencing in this country?

When I send a defendant to prison I am required by law to explain the effect of the sentence in ordinary language. If I did this properly I would say, for example: "The sentence is twelve months' imprisonment, but you will almost certainly be out in three months." Like every judge I have spoken to, I HATE this statutory humbug.

Classic statement by the Home Office suggesting that these problems have only come to light because of the amazing reforms which are happening...

is this all a 'dry run' not to imprison a certain A Bliar when the truth catches up with him.....

I think Reid is completly out of his depth. The labour chickens are comming home to roost.

Gordon was the road block.

I bet, if any of us refused to pay council tax, it wouldn't take the government long to find prison places for us.

"Judge Nigel van der Bijl"
Could he be Dutch? - a people notorious for their glue-sniffing habits!

Great piece of spin from the Home Office that 'as we reform the HO, this will bring problems to light' or words to that effect.

Inspired - when the next 'grenade' goes off they can say, 'ah, yes it's because we are working so hard at the reform of the Home Office that we are finding all these hidden problems..'

Brilliant !! Trebles all round..

I do hope Mr Justice Gross isn't in trouble with John Reid.

Well how else do you think he'll keep Tony out of prison?

Check out my blog: Whilst I do not agree this person or anyone else for that matter should get off scot free, I don't think non-violent criminals should go to jail. It costs £45,000 to keep someone in jail, it costs a minimum of £10,000 to give them incapacity benefit and housing allowance. Saving £30,000.

This money could be put to good use, ie for the common good. Suggestion - environmental projects like flood defences, etc.

For example if you watched Colin and Justin on the Estate from Hell, Arden near Glasgow - 10 prisoners kept at home by electronic tagging and satelite tracking could be sent on a painting and landscaping course - their one to three year jail sentence could be conducted at home with a painting and landscaping project for the duration. CRIME DOES NOT PAY would mean no wages bill for the project, thus the project would be costs only - paint, plants, designed artistic railings etc.

The criminal would then be a "benefit" to society, not a "burden". Ancillary issues like employability would provide something on a CV, a criminals family would have a lesser impact as the criminal could stay at home and help with the kids homework. The tax payer would get value for money and environmental projects would get a cash injection to cover costs with free labour and prison overcrowding would be a thing of the past. John Reid would not even have to suggest PRISON SHIPS - what a thought.

How - an email link between the courts, the Council (to run projects) and the Community.

There are endless possibilities for environmental projects:

Make the jobs dirtier, sewage treatment or harder, canal clearing up to your neck in gunge.