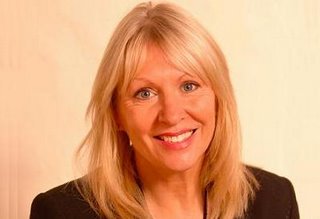 Nadine Dorries is a Tory MP with a sense of humour. She has apparently laboured under the impression for some time that I didn't like her because she defected from David Davis to David Cameron in the leadership. Nothing could be further from the truth. At least she had the balls to tell David to his face, unlike one of her female colleagues whose name will be in my little black book for some to come.

Anyway, the point of this little tale is to point you to Nadine's blog, which is often quite hilarious. Unfortunately she doesn't do permalinks so I can't link directly to the story, but scroll down to January 5th and the Depserate Housewives story. At least no one can ever doubt that Nadine writes the blog herself after reading that...

UPDATE: Nadine has asked me to explain the autism comment on her blog which has caused so much debate in the comments... She says: "To clarify the Autism comments - 27% of autistic children being educated via inclusion within mainstream education are excluded at any one time. Of course, exclusion is not permanent and they are, after a period of time re-admitted. However, of the 27%, 35% are then re excluded. It is an a absolute disgrace and means that children who need education the most, via a policy of inclusion driven by political dogma, receive none."
Posted by Iain Dale at 12:29 am

Not really to do with this thread, however, I feel that the following matter needs raising.

I notice that Gordon and Tony are now extremely worried about the possible break up of the UK. Typically, they are trying to blame it on the Conservative Party, (as usual). The main cause, as I see it for the present state of affairs, is, the Devolution Bill. This Bill was brought in, purely on party political considerations and was designed to Labourise Scotland, Wales and N.Ireland. It was ill thought out and extremely unfair for English voters. I hope it turns round and firmly bites Labour, just where it hurts. It won't be good for the country but at least Labour (mainly Blair and Brown), bloody well deserve everything they get, as a result of this Bill.

Come on Iain forget the WW2W and desperate housewives stories get the thread going on what realist above has raised.

I read all the comments about Mad Nad etc but didn't know she blogged. Read her blog and she seems thoroughly nice, decent and normal so good luck to you. PS you are a babe

We can all see why you like her, and defecting has nothing to do with it.

Doing the housewife thing won't get you any sympathy from her either.

I've always felt uneasy about people with two first names. And with Tories said to have a sense of humour. And with babes.

I was in Mid-Beds the night Nadine was selected and I can tell you she was outstanding. She was so vibrant and passionate about her politics and people took to her instantly. She knocked spots off her male competitors.

I also admired her courage in telling DD face to face.

Little black book, Iain ? Didn't think you were that sort of bloke...

'You're more than a number in my little black book,

You're more than a one-night stand,

And in case you get to thinking that you've been took, [surely taken ?Ed]

You're more than a number, waiting in my little black book'..

I'm not overly convinced that the women who are likely to die, should she get her way and ban abortion, would say that she really has a great 'sense of humour'

Seems to be both a nice person and physicaly attractive.
How the hell did she slip through the net and get into parliament ?
Shame her female brain led her to support Mr potato head rather than the only hope this country has left.

I looked at her blog Ian, and she has an item about women waiting for abortions whose NHS terminations are postponed on financial grounds. These poor women have to wait, with their babies growing in the womb, until some bloody beaurocrat gives the go-ahead for the next batch of operations. Utterly indefensible, in my view.

What the hell is going on with the NHS? What lunatic accounting system attempts to SAVE money by having surgeons and operating theatres standing idle? I just don't get it. And I have a horrible suspicion that the people who are supposed to be running the system don't get it either. It's drifting out of control.

One more thought: Can you envisage any member of the government, or their wives or girl friends having an NHS termination postponed on financial grounds? My guess is, one way or the other, they would find themselves at the head of the queue.

With a name like Nadine, I was determined not to like her, but she is, as they say in the southern US, a pistol.

And she does seem to have courage. First, to tell DD to his face took both nerve and a sense of honour. Second, she seems to be against abortion on demand, as am I, but takes a pragmatic stance, which I think is smart.

what is going wrong with theNHS, is idiot pen pushers thinking they can run the thingas a business, rather than an essential service.
I am bloody glad I trained in the 50's, and retired in 2000 before the crap really took hold.

If Nurse Nadine thought the patient was about to die, then odds-on whe was a cancer patient.
Whole body shingles is another name for chicken pox. Must have been a long time ago if they were treating it with gentian violet. Acyclovir has been around since 1979. http://www.ncbi.nlm.nih.gov/entrez/query.fcgi?db=pubmed&cmd=Retrieve&dopt=AbstractPlus&list_uids=93183&query_hl=3&itool=pubmed_DocSum

"27% of Autistic children are expelled from school every day." That seems like a surprisingly high rate of turnover. Does anyone know what she meant to type?

I'd ask her if she had comments.

If 27% of Autistic children are expelled from school every day there must, by now, be only one autistic child in school.