EXCLUSIVE: It Was Blair Who Called Brown Psychologically Flawed 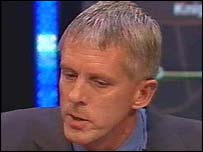 In an interview on 18 Doughty Street's One to One programme last night, Lance Price, former Downing Street spin doctor, has sensationally claimed that Tony Blair himself was the source of quotes describing Gordon Brown as having “psychological flaws”.

Price continues to say he was told by a figure very close to the Chancellor that Alastair Campbell “took the rap” to allow the Prime Minister to escape blame. Below is a transcript of the passage in question...

You can see the clip HERE. The full programme is HERE.
Posted by Iain Dale at 12:58 am

Everyone has psychological flaws. So what? The reasons not to want Brown as PM are the reasons where he agrees with Blair and Price: Iraq, ID cards, PFIs/PPPs, ninety-day detention, &c.

What has happened to the 18 Doughty Street web site? No blogs RSS feeds etc. Can you help.

Howard, a new website will be launched in a few days. It was supposed to go live on Monday but out website builder badly let us down.

Why are you giving a platform to David Lindsay? He is the prophet, apostle and high priest of paleo-Labour, with its Old Labour means to High Tory ends. He is the statist, syndicalist, nationalist and theoconservative voice of the provinces. He is a reactionary Catholic and a Little Briton masquerading as a Socialist. He is a pan-Slavist, a pan-Arabist and a Bolivarian. He is the Peter Hitchens of the pseudo-Left. He is a ghastly throwback to the days when Constituency Labour Parties were run by union closed shops full of Catholic fundamentalists and working-class Tories. At least he isn't actually an MP or a newspaper columnist. Please, please, please stop helping him to become either or both.

Now, if only Lance Price hadn't said, "Now I have no idea whether that’s true" your story would read so much better :-)

Good scoop Iain. I think you have to seperate the planning, purpose and perception.

Did he plan to say this, or was this just an off the cuff comment? Who is he hoping will benefit from this?. Has Lance realised that a Gordon PM will be damaging to the country?

For my penn'th if Gordon is psychologically flawed it's that he runs away from difficult questions, and if the buck stops with him it becomes a political flaw as well.

So... the EXCLUSIVE is that someone with an axe to grind who makes a career out of being a 'former insider' who wasn't there at the time has been told by someone else... (a figure close to the Chancellor? Come offit, Price, if you're going to kiss and tell, then at least have the gonads to actually tell).

Not unlike his book, in fact, reviewed in The Times as being written by a nonentity (not so much the pox doctor as the pox doctor's assistant) and "the secret revelations of Adrian Mole, age 40 and three quarters."

Does David Lindsay have a blog? Sounds fun....

Re Brown the Brave

Given his chicken run to India to avoid inflation figure & the West Lothian question, its good to see al beeb headlining a report of his visit as:

No bias or bigging up Brown there then

Hmm - takes one to know one I guess.

Great story which I'm sure will be followed up, but Price really should be ashamed of himself for the way he is dishing the dirt on his former employers. It's not often I have a good word to say about Alastair Campbell, but at least he knows the meaning of the word loyalty.

What a pirty I STILL can't get any joy with that bloody video link to Doughty street.

Never thought I'd utter this but Bob Piper is spot on. 'Sources close to the Chancellor suspect Blair of spreading nasties'. Piper is also accurate about the nature of Price's book.

Well done Iain, impressive to see that you interviewing technique is getting the goods. Certainly a reason to watch.

As far as the website goes I feel for you. Web designers can be such a pain in the arse when it comes to deadlines.

I was unable to watch the programme live because of my shoddy broadband connection but nice work Iain.

Can I be your sock-puppet?

John Hutton was right: " He would make a f***ing awful Prime Minister in my opinion"

Oh, and I am indeed available to write for newspapers, magazines, &c (radio/television as well, I might add) - davidaslindsay@hotmail.com, from which a phone number is also available to serious enquirers. I wouldn't quite phrase my views as Anonymous 3:00 (Three o'clock in the morning!) does, but I know what he means, and he's basically right, more or less. But I have soem very original takes on each and every aspect of waht he says...