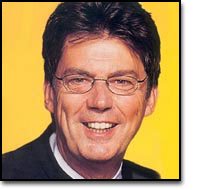 Mike Read used to present the Radio 1 Breakfast Show. As a seventeen year old, I remember being woken up at 7.30pm one morning by my mother to tell me Mike Read was on the phone and did I want to play Beat the Jock. I had to think of a pop question for Mike Read, who was considered to be a walking pop encyclopedia, and if I won I would get a badge saying I BEAT THE JOCK. Needless to say he answered my question correctly but I still got a badge nevertheless.

Now the point of this anecdote, dear reader, is to bring you the news that Mike Read is, according to Richard Kay in the Mail, putting himself forward as Conservative Candidate for Mayor of London. Kay reports that Read has been interviewed by Francis Maude and is on a shortlist of four people to contest the mayoralty. I'm not sure this can be terribly accurate as so far as I know there is no shortlist in existence. Read told the Mail...

"I would be delighted to take on Ken Livingstone. I would get rid of the bendy buses and change the rates for the congestion charge area. All the cabbies know me and that's an advantage."
Posted by Iain Dale at 11:16 am

The best Tory candidate for London Mayor would be David Cameron.

Peter Hitchens, (both of them) would be the best by a country mile.

A joint mayoralty of morality.

How about getting rid of the blasrted Congestion Tax?

this guy knows nothing about running for a bus, let alone running london.

Why do you want to get rid of Ken anyway ? He's doing a great job - he puts a few noses out of joint, but that's his job. And he'll stand up to those bullying, sub-human sub literate vermin at the Daily Mail.

He got us the Olympics didn't he ?
Now let's stop complaining, because if anyone can, Ken can.

What does Ken Livingstone actually do?

A great pity that Nick Ferrari pulled out.

What is it with London Tories and local radio DJs? Has the Ferrari incident taught you nothing and didn't Read achieve fame campaigning to ban Frankie Goes to Hollywood. That effort lifted them from thirty-something in the charts to number one for weeks and made 'Frankie says...' T-shirts the fashion must have of 1984.

I'm sure any campaigning he does on behalf of the Tories will be equally successful.

No No No - he's awful. One of those pompous Smashing & Nicey types.

The Tories would never live it down - though by all accounts Read is deaf to any form of criticism or sense of how ridiculous he appears, though this might be a useful quality for a Mayor.

Now I thought for a minute Mike Reid would run...around (haw haw).

Mike Reid is so naff I can't believe someone as nous as Dave Cameron would let him ruin all his good work.

Mike will certainly do a lot for charidee - but won't like to talk about it.

If he starts his campaign by pledging to have the Olympics moved to Paris he's onto a winner.

By the way: I 'ad that Mike Read in the back of me cab once.

Mike Read's support for friends who have hit a rough patch is notable - remember Channel Five's "The Curse of Noel Edmonds"?

Er...first feelings are that it is ok to be a DJ and a Tory.

Second: he has a high profile and therefore has a sort of advantage.

Third:it will be the first time I hear his politics.

Fourth: He will be therefore,be prone to exageration and find the desire to hunt the headline, too much to resist.

Fifth:That headline will destroy him, as it does others.

Sixth: The Tories aren't serious anymore about securing London for their supporters.

Seventh:Nationally, the Tories will suffer due to their mishandling of the London quest.

Eighth: Get serious and only allow DJs with pedigree anywhere near a manifesto.

This is rubbish isn’t it . Everyone seems to know its going to be Nic Boles who I have little time for but would be preferable to Mike Reid .

I have an application in , only demi semi serious , but I go the backing of the local Party . I was wondering if they were going to bother to reply . If you phone the Conservative office you will, discover, as ever it is a shambles and nothing that was supposed to happen is happening .
Francis Maude, if he is actually responsible, is showing all charismatic energy of a garage forecourt waving cardboard cut out He complains that activist’s don1t do enough. We do not he says arrive at by elections with caravans. That is because we are all working. Conservative Demos must be on Sunday allowing for family time and lunch

Does anyone know what the schedule is . I `ll put my plan for London up if ( as does not seem likely) anyone wanted a peek . Anyway the bottom line is that in the City where the working family is being driven to extinction we are going to get an out gay Etotion lifetime Policy wonk who writes perfumed missives to David Cameron in the Telegraph on a level most of us discarded about the age of six . I love all Conservatives but my love for some is becoming distant and cold .

I think the job should go to Dick Wittington as Red Ken is making such a pantomime of it!

He would clear all the cars off the street so that his trucking friends could have the roads to themselves.

He got us the Olympics didn't he ?

Excuse me, but aren't we talking about the guy who went on "I'm a Celebrity - Get Me Out of Here?" and got voted off in the first round because he was so boring?
I'd prefer Carol Thatcher - at least people vote for her.
Or what about Nigel Havers? Tory establishment dad, hates Ken Livingstone (nominated him for Room 101)and dishier and smoother than Cameron.

“Beat the Jock”; you might have failed to do so Ian but Red Ken wouldn’t! Surely our party can find a more suitable candidate then him

Read would do well. If he knows all the names of the Bay City Rollers, he could easily reorganise London for the 22nd Century.

Didn't Mike Read do the bit at the start of VHS tapes in the old days, "This feature is rated 15, which means it may include moderate violence and sexual swear words..."

Classic - very often the best bot of the tape.

It is odd that no serious contender is coming forward. Ken is there for the beating and it is a bunch of nobodies and lunatics.

I'm not familiar with two of the names put up here. Nic Boles amd Nick Ferrari but I'm informed that one of these is also a DJ in the London area.

Look! stop taking everyone in this country as a complete and utter bunch of idiots.

Tories are just becoming a second rate party with no obvious desire to lead anything.

Occassionaly you let George Osborne out of his cage for a few one liners:
"you are responsible for new Labour".
"Labour is only new, once".

My advice is that if you can't say anything reasonable or responsible, then just be quiet and let someone else do the right thing. You are therefore asked to do the decent thing.

My informant tells me that Ferrari is the overweight blonde DJ who says daft things for excitable people.

I'm pretty sure that was Simon Bates.

(this fact brought to you by the memory cells where the capital of Uzbekhistan should be).