Tony Blair: Not a SHRED of Evidence... 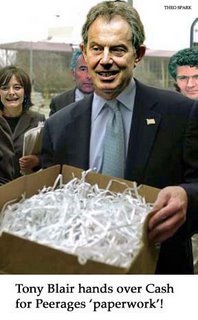 Thanks to TheoSpark
Posted by Iain Dale at 3:58 pm

Fantastic - he can line his cell with this lot.

V good! Who's that grinning ape in the background? Oops! It's Elena Ceaucescu!

That's TB's career in that box.

There is no Honour amongst thieves. You would think that Tony Blair and Lord Levy could at least get their stories straight before the police knock on the door. But, I suspect that Tony Blair will somehow let someone else take the rap.

The truth will out. Particularly when Levy starts squealing to save his skin.

Its his reputation and career in the box. Epitaph "He meant well but hubris and vanity cut him down in his prime."

I seem to remember a tale from way back in the late 70's.

Back then there was a bit of a kerfuffle in Tehran and the US Embassy got took over. Before the mobs stormed the gates the staffers and the CIA shredded every bit of paper they had.

But did this deter the Persians? Not a chuff, instead they rounded up every member of the Tehran Jigsaw Fanciers who spent months sticking all the paperwork back together.

Anyone know if Yates has been googling for the URL of the Westminster Jigsaw Puzzle Club?

Is it time to start referring to Yates of the Yard as "Banana"? After all, a banana is bent and yellow.

And three months on - and STILL no-one is charged, arrested etc.

Can't help wondering if Yates is waiting for the PM to depart Number 10 before clapping him irons.

The whole business is crazy, misguided and wrong.

I have my own thoughts on the relationship betewwen the police, press and government. Go here - yes, the Keep Tony Blair blog is still live - and look around!