I'll Have a 'P', Please Michael 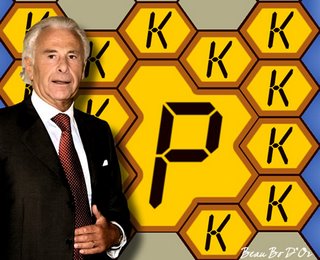 Hat-tip Beau Bo D'Or
Martin Bright is the political editor of the New Statesman and has been one of the journalists who has been pushing the barriers of the Cash for Peerages issue. On his BLOG he has just posted this...

I was very interested to read in the The Telegraph that the bio-tech entrepreneur Sir Christopher Evans was alleged to have been offered "a K or a Big P" by Lord Levy. This is not the first time I have heard about this very idiosyncratic use of code by Lord Levy to describe knighthoods and peerages. A prominent Labour peer with impeccable media contacts once told me that he had heard that Levy used the letter "K" to mean a knighthood. I have also spoken to one of his tennis partners who told me that he once heard Levy tell a potential Labour donor that a substantial gift "had to be worth a K" (although, of course, that doesn't mean Levy was offering him one!). Unfortunately, when ths individual was interviewed for the Channel 4 documentary I presented on the subject he had a momentary memory lapse. Levy provokes fierce loyalty in his friends, who tell me he is incapable of doing anything illegal. I do hope they are right.

I am sure Mr Bright will be passing on the details to Inspector Knacker.
Posted by Iain Dale at 3:14 pm

Perhaps he could have a sponsorship deal with 'KP Nuts'....

If he wasn't doing anything wrong, why talk about it in code...a pretty rubbish code at that.

Oh dear, this has been on Guido all morning!

Another nail in the coffin on the cash for peerages issue.

That said you have to wonder if the pottential cover up will do for them more than anything else.

I think "incapable" is the right word.

It never occurs to some people to be dishonest. It is never an issue. For others it is the first resort.

It doesn't mean he is going to sing like a canary though.

Who's hat-tipping who then? You or Guido?

K,P, whatever - the price/cost was certainly not peanuts!

I think the 'code' is in quite common use in certain circles. Alan Clark banged on about his elusive 'K' in the Diaries.

Key and Prison springs to mind. I can't for the life of me think why.

and you are also here JHL?

He has a great deal to say about freedom and rights, and wishes Nina Burton-Harris would move on. "She thinks I'm free," he says. "My life sentence goes on until the day I die. But she is filled with assumptions about my life being all freedom and jollies. In a sense, your life sentence only begins the day you get out."

"But do you want to be forgiven by her?"

"Honestly, I don't give two fucks," he says.

Don't give two fucks he says, well that sums Hirst up nicely.
Hirst nobody in the real/virtual world wants anything to do with you (even your own mother) stop polluting this place with your presence.
You live alone in a shithole with a dog, surrounded by tat as that is where you belong.
Ianin how would you feel if that was your mother he hit over the head with an axe?

John Sandell mentioned Alan Clark. He fascinates me. A bastard AND a shit, but somebody who you trusted because of it. A true WYSIWYG bloke..somehow the name Clark, with or without an E, seems to be synonymous with honesty and integrity.

"Levy provokes fierce loyalty in his friends, who tell me he is incapable of doing anything illegal."

Didn't the friends of Ronnie and Reggie Kray have much the same attitude?

"peter hitchins": Are you stalking me because I am famous and all you have got to show is a nick which you have impersonated from somebody else? The comment is mine, so what, what are you going to do about it sue me for the truth? If you don't like the comment, tough shit. On the contrary, in both worlds, there are those who do want to know me and respect me. The only pollution going on here is from yourself. I live alone, in a pleasant little house, which my criminal barrister landlord and myself do not think is a shit hole. I don't live in a scrapyard where you might find tat. The dog is a good guard dog, so I would advise you to keep your distance. I don't know what kind of reaction you are trying to provoke me into, but I believe that my conduct is within moderation. Your's however, I believe is not. Very shortly you will be receiving a visit from the police. And of course I have already told you that you will be receiving my legal response at private law in due course. Enjoy your Christmas, and don't choke on the KP nuts!

jhl you are a shameless self regarding bore with a personality disorder. famous - are you mad? do not believe that the modest publicity you have received validates your current or previous activities. a long period of silent reflection is advised. but no that would be too painful.

I would advise you to keep your distance. I don't know what kind of reaction you are trying to provoke me into, but I believe that my conduct is within moderation. Your's however, I believe is not. Very shortly you will be receiving a visit from the police. And of course I have already told you that you will be receiving my legal response at private law in due course. Enjoy your Christmas, and don't choke on the KP nuts!
hirst I do no more than point out to others that in 1979 you hacked an elderly lady to death, I do not do this for pleasure merely to alert others to the kind of person you are, after all we all know how certain kinds of folk use the internet to groom and find prey.
I think everybody who interacts with you should know that you hacked a 63 year old woman to death and couldn't give "two fucks " about it (+:
You and whoever are welcome to come after me through the courts as i say i am not harassing you just giving others fair warning of the kind of person that you are.
merry christmas !
you murdering piece of shit (+:

JHL
When you and your gimp lawyer toddle along to Hull nick to complain about me, please take a camera , I want to see the look on the faces of the coppers when you start bitching about being outed as an axe murderer

Jailhouselaywer and Peter Hitchens, That's ENOUGH. No more comments will be allowed through.

Thanks Iain, a merciful relief...