Blair: What a Difference 23 Years Makes 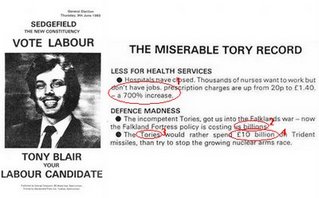 How did Alfred E Neuman get to be Prime Minister of the UK?

My first thought was how could the good citizens of Sedgefield still vote for such a twat after such an about face. But then I remembered how well the bereaved father of the fallen in Iraq (who's name sadly eludes me) had done there in 2005 and I felt warmer to that electorate.
We went to war over the Falklands because our sovereign land had been invaded. We went to war with Iraq purely for regime change, and Blair lied to Parliament and the nation to justify it.
I sincerely hope that Sedgefield can not vote Blair in again as he will be in jail!

I notice that you havnt written any info on this blog Iain, but thats right, because this really does speak for itself.

Nothing new here then...

Now could someone please explain why it's a good idea for the Tory party to have leader who seems to be doing his best to be Blair Mark II?

Lol. Is there an equivalent Cameron flip-flop card?

How about voting against the 2001 sexual discrimination (parliamentary candidates) bill which sought to introduce positive discrimination just to use it as the foundation of his 'modernisation' of the Tories?

If the vote had gone Cameron's way, his A-list would have been illegal.

so at least we should be grateful of one thign - he was never Chancellor, or imagine how much more fucked we would probably be with his numbers......

He wrote things for each of the numbers too.

It's been a while since I did maths so someone tell me this is right!

And if it's wrong then please spare me the sarky remarks over the state of Antipodean education.

The only political constituency to get it right was Beaconsfield, which in the Parliamentary by-election of 1982, and when I was a Vice Chairman of their Conservative Association, delivered Blair with his only electoral defeat to date.

I'd like to do him the courtesy again. And with your indulgence, Iain, and a little self-promotion (heaven forbid!), I will try.

The only thing about this past week that has surprised me is that you, Iain, and other good Tory warriors, are not asking if Blair's halting of the BAe investigation flowed from the fact that BAe largesse may have been flowing into New Labour's coffers - along with the peerage compensation.

The unwelcome guest during this whole past week has been the poison of arms corruption in the body politic in Great Britain.

For the real story on that, resulting from my own 18 year investigation (which began with a mysterious death in the same Beaconsfield constituency, and hopefully will end with New Labour's downfall), go to www.lulu.com/content/384105

Thank you Iain for your continuing savvy. A Merry Christmas to all of us political bloggers!

One hates to say it, but that picture is vaguely reminiscent of a certain Cameron snap that got a councillor from the north in a spot of bother last week...

Dear Lord! I know the country had barely left the worst decade on record behind back then, but how could anyone vote for that muppet?

Verily the good folk of Sedgefield will vte for anything so long as it wears a red rosette.

The picture, with the addition of the right feathered hat, could almost be Guido .......

Is Blair still a card carrying member of CND?

It is one of my pet hates in journalism, this innumeracy of Blair's and bufc's. Blair made the same error as the newsreaders and commentators who say "3 times more" - i.e. 4 times as many - when they really mean 3 times as many. Even worse is the "10 times fewer". This of course means the usually impossible -90%, when they actually mean 1/10th as many.

Such imprecision of expression Blair was showing then is common now in people who are paid to inform us, and it makes what they are actually trying to say ambigous. Had Blair not given the figures as well, he would have still been lying (we now see not a new thing for oujr TB) but we would not have known.

Yikes that picture is scary. Someone must have told him to smile until it hurt.

It's James Brown ! Living in America...Knockout !!!