Winning it for the 'Gipper' 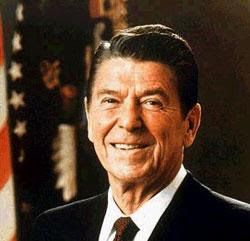 There is a ghost at these Republican primaries and its name is Ronald Reagan. Each of the four remaining candidates in the race is claiming the Reagan legacy for himself. They all reckon that they - and only they - are the true inheritors. They're all wrong. With the possible exception of John McCain, they're beyond comparison. Mitt Romney is a conviction free zone. Huckabee's religious fundamentalism would have Reagan turning in his grave. Ron Paul's idealism is laudable, yet he fails to match it with a Reagan-esque ability to be pragmatic. But there's no doubt about it - if you mention the words Ronald and Reagan in the same sentence you're guaranteed a huge cheer.

Perhaps it will one day be the same in Britain for Margaret Thatcher. Such a shame politicians have to die first for their legacy to be truly appreciated.
Posted by Iain Dale at 3:52 am

Do I sense you're softening towards McCain now? I actually do think that he is by far the better option. As for Obama, well any Republican is better than a non-Republican.

Good grief, what a sweeping statement. Reagan had be lead kicking and screaming to support us over the Falklands war. If he had not support us, we would have lost, and Mrs T would have been a footnote in history.

Recently you have highlighted what is wrong with a section of the Tory Party. Always looking back, never forwards. The 80's are over. We live in the 21st century now. The world is a different place. Move on!

Howard, You seem to delight in attributing thoughts to me which aren;t actually contained in what I have written.

I was reporting what's happening in this campaign, not making a value judgement on it.

I then said that it's a pity you have to die to be appreciated. That's got nothing to do with wishing to return to the 1980s.

God knows if I get asked again, by American acquaintances, why I have a problem with Clinton when she's 'just like Margaret Thatcher'...

There are some important differences between the two that will determine their legacy. That tends to be dictated to a great extent by the last things you're remembered for. Thatcher's problems in that regard is that her triumphs occurred fairly early in her period in office (Falklands, conflicts with the unions), and that her greatest errors of judgment manifested themselves at the end of her tenure (poll tax) and after she'd resigned (hugging the great evil South American dictator). Reagan's stature is also enhanced enormously by the collapse of the communist bloc not long after the end of his presidency

I wouldn't be at all surprised if the Thatcher coalition fell apart in just the same way as the Reagan coalition.

I think Maggie still commands a lot of respect, thankfully.

Reagan and Thatcher will be admired for many years, even if their policies would never be accepted in the modern political era.

How is the G in Gipper pronounced?

"The United States supported and in many cases engendered every right-wing military dictatorship in the world after the end of the Second World War" as an eminent Nobel Prize winner so rightly said. And Reagan was in the forefront of this. The man should have been impeached for the lies he told about Nicaragua and for the illegal military and financial support he personally authorised for the Contras.

The “Gipper” tag is a sentimental emetic and the retrospective sanctification of this dreadful President impoverished cant. Many of the conventional wisdoms in country club America revolve around the myth that Reagan’s administrations somehow took America and the world forward. The reality is the opposite and it is to be lamented that every political candidate (even Obama, who should have known better or have been better advised) seems obliged to worship at the polluted Reagan shrine.

'As for Obama, well any Republican is better than a non-Republican.'

Given the current state of the republican party I really have to disgree with you over that. There are some sections of the GOP which is distinctly distastful...

Dying is always a good way to increase your popularity. Ask Jesus.

"Perhaps it will one day be the same in Britain for Margaret Thatcher. Such a shame politicians have to die first for their legacy to be truly appreciated."

That was not a simple coincidence despite what lefties say e.g. Denis Healy in his enormously snotty book.

Mrs T., the Pope & Reagan have quite a story to tell.

Reagan wasn't perfect but he had that certain something. People liked him and everything about him. This may seem trite but this is what decides elections.

McCain, for all his talk about cutting spending, is a big-government type. Alas, I'll never be proven correct on this because McCain is going to get trounced by Obama or Hillary.

"Always looking back, never forwards. The 80's are over. We live in the 21st century now. The world is a different place."
Idiot.

Reagan wasn't perfect but he had that certain something. People liked him ..

Exactly and don't forget the dreary Jimmy Carter was the alternative. No brainer.