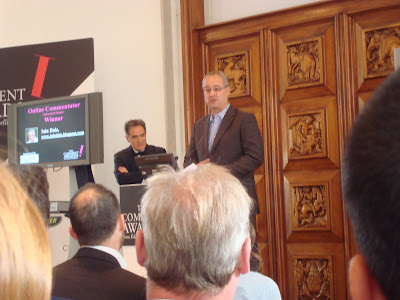 This morning I won an award. I've never won one before, so I'm feeling rather euphoric. It was the EI Online Commentator of the Year. I was shortlisted with Guido Fawkes and Chris Dillow of Stumbling & Mumbling. The event was entertainingly compered by style guru Peter York. Other award winners were...

Full details of the event are HERE. 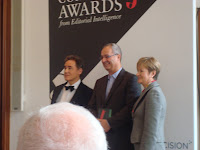 I made a very short speech in which I very ungraciously failed to thank anyone, because I wanted to use my time to draw attention to the way in which online commentators have shown their worth over the Guardian gagging case. So let me thank a few people here instead.

First of all, thanks to my readers for sticking with me even on days when I am not on top form. Thanks also to everyone in the political and media world who give me so much to write about. And special thanks to those who help me out on the technical side when I need it - Mike, Russell, Liam, Jag.

And thanks to all those who put up with me blogging when I really should be doing something else. Especially John. I'm the only one who really knows what he has to put up with - although many of you can guess.

I am now off to gaze adoringly at the lovely slab of glass EI presented me with.
Posted by Iain Dale at 11:53 am

Congratulations, Iain. You are one of the most measured and thoughtful bloggers around. You deserve the award.

Lets hope you can follow this up with a result at Bracknell.

No offence, Iain, but Guido single-handedly brought down a cabinet minister along with losing the Prime Minister's spokesman his job and exposing a smear operation by the party of government.

What have you done?

Turnout surpressed by postal strike and bonfire night. Middle class families will have a dilemma do they go to yhe polling station or have a bonfire!

Opposition parties limited in terms of getting leaflets out due to postal strike!

The Glasgow by-election writ has still not been issued by parliament. The date was announced but nothing has formally been done!

The spin operation over the last week has been pretty interesting to say the least in trying to bury bad news!

The first of many I hope!

Congratulations Iain, well deserved and I'm pleased for you

Well done, Iain. Just got Bracknell to sort out now and you can retire from blogging as a champion!

Johann Hari won an award?!? The man's beyond parody. Even Polly Toynbee has more consistency. Oh, well done by the way but really? Johann Hari? Unbeeeelievable.

How about those who put up with you doing something else when you should be blogging ?

Congratulations Iain - and Perry, Guido does what he does fantastically well, but this blog always feels like a political-minded good friend chatting to you. That's why I always log on to ID's Diary before reading anyone else, and is probably why we all spring to Iain's defence when necessary!

Hardly an awards ceremony without Bono?

But what about Littlejohn - the award for the best polemicist. I am so pleased that I used to play Scrabble.

You have Olympian qualities Iain.

For your many female fans, who collect souvenir scrapbooks, full of all your news and pictures, may I suggest you consider investing a few quid in an "Iain Dale Personal News and Portrait Photographer" ...

Otherwise, your problem seems to be the award-winner's photos are marred by too much "foreground interest" - stuff irrelevant to your portrait moment

Front bottoms of the pix you published seem to be stuffed with those bald-spotted heads of old codgers, sat in the front-row seats, who think they're the VIPs

Yet, it was YOU, you won the award, silly, not the BaldHeads who turn out for any bash where free refreshments are promised

So, better photography, ideal solution. Your readership may be less "visually-illiterate" than you think. They deserve better photo-coverage, not a couple of hasty snapshots of the award winner, Mr Iain Dale, from some flunkie sat too many rows back in the clapping audience