An Internet Election in Iraq? 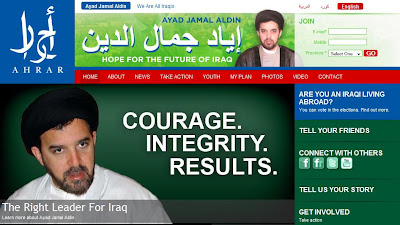 Proof that the internet is having a major impact on elections all over the world can be seen in this website of a newly announced candidate for the Iraqi presidential elections next year. It's the sort of site which you would normally see in a US election. The press release announcing the site says...

Ayad Jamal Aldin is a young, Shia cleric, best known for his consistent campaigning for a new, secular Iraq. He first rose to prominence at the Nasiriyah conference in March 2003, shortly before the fall of Saddam, where he called for a state free of religion, the turban and other theological symbols. In 2005, he was elected as one of the 25 MPs on the Iraqi National List, but withdrew in 2009 after becoming disenchanted with Iyad Allawi’s overtures to Iran. He wants complete independence from Iranian interference in Iraq. He now leads the Ahrar party for the 2010 election to the Council of Representatives, to clean up corruption and create a strong, secure and liberated Iraq for the future.

Is this proof that democracy is starting to embed itself into Iraq's political culture? I have no idea how likely Ayad Jamal Aldin is to win, but I think it is fascinating to see how Iraqi politicians are now openly using western new media campaigning methods.
Posted by Iain Dale at 5:30 pm

Mohamed Wants Me for a Sunbeam said...

How very un-Islamic! He'll probably get his nadgers chopped off and be given a damn good flogging. Serves the bounder right.

I think the guy sounds great, but also that there is a vast difference between democracy and an Elective Theocracy. This guy is still a Shia cleric, you will note.

As far as the permanent governance of Iraq is concerned, though, we won't see anything for sure until all the non-Iraqis are out of the way and they can finally decide for themselves whether to go for the civil war or not.

If Kurdistan declares independence, keep an eye on Turkey, too...

Let's hope the organisers are better than:-

1. Alcohol Focus Scotland, whose current vote has 95% AGAINST minimum pricing.

2. Science Museum's "Prove It" where Climate Change sceptics (realists?) are actually prompted to reconsider, after they've voted the "wrong" way. What a great idea at a General Election!!

Well if he carries on writing his website in English 'not likely at all' is the answer.

Is he the only one, or are there others using the net?

My son told me one of the candidates for Kazakhstan's Pres campaigned on the net and was v modern in his outlook.

Kazakhstan has equal numbers of muslims and christians, a unique society.

Good campaign material. I'd vote for him.