Last night's radio show was a blast. Loads of calls and all of them insightful and interesting. The highlight was a call from someone calling himself Lord Elvis, who proceeded to sing a Chas & Dave song in the voice of Elvis with lyrics about Nadine. You had to be there. We also had two eyewitness reports from the Andrew MacKay public meeting in Bracknell. One of them was LibDem blogger Mark Reckons who gives his own account of the meeting HERE.

I'm told that we broke the record for the number of live listeners at any one time on the station which isn't bad for only the second programme.

I'll be back next Friday with another show from 11pm-1am, but the following Friday will be a bit different. We'll be broadcasting all the way through from 9am to 4pm covering the local election results. Hopi Sen will be co-presenting. I've had a tremednous response from readers to provide information and analysis on the day. If you can help, do drop me an email. We'll also be doing a European elections programme on Sunday 7 June fro 6pm to midnight. 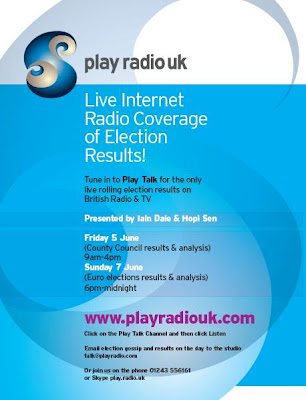 Email ThisBlogThis!Share to TwitterShare to FacebookShare to Pinterest
Labels: PlayRadioUK

Great to hear audience figures are so high.
Curious how this internet thing works, eh?

great show Iain listened last night. Just wondering if there is any chance of a podcast/xml feed being made available for automatic downloading?

You can always download from here every Saturday, gets uploaded around lunchtime!!

Other than that, very enjoyable show again.

Where's the Daley Dozen? Has it been scrapped.

Is there a producer behind the glass or are you presenting and desk driving at the same time?

Peter Mc. There's no producer. I do it all myself. As you will hear when you get to the bit where I didn't know how to switch the adverts off!

Gordon, At the moment it has to be 11-1 because they are using the studio to do a live show for Ice rinks (!) until 10.30. However, when their new studios open, the plan is to do it from 9 till midnight. But that won't be for a bit yet, I am afraid. I want to do it earlier as the studios are in Arundel and at the moment I don't get home until 2.30am!

Good show - Skype may be worth dropping as the call quality/user issues made crap listening.

Well done. Phone-ins are tricky as I know from personal experience - will tune in next time.

Oh, yes — the eternally-repeating adverts! That was strange…

I'd guessed what might have happened, but I had an image of a Cpl Jones "Permission to panic, Captain Mainwaring!" moment at the time!

Afraid live version broadcasts way beyond my bedtime but I loved the podcast. I'd be delighted to see you elected to a safe seat in an autumn GE.

Great show, Iain! I have to tell you, when that Lord Elvis character started singing his song about Nadine Dorries, I seriously began to wonder whether the water around here had been spiked with LSD. The Eternal Adbreak was also very funny, particularly hen the "Part of the Something Corporation" seemed to be playing at the end of just about every ad, making it sound as though the entire world had just been taken over by some shadowy multinational I'd never heard of.

Hi Iain,
I was one of the callers last night - very nice to talk to you.
On a technical issue - did any other callers have difficulty hearing you down the line? You were almost inaudible, which made the convo quite difficult - I wasn't sure if I was talking across you some of the time.
Any chance of turning up the volume for callers?

Ian, Yes, I am told it is being dealt with. Thanks for phoning in!

Thangyaverymuch Mr Dale. Wonderful show. Good job you've got a recording because I don't remember much about it.

Just listened to the podcast - another good show. Agree with Plato that Skype is a bit of a #techfail, though the unintentional comedy of the time-delayed conversation never fails to amuse.