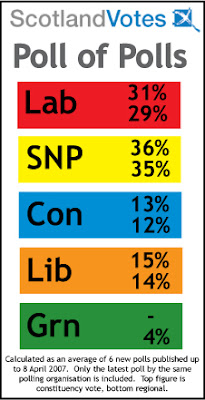 The Scottish office of PR consultants Weber Shandwick have released a 'Poll of Polls', which shows that the SNP would emerge from the Scottish parliament elections as the largest party with 51 seats, some 7 more than Labour.

This would result in 44 Labour MSPs, 51 SNP, 14 Conservatives and 18 Liberal Democrats. But the interesting thing is that the current LIB/LAB coalition would only be three seats short of a majority.

Weber Shandwick director of public affairs Moray Macdonald said: “If this poll mirrors the actual result on election day then the only thing that will be clear is that we may not know who will be in power for quite some time.

"There is a real possibility that although the SNP may have a larger share of the popular vote, and maybe even more MSPs, that Labour and the Lib Dems could just scrape enough MSPs to continue in coalition. If the SNP and Liberals can’t agree on a referendum on independence then this outcome is a very real possibility."Under this result the smaller parties would fair badly with only one Green and one SSP member returned. Weber Shandwick Public calculated the poll using an average of the most recent opinion polls by six different polling organisations.

By any stretch of the imagination, the only Party to emerge from this Poll with any credit is the SNP, but they will be horrified by the narrowness of the seat allocation. The Conservative showing is very disappointing, although I suspect that it underestimates Conservative support to an extent. There are no doubt some very shy Tories in Scotland!
Posted by Iain Dale at 3:54 pm

51 SNP & 18 Lib Dems would give them 69 seats - a small majority out of 129 seats. They do this on 49% of the vote mainly because the Greens & Scottish Socialists are getting to small a share of the vote & being eliminated.

This poll also shows very few independents & I would bet there will be more than that though I would very much like to see the g
Greens stuffed.

I still think they most likely probability will be a that a 2 party coalition will not quite make it & are most likely to have an SNP minority government & a very interesting future. I certainly hope so.

Neil.. wishful thinking but the Greens are likely to be here to stay.. although the same can't be said about the independents, most of whom were elected on party tickets (and then thrown out) or are standing down.

As they say, it's all very interesting...

Are there any scottish polls where the Conservatives aren't in fourth place?

Iain, I think you are right, there are indeed some shy Tories in Scotland! However, some would be less shy if the Scottish Tories offered the electorate some solid right wing policies to get their teeth into. I bet you that very few of the current Scottish electorate could tell us one big idea that the Scottish Tories stand for. Are they still for freeing schools from local authority control? Are they still for radical reform of local Government taxation? Are they for big reductions in the size of Government and, consequently, of taxataion? Very few people would be sure of the answers to any of these, and many Tories would probably be unhappy with the answers. If the party can't design and communicate radical ideas that create a huge gulf of clear blue water between them and others, I'm afraid it deserves to languish in last place. All of this is very depressing for Scottish Tories.

Doesn't this all demonstrate again the evils of any electoral system that isn't FPTP?

Oh, wow, such brilliant news. It's enough to make you burst into song.

#All the chapel bells are ringing,
In those little Scottish towns,
And the song that they are singing,
Says GOOD RIDDANCE Jimmy Brown!#

Does this poll of polls include the rogue one sponsored by The Herald in Scotland and carried out by mrcuk which is not a member of the the British Polling Council (title?). No explanation from The Herald on why they used this company who have no experience of political polling.
Unbelievably this poll showed Labour in the lead so if included would skew the overall "average".

Oh dear - your chum Guy Fawkes drops in a reference to "cluster- headaches". And?

Tactical voting could change things around very quickly. Also a vote for the LIB DEMS is no different to a Labour vote, therefore, I think that Labour and the Conservatives will do very badly and the SNP will have a very good day.

Proportional representation, in all and any of its forms is an avoidance of democratic expression. Its arguments are put forward always as increasing fairness in representation but that's only true if there is a committment to centralised, party- dominated politics.

The straightforward relationship between a single constituency MP and first past the post voting is clear to us all and the MP remains answerable to us as well as to party. And with some resistance to party discipline, despite the example of supine performance by the Labour party in the last 10 years.

I look at the Scottish elections and I know that if Brown and his faction of statists are foisted upon us (as they are so desperately seeking to do in the face of any kind of propriety ) we will never get them out in any subsequent general election because they'll change the rules for good.

The list here come to 127 from the main parties leaving 2 left over.

The front runners would be Tommy Sheriden of people's Front of Judea & 1 Green. I think 1 Green is optimistic - there may well be 2. Also I can't see Margo MacDonald (was SNP but when they didn't select her she stood & won in her own right) being ousted. There is also the 1 member for the Senior citizen's party & an anti-hospital closurist.

Clearly national sampling like this does not fully reflect local issues & thus small parties. I think it will take 3 parties to form a majority.