Book Review: Cameron: The Rise of the New Conservative 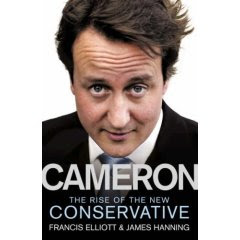 Last night I finished reading the new biography CAMERON: THE RISE OF THE NEW CONSERVATIVE by Francis Elliott and James Hanning. This is not a book to challenge the reader, but it was never meant to be. Its sole purpose was to delve into the character of David Cameron and enable the reader to find out a little more about a politician who could be the country's next Prime Minister. To eek out 300 pages on someone who has only recently turned forty is an achievement in itself.

This book is best in the chapters detailing Cameron's family background, childhood and marriage. In particular the authors deserve praise for the way they handled the chapter on the Camerons's disabled son Ivan. They write about him in a way which is empathetic and at at times harrowing.

One minor complaint is the chapter on the leadership election, which I didn't feel told us anything that we didn't know before. It should have been the definitive account, but fell some way short. Perhaps I was too close to it to be a good judge, but it could have been rather more colourful than it turned out to be. Similarly I didn't feel the final chapter left us much the wiser about what a Cameron government would do or how it would operate. Perhaps that is being left for the inevitable paperback!

Elliott and Hanning have done what their publishers no doubt wanted. they have written a book aimed at a Daily Mail reader who quite likes what they see of Cameron but wants to know a bit more about him and his character. It is a book which is not really aimed at a political audience, but at the general reader. And as such it ought to sell very well indeed.
Posted by Iain Dale at 2:03 pm

Iain writes: "To eek out 300 pages on someone who has only recently turned forty is an achievement in itself."

Well, frankly, I was eeked out by that cover photo.

Iain, may we put in requests for “Brought to Book”? I’d very much like to see a programme with Francis Beckett on the sofa.

Laurence, Good idea. I know him as I published his book on Attlee. He has a new book on Gordon Brown coming outon 16 July, so that's probably the best time to get him on.

The only way we're gonna stop Cameron from becoming PM is by rallying behind someone other than Gordon Brown.

Daily Mail readers? I thought we were supposed to be Brown supporters now!

'If you think this is an achievement you should try the one on Wayne Rooney!'

"they have written a book aimed at a Daily Mail reader.." - talk about damning with faint praise...

Is it me, or is anyone else, from looking at that cover, thinking that Nicholas Lindhurst might take the leading role in any future biopic about 'Dave'?

"I didn't feel the final chapter left us much the wiser about what a Cameron government would do or how it would operate."

Are you trying to be funny?

Iain, Might you commission a rview by Jeff Randal? Now that would be worth reading...

Condi: "Oh, come onnnnn, Mr President, no way would Labor pick a guy for their next Prime Minister who eats his own snot. Brown's aide told me that the whole story was concocted by the opposition.

"delve into the character of David Cameron"

You're claiming that he has character now? This truly is the triumph of spin over substance.