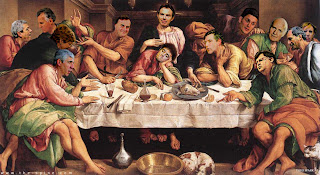 Ladies and Gentleman, it's ten years to the day since I first walked across
the threshhold of Number Ten Downing Street. In those ten years we have achieved
much, but there is still much to do for our New Labour government. You have
placed your trust in me in three general election victories. I now place my
trust in you. And I place my trust in my successor.

Ten years is a long time for any Prime Minister to hold office. I had always intended to announce my departure on this day. But I say to the British people - our project will continue. New Labour will renew itself. There can be no turning back if Labour is to achieve an historic fourth election victory.

You really can imagine this happening, can't you? A final flourish, a final dramatic gesture from the great showman. It would be typical of the man. And the bottom line is that it wouldn't do any harm to Labour's turnout and vote on May 3rd.
But I wonder what Gordon Brown would make of it? Well, we probably won't know, but I raise the whole scenario as a possibility - no more than that. Graphic hattip Theo Spark & The Spine.
Posted by Iain Dale at 12:25 am

My friend in No 10 says this (not in so many words) is *exactly* the plan. Indeed Blair's staff have been so busy on their New Labour Manifesto ("what we would have done if Blair had remained in office") that they've let Cameron off scott-free and spent hardly any time attacking him.

Idea apparently is to paint Gordon into a corner: force him either to disown NuLab policies (& miss out on triangulation opportunities) or else force him to accept that he owes it all to Tony.

I rather see a different scenario for May 1st, a worker's/socialist's holiday, TB will announce his resignation from ZaNuLabor on that day.
Holding onto the premiership to spite his next door neighbour!

I don't doubt he has the form for drama and political theatrics but I think his 'people' are smart enough to realise it won't work.

It would generate 3/5 days of nothing but 'Blair legacy' stories and policy discussion would be zilch - right through polling day. I agree it wouldn't 'harm' turn-out for Labour but neither would it improve it significantly.

Blair became prime minister on May 2nd 1997 though, Iain. It's when the Queen asked him.

Labour's opinion poll figures are better with Blair as PM rather than Brown.

If it were 2nd May wouldn't be surprised. But WHERE has this idea come from? I've had it for a couple of weeks from two people who I KNOW don't look at political blogs (what sane people!).

The Mole (from The First Post) has Blair in the garden on May 9th after the Scottish and local elections.....

if we are playing 'Blair's resignation announcement' how about:

Today I was received by Her Majesty the Queen and confirmed that I am resigning as Prime Minister.

This Labour adminstration has done much to lay the foundations for an equitable, just and economically successful Great Britain. As we have modernised our institutions, increased the well being of all members of our society, and extended choice into the social provision offered by the state, we have relied upon the remarkable economic stability delivered by the Chancellor of the Exchequer for a decade. Our generation of New Labour has given its all and achieved much, and much of the credit for everything that we have done belongs to Gordon Brown.

It is time to pass all this into other hands, to another generation who are our heirs yet better fitted to the challenges that now face any government in the new state in which we find ourselves. While every generation stands upon the shoulders of its predecessors, it would be hubris to say that they will stand upon the shoulders of giants. To say that they will stand on firmer ground and a safer foundation than that offered to me, indeed to us, when I entered Downing a decade ago is simply to state the truth.
I have recommended to Her Majesty that David Milliband should be invited to form an administration and present his government to the House for their vote of confidence; confidence that he enjoys throughout the Labour party and the country.
God bless you all.

Prescott: Ah've dun it! The pellet with the poison's in the vessel with the pestle; the chalice from the palace has the brew that's true!

Blair: Stupid fool! Mili broke the chalice from the palace and replaced it with a flagon.

Prescott: A Flagon wi a dragon...?(Gulp)

Blair: The pellet with the poison's in the flagon with the dragon. The vessel with the pestle has the brew that's true!

Prescott: Oh, 'eck, I gave Gordon the wine from the vessel wi' the pestle

Blair: Who did you give wine from the flagon with the dragon to, John?

With all due respect to you and Theo, Iain, your hat tip for the image should be to The Spine website.
The Spine Link

I'm sure Theo provided the correct hat-tip when he first used that graphic on his blog.

I think it only fair that the image creator should get the hat-tip and some well deserved traffic for his site.

David at The Spine has also the stand-out entry in the shortlist of the Channel 4 Viral Image Awards for his Brown/Lenin image.

People should vote for him here :
Worth a vote
in category B - Still Image Viral.

This is such a good idea Iain I'm surprised you suggested it.

Listening to huw Edwards announcing that tone had died of a heart attack would be more to my taste, although I would prefer him (Tone) to suffer more., maybe an accident that leaves him paralysed from the neck down , he is paralysed from the neck up so that would even things up.
I would also love to hear that Cameron had been run over by an electric car or decapitated by a windmill

Ladies and Gentleman, it's ten years to the day since I first waddled across the threshhold of Downing Street. In those ten years I have achieved nothing, and there are still more departments to mess up under our New Labour government. The Union vote has placed its trust in me in three general election victories. I now place my trust in you. And I place my trust in my successor.

Ten years is a long time for any Deputy Prime Minister to hold office.

About 10 years too long.

Beau. You are quite right to suggest that The Spine should share the credit for the image. The original idea was mine and I asked The Spine to create it for me. It has and always will be listed as a Theo Spark/The Spine co-production.

Anyone intending to wait outside Buck House with an coffin draped in Union and Iraqi flags for when Tony drives past on the way to his interview with the Queen? It would give the press the photo they need to memorialise him...

He should announce his departure a month in advance and spend that month on his knees, flogging himself while begging forgiveness 24 hours a day.