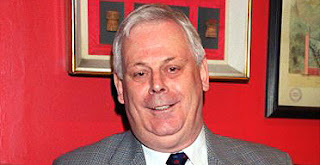 The death of Terry Major-Ball has been announced. He was a genuinely lovely guy who had a heart of gold. He came to many a booklaunch at Politico's and was always full of anecdotes. Terry could never quite believe that hsi brother had reached such giddy heights and was genuinely proud of him. The Guardian has a good obituary HERE as does Stephen Tall HERE.
Posted by Iain Dale at 11:27 pm

His book Major Major was something special.

What a shame, a really nice guy.

Seems as though the family were endowed with manners, common sense & integrity. All attributes,Sadly lacking in such a lot of public figures. You never know his brother John may well be the last "gentleman" Prime Minister we ever get>