Take Your Seat: Campaigning for Adults

Today may well prove to be quite an important one as the Conservative Party gears itself up to fight the next election. I've been attending a full day conference at Millbrook, near Milton Keynes, called 'Take Your Seat' which is mapping out the future of Conservative constituency campaigning.

Obviously I am not going to go into much detail here - in fact no detail at all - but I will say that for the first time I genuinely feel that those who.are devising the strategy actually understand what needs to be done and actually have the will, skills and money to do it. But it was made very clear that a bargain was being struck.

Those constituencies who support the strategy and buy into helping their candidates will be helped from the centre on a scale not seen before. Those who squabble or refuse to release resources to help their candidates won't be. Simple as that.

The great thing about today's event was the honesty of the speakers, who included David Cameron, Francis Maude, Don Porter, Stephen Gilbert, Gavin Barwell and Patrick McLoughlin. The whole event was chaired by Michael Ashcroft, the Deputy Chairman of the Party responsible for our target seats campaign. 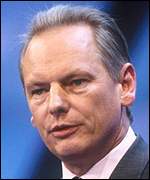 We weren't spun lines. We heard about negative polling as well as the positive. I well remember that just before the last election we were told by the then Chairman that all the polls showed huge swings in the marginal seats. Those of us who were candidates in those seats didn't believe a word of it. It undermined all the other important messages we were being told at the same time. That has all gone. We're being treated as adults now and everyone today felt all the better for it.
Posted by Iain Dale at 5:36 pm

"Obviously I am not going to go into much detail here - in fact no detail at all..."

Why not? We're all adults here.

Are the big boys picking on you already, Iain?

Blamerbell, yeah, like it would be a really good idea for me to spill the beans to our political opponents, wouldn't it?! :)

Don't think you're hiding too much here Iain. Cameron's strategy is to not go into detail about anything at all!

I was there also, there was an element of confidentiality about what was discussed so Iain is quite right not to discuss it in detail.

Im guessing this is connected to the By Election Task Force.

I dont agree that we are being treated like adults. Look at the A List and the membership fees survey where we were told the preferred answers. Policy isnt done in an adult manner with Associations shunted sideways from the policy process.

what happened to Iain 'I can still speak my mind despite being on the A-list' Dale?! :)

No beans for you, Blamerbell. I am perfectly able to speak my mind, but I'm hardly going to post stuff from this conference which would be useful to political opponents am I? Be sensible. Nor would I expect and Labour or LibDem blogger to do so.

any update on witham iain?

Anonymous, I was wondering when someone would mention that! You win the prize. The only update is that by responding to this post you have interrupted me finishing my speech...

I think it would be reasonable to say that the Conservatives are focused, frenetic and fired up to win whenever Mr.Browne calls the next election.That much we can say about the conference without telling our opponents anything of the process.

It was a very enlightening and informative day.The act is together - this time.

But not in Rotherham.

Anything about the numbers of campaigners on the streets? Anything to compete with the Yellow Peril hordes?

I have seen sheer weight of LibDem paper (i.e. posters, handbills...) capture a marginal. But only if there are armies of young - YOUNG - campaigners plastering the place with it.

This is really good news, I hope it means they will nee regional press officers again soon.

If we are going to win the next election we have to get over what we are going to do better than Labour. I have seen no sign of it yet. All this we are not going to say anything yet is wearing a bit thin.

I dunno about you lot, but I've found a candidate I think we all can support.

Now, can one of the Hebridean commenters do a translation for me? I admit to being stymied by this accent.

As another attendee at yesterday's event, I'd like to echo Iain's observations. The sense of purpose, determination and direction were palpable. Sense was talked, no punches were pulled.

It was made quite clear that the details were not for general consumption.

I was more fired up by yesterday than anything I heard at conference.

I was there too and Iain is right to not comment on content. It was superb and motivating though.
As an aside, Millbrook is a very cool place!

Some of us had heard it all before......... however if it works this time brill...... thought Millbrook was a wonderful venue!

You've somewhat disappointed me with this post. I understand why you feel the way that you do, and I'm glad for you that you take comfort in measures your party are instituting in order to be a stronger force at the next and future elections.

However, i feel this post in particular has detracted from the value of your blog. To me, it read like a press release from CCHQ. if I wanted that, I'd go to the Conservative's homepage. It would have been more incisive had you gone into detail, but for obvious reasons you dont.

Since you have been elected to the A-list i have noticed an increasing tendancy for you not to criticise your own party. This may make good sense for your own political career, but in terms of the readership you have cultivated, I'm not sure this will aid your blog's popularity. Rather, I fear that it will impede it.

I find other blogs currently add more value to the weight of political commentary these days, whereas in the past yours was one of the blogs I came to first. It is sad that it is now one of the last, and usually only to see what David Cameron wants me to think about the Tories on any particular day.

Whilst I don't (and indeed haven't) always agreed with your politics, I'm happy that you have helped raise the profile of political blogging. But now I can't help but feel that you're squandering an opportunity you yourself helped to create.

Otherwise, you're either living a lie, or just lying. And neither is particularly an admirable quality.

Alex, I'm disappointed by this. You will find plenty of examples where I have spoken out when I disagree with the Party - tax for example. I was genuinely enthused by this conference. Should I have lied and said I wasn't? Did you not read the bit at the end where I criticised the previous partyt chairman? Did I mince my words? No.

Strangely enough, as a Conservative I agree with most Conservative ideas - but there are some I don't and I have been very candid about this.

I am not a natural troublemaker. But i have things to say and that is why I have a blog.

I can;t think of a single occasion when I have pulled my punches since being on the A List. People keep accusing me of doing so, but are never quite able to quote any examples! Strange that.

If Thatcher could visit, accept medals from & support the Croatian Nazi Tudjman & Ashdown spend the Pro-KLA war in Albania using his military experience to teach the KLA how to commit genocide better, rather than in Parliament doing his job, then Griffin can spend his time digging up Hitler's ashes & still not suffer by comparison.

PS re the Galloway bit - I suspect that if somebody in the Lords said this they would indeed at least be asked not to repeat it.

Iain says in his paeon: "We're being treated as adults now."

Why does this come as a relief and a joy? Why weren't you treated as adults before, during the full year that Dave has been in charge?