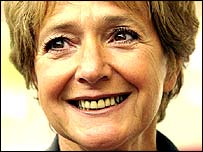 How on earth does this woman keep her job? Margaret Hodge was, until the last election the Minister for Children. This, despite her having run a Labour Council at the centre of child abuse allegations. Today she has laid into Tony Blair for Iraq, despite being a senior Minister of State in his government. She equated his foreign policy to "moral imperialism". We should remember this isn't the first time she has shot her mouth off and yet she still hasn't been sacked. This is not a sign of magnanimity on Tony Blair's part - it's a sign of his disappearing authority that Ministers seem now to believe that they can ignore the Ministerial Code almost at will.
Posted by Iain Dale at 11:09 pm

How do any of them keep their jobs?

Can you name a single minster of note who has proven effective in his or her post since 1997? I include Blair and Brown in that, and being effective does not mean effective in hiding incompetence.

And who exactly would he appoint in her place? Exactly.

Shotgun, After his first day overseeing the NHS legend has it Frank Dobson said to a Civil Servant, "Blimey, I didn't know it was this big."

From Day One they were out of their depth.

To be fair Iain, General Sir Richard Dannet ought to have been sacked as well.

Mind you I think Sir Ian Blair ought to be sacked for getting involved in politics (see my blog for full rant) as well.

However you are right it is fundamentally down to Balirs weakness.

Great post. Hodge is really incompetent and quite sinister that is if she wasn't so useless. She once spoke to a forum I was at, and was amazing she actually argued that democracy and choice between the parties was incompatible.

Benedict White - "To be fair Iain, General Sir Richard Dannet ought to have been sacked as well."

I believe he could only be sacked by our head of state?

What a shambles, looks like Blair has put his own foot in it with the David Frost interview.

I asked around at work and down the pub what if any good nulab have done and after much head scratching all we came up with was buying road tax online, that was it after 9 yrs.

Blair failure to silence his critiques may be a sign of weakness. But the real moral failure has been made by the Labour party who has allowed Blair to wage a war on a false pretext and then not resign.

Any Tory leader would have been toast under similar circumstances. And the independent membership would have finished him/her off - if the MP's didn't get him/her first.

But so many of NuLabour's placemen have been promoted so far over their pay grade in normal life that they are desperate to hold onto the privileges they gain in power for themselves.

Being in the Labour party now means that you have achieved Bernard's(yes minister) ideal state of becoming a 'moral vacuum'. They are moral cowards who have failed their party and worse the country.

Blair can't sack her really, not that she doesn't deserve it. She's absolutely ghastly.

No, if Blair starts sacking these loyalists it'll draw yet more attention to his weakness. And, given the rate at which all the rats are leaping overboard, he wouldn't have a Cabinet left by Christmas.

Thanks Margaret. Let the Conservatives sit down and relax whilst Labour implodes.

Margarent Hodge has always repulsed me even more than cringing buffoons like Dobson because of her quite unprincipled toadying up to the KGB while was accepting their bribes as a senior Communist lackey in CND.

Doesn't that look appalling in black and white? But is anyone going to prove it wrong?

Did you notice that although her remarks were taken down in shorthand by a journalist who checked his notes with two other people who were also present, Margaret Hodge denies saying what is attributed to her.

Presumably she also denies saying "I hope this isn't being reported."

The woman is simply dishonest.

Disapearing Authority - Disapearing Personnel more like it. The cabinet looks like a bunch of sixth form dregs. Still who want to get caught up with Tony and Gordon and go to prison.

If the people at Mitch's workplace are that thick I would have thought the minimum wage would have benefitted all of them.

Immoral imperialism actually. Just like wot Chamewon would have done too.

" she still hasn't been sacked."

Perhaps she has been 'sacked'? - might explain all sorts of leniency!

What she said is right though, it's nothing to be ashamed of, is it? However, she seems to have denied making this statement, seemingly concerned by the control-freakery of Downing Street: speak the truth according to Blair otherwise you're out. But as trumpeter says, witnesses say they heard here say this. So perhaps she is telling pork pies? Dishonesty? Nothing like a bit of that from a Minister.

Hodge, like some other members of the Government, keeps her job against logical expectations because she knows where bodies are buried. The webs of corruption that spread out from Labour town halls over several decades are extensive & intertwined.

Bob Piper said...
If the people at Mitch's workplace are that thick I would have thought the minimum wage would have benefitted all of them.

So that's two things then. Wonderful achievement for nine years of socialism.