A Quick Change of Underpants Reported at Number Ten 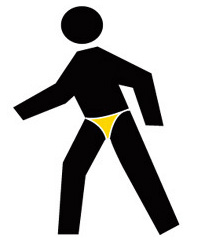 In a letter to the House of Commons Public Administration Select Committee Acting Assistant Commissioner John Yates says his investigation into cash-for-honours has turned up "significant and valuable material" and that "considerable progress continues to be made".

Mr Yates told MPs he hoped to be able to send a file of evidence to the CPS in January.

There were reports this afternoon of dry cleaners being called to Number Ten.

UPDATE: Guido has the full text of the letter.
Posted by Iain Dale at 5:14 pm

No laxatives required in the morning me thinks!

...they'll be off to Levy's gaff as well, and a few more besides.

Be interesting to speculate who outside this country was really keen to see Toni re-elected.
Purely suppositional, naturally. I mean, no politician would accept such monies, would he?

Mr Yates says that while sticking closely to his remit under the 1925 and 2000 acts on honours and privileges this does not preclude investigation into anything else that should be investigated that turns up during his enquiries. So he seems to be trying to bring things to a conclusion as fast as possible but wholly unwilling to ignore anything that attracts his concern; very correct, very reassuring.

Have just read the letter from Yates. As a retired Senior Police Officer I will take a little guess that the real meat in this enquiry is in False Accounting under the Theft Act 1968.

Far easier to prove than all the "cash for peerages " stuff.

Just a thought.Let us wait and see.

The progress so far is great. However, remember we are dealing with the great Bliar, who has a whole army of corrupters working for him.
The proof will be if a real case comes to court. They are already trying all the fixes they can to stop it happening, so it is a case of watch this space

The big upside is that if they really do fix it, they will get well and truly fucked by the electorate next time round

Totally agree with Ken. but then again loans from abroad which are really illegal gifts from abroad is another good'un.

False accounting appears to be the default position. Yates implies he has some hard evidence on sale of homours. My guess is that one of the lenders has 'come clean' and that one or more of the hard discs has yield incriminating exchanges of emails.

Accounts are done by accountants not by sane politicians or even Gordon Brown.

You dont get to be PM at all never mind stay in power for 10 years while taking the absolute piss out of the people that elected you, by being stupid.

To my knowledge a serving or ex British PM has never been arrested for anything serious. Our common sense should tell us that at least some should have been.

The question that matters is not whether Tony Blair has sold honors. Or even whether any minor civil servant or party hack gets arrested. The question is why the BBC and MSM has not investigated and reported this issue in any depth at all.

OUR public service broadcaster with its charter to protect the interests of the British people, has failed us yet again. This is far more serious then a magor party political funding skam and far more dangerous to our liberty.

"Democracy has no meaning or desirable purpose without a free independant press and media."

Is there any one out there that still thinks we have either in 2006 Britain?

You heard about the pirate captain who always called for his red shirt when going into battle? He said it was so the blood wouldn't show and the men wouldn't get discouraged when they saw he was wounded.

One day the watchman cried, "Enemy ship on the horizon!" And sure enough, the Captain called, "Bring me my red shirt!"

"No, wait," said the watch. "Five enemy ships on the horizon!"

And the Captain cried,"Bring me my brown pants!"

Let me gaze into my crystal ball... Mr Yates, show me your document... ah yes. It says "Mr Blair is not only innocent but verily a shining light of goodness unto the nations. Mr Brown is innocent and wonderful. Mr Cameron is innocent and nice. Mr Hague is innocent and clever. The Mr Campbells are innocent, bless them. Mr Howard is innocent albeit slippery. Thank goodness! Now then. Who can we find guilty? I know! Mr Levy. Plus a few minor squits."
(sound of Levy packing bags to leave via an airfield in Lincolnshire in an unmarked plane).

Having a son currently serving as a CID Inspector and knowing from my own earlier disillusionment with the senior admin-climbing "Bramshill" cult, I have great doubts that anything remotely satisfying will come out of this investigation. Unless Yates is truly suicidal, he wont be supporting Commissioner Blair's "bite-back" despite the half hearted promise that "Acting - Assistant" will be converted to Assistant, or anything else. The New Labour machine will be working in the background to make sure that if anything is found it will be a Conserevative or LibDem problem.

One has to understand why our police force is so bloody awful nowadays. First of all Labour and its army of lefties introduced the CYP Act of 1968 which permitted kids to do as they please and tie the hands of the police. Then they supported as many politically correct and stupid interferences in our lives. As if that were not enough they then further restricted the police from doing their job with the idiotic PACE rules which make it easier for real criminals to literally get away with murder. Add to that the "Officer" class of graduate entrants who couldn't catch a cold, then you have a disillusioned service where the administrators are watching each other and giving no support whatsoever to the people doing the real job of policing.

where have all the posts gone?

Have you had a fix applied by no10?

Given Blair's past conduct, the only fair way to interview him would be with a lie detector. Or perhaps thumb screws? Guantanamo is available of course for extreme cases, I feel sure an extraordinary rendition would be thought appropriate with such a difficult case.

Siraf said: "Accounts are done by accountants not by sane politicians or even Gordon Brown.

You dont get to be PM at all never mind stay in power for 10 years while taking the absolute piss out of the people that elected you, by being stupid."

All very true and normally I would agree. However:

1. Bliar does not have a shred of political capital remaining. He blew it all on Iraq, which itself featured cover-up and institutional connivance. No one will fall on their sword for him.

2. I suspect the Met are wary of the enormous damage to their reputation that would occur if the investigation was not pursued wherever it went. Having said that, this does not stop the CPS etc dropping the case (but I bet that particular ship of state is riven with leaks).

3. This appears to have been a closely-knit conspiracy limited to the key players and directed from the top. There are relatively few sticky fingerprints and most of these are one degree of seperation from a certain T Bliar.

When charges are made, if Bliar is not amongst their number then he will be close enough to take enough fan-splattered shit to forever besmirch his reputation. Those book sales and lecture tours will be far less lucrative than hoped for!

Yeah yeah. So another PM is shown to be completely corrupt. Can we get on with the real news of the day, that Segelene Roayal is HOT HOT HOT.

I feel my Francophile creds coming out for a dusting down. Where's my change of pants?

That does not get you out of a charge of false accounting. Ask the (non-accountant) directors of Enron, for example.

If you sign off accounts (as company directors and prime ministers do regularly) and the accounts are false, you are liable to having your collar felt.

(Do you think there is a special prime ministerial suite being got ready at Wormwood Scrubs?)

At least, spell it correctly....Segolene Royal !

Why the fuss? I have already said to Tony that Yates will do nothing without my say so. We have done so much for the police and won't allow this Tory bastard to get in our way, with his "justice". Like I told Gordon yesterday, whenever me and Arthur were facing down Thatcher in the 1980's, you don't get anything for being within the law.

Good to see that finally the PR machine is working against Labour. Was getting pretty bored of their constant feeds along the line of the-investigation-isn't-working-no-progress-being-made-everyone-proclaiming-innonence crap.

Bring on the findings.

Fall guys lined up? Not that I think TB isn't capable of it, but are there any fall guys willing to go to prison for him? Unless False Accounting is the charge, I can't see how a "fall guy" can be fixed.

Whatever Lord Levy may or may not have suggested to anyone (and I know nothing about it or him) he couldn't give anyone an honour. So there we are, back to TB again.

Boring. All the parties have been selling honours since the year dot, the difference being the Tories appear to have been better at keeping a lid on it.