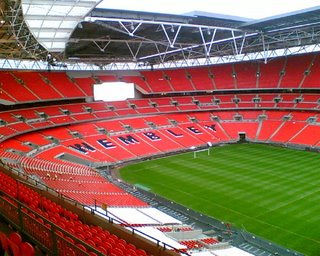 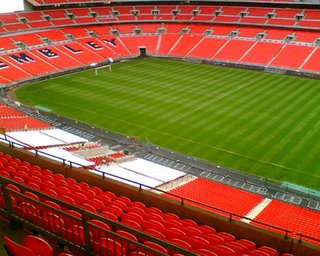 If only West Ham could grace the turf.

Hmm, it's got grass and some seats. Big deal. Still, after all the delays, budget cock-ups and wranging, it's nice to know it's almost ready. It's hardly promising for the 2013 Olympics is it...

Is that the Ken Bates Stand I see before me?

Was raggasonic being ironic when he wrote '2013 Olympics'?

The seats are the wrong colour. They need to pull it down and start again.

Geoffrey, if only West Ham could be graceful on any piece of turf...

Hmmm...I'm not sure what this proves. Part of the reason for the delays was a major problem with the sewerage infrastructure.

It is rather like buying a car at auction 'as seen'. The paintwork may be gleaming, but it doesn't really tell you what's under the bonnet.

Apologies for my sarcasm, but I think we should fill it with people who have had a few beers and a vindaloo, get them to use the loo so I can get my reference to seeing whether the 'shit would hit the fan' in. Ooohh, sorry..

Is this the hardest ever "spot the ball" competition? Or just a gathering of the Tony Blair supporters' club?

I am of the opinion that the old wembley was unique this new stadium is just another stadium okay England will play there but it is just a big modern ordinary ground with a metal structure thingy outside? Just looksl ike Emirates or Old Trafford, so what!

never mind ironic, how about optimistic

It would have topped the fiasco off nicely if they'd written Wembaley on the seats.

still can't get over the fact that the millenium stadium cost a fraction of wembley.givent eh money the FA have they should have paid for it themselves

Only 3 years to go before it's ready!

I am just looking forward to all those bands and singers performing there again. If Queen and Paul Rodgers do another tour, or Paul McCartney or U2 for that matter, then I will try and fulfill a lifetime ambition and buy a ticket!

Hmmm.... if it wasn't for the seats spelling "Wembley" it could almost be the Arsenal training ground.....

so how much did banked seating and grass cost?

I would have said optimistic, everyone knows its 2014 olympics...

That's £6 million per seat then. More expensive than a Space Shuttle toilet.

It could double up as an English Parliament on weekdays.

'Well Fiona er...this is the New Wembley Stadium and its called that because you know...ha ha...because my sources tell me there was another stadium on the site also called Wembley Stadium but it was knocked down because um...I believe it was too old.

Perfect place to reintroduce public flogging - especially for politicians that deceive their electorates. Blair and Brown step this way.....

Are we watching the paint dry ?

It is absolutely obvious that those "learned" people who made the decision to site the replacement stadium in Wembley and not somewhere down the M4 or near the NEC have never travelled there by public transport..If they had i'm sure they would have decided it should go elsewhere!!

Nick, been playing golf and then sitting on the M25 for 2 hours!

Anyone who's been to that stadium down the M4 would tell you that that is possibly an even worse location for a stadium than Wembley.

I'm surprised a hammers fan is interested? Haven't you had your once in a generation cup final?

Isn't this a bit difficult for a caption contest ?

If you click on the picture you can see the grass and the seats in much greater detail.

Back in 1983, Douglas Adams and John Lloyd published a book entitled 'The meaning of Liff' (sic). It defined towns in the UK with inner meanings, with some accuracy too!

'Wembley' was described as 'The hideous moment of confirmation that the disaster presaged in the 'Ely' (which is described as the tiniest inkling you get that something, somewhere, has gone terribly wrong), has actually struck'.

Where are the MPs then?

I have sat and watched since Friday, left Robinson Crusoe, what time is the kick off? And, are they going to kick the political football around?