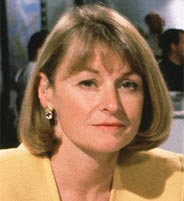 [curmudgeon rant] I used to rather enjoy Children in Need. The banter between Terry Wogan and the rather bashful Sue Cook (pic right) was always enjoyable. The entertainment was sometimes cringemaking but generally quite watchable. Nowadays Sue Cook has been replaced by Natasha Kaplinsky and the quite dreadful Fern Cotton (who 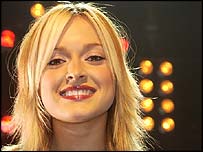 I always thought played rugby for England) ,whose exhuberance becomes rather wearing after about three minutes. The entertainment is a mixture of second rate soap stars (Bad Girls) attempting to sing, newsreaders making arses of themselves (too many to mention) and the odd has-been celebrity putting in an appearance to resurrect their flagging career (David Cassidy, Emma Bunton etc). Oh my God, the next act is the cast of Two Pints of Lager singing a tribute to WHAM and then we have CARRY ON HOLBY. And there's not even Cliff Richard to look forward to. I was in the middle of a four hour stint of watching LOST earlier on until my other half came home and made me switch over. The question is, how long can I stand it before I disappear into the other room? I'll just get my coat... [/curmudgeon rant]
Posted by Iain Dale at 11:36 pm

We did have the cast of Sound of Music earlier and a rather ok looking chap who sang - was he from a show on that dismal ITV network?

It's not just the libertarian thing though is it? It is the sharing of ideas.

It also to some extent is not just blog related as people having been banding together on the net for years it is the fact that so many more people are on the internet.

That means we can question, query and indeed fisk the rubbish these pratts come up with. As pointed out in other blogs, we are not media moguls for sale.

Persoanly I think it s good. Ideas that are good can stand scrutiny. Ones that are bad can't.

Children in Need was particularly bad this year. Perhaps we should scrap it and broadcast BBC Parliament live for several hours on BBC1. Viewers could pledge money to charity: "if we reach £30,000,000 we'll put Eastenders on instead."

I bet it would cost a lot less to run, too.

And anything to get Terry off TV is worth it.

Sue Cook? I thought the past few years was Gabby Roslin?

Don't you go all living in the past like these Labour tossers...

I think Children In Need was rather good fun. at the end of the day, these people give their time for free to help raise millions of pounds for charity. Not only that but so do many, many people who are not famous (like you). once you iain have matched that charitable greatness with a charity blog day, maybe you can slag them off. Maybe that would show what a nice compassionate conservative you are rather thn making money for youself out of Message Space.

David Cassidy was so Scary! I was always a Marc Bolan girl myself...

Showing your age I think Iain,

I had to stop watching it years ago.

I just cant understand how you can watch it year after year.

I agree about Sue Cook though.

No Iain, that was Dot Cotton. And she was still playing last weekend...

I avoided most of it, but had to turn it on to see if Amy Whinehouse was still pissed. I guess she was taking a day off.

I watched Simon Schama on Turner. It isn't compulsory, you know.

Yes, it has been Gabby Roslin for about the last ten years.

Fearne Cotton does grate on my nerves. I also wondered what on earth she was wearing. That hideous green evening gown was last seen in 1976 being worn by Margot Leadbetter in "The Good Life", when she was hosting a party the Surbiton Light Operatic Society.

Dress sense, as well as presenting, are not skills possessed by Ms Cotton.

I'm astonished that anyone watches CiN - I have deliberately shunned it for years, having seen from the odd five seconds caught while channel hopping that the whole thing is unremittingly awful.

Forget TV Iain. Talk to us instead.

I hereby declare you a 'Grumpy Old Man'!

I was dubious when the announcer at the beginning said it would be "a night of first class entertainment"... which lasted as long as the opening lyrics from McFly murdering a Beatles classic.

I accidentally dropped back in to see my old local station introducing men dressed as fruit handing over the essential oversized cheque.

Like Eurovision, only TW keeps it going. Maybe the BBC should take his - eventual - retirement as a hint that the Children in Need format needs a rest, too.

You should try watching in Scotland. You hardly see any of the national CIN until after 11 o'clock, just a bunch of Scottish nonentities and occasional switch to the network feed when one of the bigger productions is on in London (often missing the start of it) and then back to Glasgow before any interview or chat at the end of the item.

For example, The Speaking Clock competition was given a very brief mention of a name, presumably in the rest of the country you saw the person and heard the voice,

Wogan is hardly seen until after 11 o'clock. Some might prefer that until they see the local alternatives.

I suspect Fearne Cotton is used to appeal to the younger viewers, I think they have always had a couple of more experienced presenters along with someone more familiar to the younger part of the audience.

I can see that the rather mumsy Sue Cook might appeal to Iain as a presenter. He may perhaps be rather missing the point of Natasha and Fern?

CiN is pathetic. I can't imagine why anyone would want to watch it. We don't need Auntie Stalin and Terry Wogan to tell us to whom to give charity.

It's illegal not to fancy Natasha Kaplinsky.

I am amazed you have the time or inclination to watch any of it. Is this in penance for something?

I was once informed by an Australian freind that there is indeed a broadcaster which funds itself in this manner - an Aussie radio station.

Apparently they broadcast no adverts and recieve no licence fee. Instead, when the coffers run low, they run a pledgathon. As the dealine draws near and if insufficient funds have been gathered in they resort to playing the Birdy Song in an endless loop until the public get so desperate that they make up the shortfall.

Sounds like a fine libertarian way to run a radio station to me.

Is Fern Cotton that blonde bird who kept on dropping her "h's".

My mother thought she was quite common.

UK population = 60 million. so that equates to 30p per head. i guess most people were watching the other channels so.

according to last years accounts, expenditure on "management, administration and generating funds was £2.4 million". However, the money raised is "invested" , and that came to "£3.1 million", thus cancelling out the £2.4 mill.

still , £2.4 million is paying for something - and for some people to have a nice feather bedded lifestyle, on the back of a national collective guilt about needy children.

and remember - that £2.4 million comes from thousands of people donating a quid, a fiver, or a tenner, and who think they are donating directly to a children's charity.

which begs the question - why not cut out the middle man, and change the tax laws to make it easier to donate to charity directly, as it is the case in the USA, with their tax-deductable donations.

Have a read of this , to see just how wide-ranging tax exempt status is in the U.S.