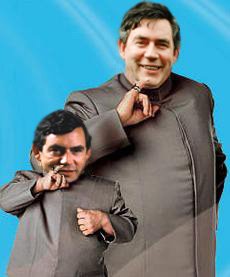 I was going to write a nice little post congratulating Gordon and Sarah Brown on the birth of their son, and leave it at that. But what does it tell us about Gordon Brown that's he named the poor little blighter Gordon? I am sure tomorrow's amateur psychoanalysists in tomorrow's newspapers will have a field day. I'm too polite, of course... Hattip for graphic to TheoSpark

UPDATE: Well, that was a wrong'un wasn't it? Just for the record I got the information from Sky News who were running it all day yesterday - not as a rumour but as fact that the newborn was going to be called Gordon. So instead of the blogosphere reporting unsubtantiated rumour as fact, this time it was the turn of the mainstream media, which I then chose to repeat having believed Sky. Hey ho. Apologies to Mr & Mrs B. I'm sure that little Jimmy is making them very happy.
Posted by Iain Dale at 12:17 pm

Ah but what's the little darling's middle name - I think we should be told.

Anonymous said...
Ah but what's the little darling's middle name - I think we should be told.

Yes, Rick...hopefully just about in time to welcome Tony and "Lord" Levy out of Wormwood Scrubs!

Gordon Sr first name isn't actually Gordon but James.
He's not the only MP to use his middle name instead of the first name

Anon at 12.42, I'll give you Lombard Street to a rotten orange that it won't be Anthony, or any diminutive thereof.

A double Gordon's and Toni(c)?

It tells you that you made it up. Where is the evidence that je's called his second son Gordon?

Anonymous, you may be familar with a news organisation called Sky News. It's been running on that all morning. Care to apologise for doubting me?!

Yes, I apologise without reservation for having claimed you made it up (blame Reuters and every other news outlet on the planet for saying no name has been fixed). Whether Sky are right - they don't actually make the claim themselves either, just say it is "reported", is another matter..

Given that big Gordon is such a fervent England football supporter, will little Gordon still be eligible for the Enland team on his mothers side?

Isn't than litle George Osborne on the left?

Perhaps you should have kept to your original idea.

Bearing in mind the circumstances of their first child death, these early days will be a worry for both parents.

In family matters perhaps "do as you would be done by" might be a useful guide.

Perhaps it is just a simple tradition of naming your youngest son after yourself.

Making alot of nothing me thinks.

Can someone who's Jewish confirm this --- I think Jews never name a baby after a living person. I think a Jewish friend told me that once.

One or two Tory leaders named their son after themselves.
Maurice Harold Macmillan for example, had a son called Maurice who ended up being Employment Secretary under Heath! Plus it could well be that Gordon Brown Jnr will be known by whatever middle name he might have!

I'm not, but I found this elaboration on the topic


"An old superstition maintains that naming a child after a living relative is bad luck: the angel of death, an easily confused spirit, might take the baby by mistake when coming for the older relative...Although most of us don't believe that superstition any more, many Jews still view it as strange and somewhat arrogant for a father to name a child after himself. In fact, it is so rare for Jews to name a child after a living relative that a colleague of mine once declared it "impossible" for there to be a Jewish "Jr." Nevertheless, this custom has broken down somewhat in recent years. My father is a Jewish "Jr." and would have made my brother a Jewish "III" if my mother hadn't objected. My childhood dentist was a Jewish "III" with a son who was a Jewish "IV"!"

For what it is worth, none of my many Jewish friends have names that were in common with those of their immediate living relatives.

I think Jews never name a baby after a living person

Isn't this making something of nothing?
My son has my middle name which was my father's elder brothers name (killed in the war) which was his father's, grandfather's and great grandfathers name.
Gordon sounds a good name for a young Scot, bless him.

Gordon's father and his elder brother are both named John, so it may be a family tradition. His grandfather's name was Ebeneezer, but John was his only son, there is no uncle Eb.

Gordon is a good name. Famous Gordon's include:

sheep_farmer said...
"Gordon is a good name. Famous Gordon's include:"

You appear to have overlooked the world renowned Gordon Bennett.

This has to be a wind-up surely!!

Any winding in of necks which were quick to condemn?

Who's going to apologise now?

so James Gordon Brown has named his son James Fraser Brown (assume rumour was he was going to name after himself, he has - but Sky didn't realise Gordon wasn't forst name) 50% right Iain.

In the words of that other James Brown: