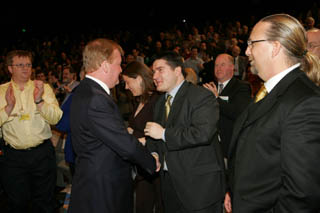 This EXCLUSIVE photo shows LibDem Donor Michael Brown with Charles Kennedy at the LibDems Party Conference. Brown is the one on the right with the ponytail. And they say money doesn't buy you access! Brown pleaded guilty to two charges of perjury this morning st Southwark Crown Court. I haven't yet found out what happened about the other 51 charges he was facing. He will be sentenced on 25 September, only three days after the end of the LibDem conference. He faced a jail sentence. The full story is on BBC Online HERE. Hopefully I will have more details later.

UPDATE: This is the FT report from the court.ib Dem donor faces possible jail sentence

Michael Brown, the Liberal Democrats' biggest political donor, was facing a possible jail sentence after pleading guilty on Thursday morning to perjury and passport-related charges at Southwark Crown Court. The Scottish financer, who was arrested in Spain three months ago, will be sentenced in late-September. But a judge indicated that the two counts on which Mr Brown pleaded guilty would normally result in imprisonment.

"On the face of it, a custodial sentence would be appropriate," Judge Geoffrey Rivlin commented. Mr Brown, who gave the Liberal Democrats £2.4m last year, had faced over 30 charges in a private criminal prosecution brought by HSBC bank. The international banking group had initially begun a civil action against the businessman and his company, 5th Avenue Partners, last year, alleging that fraud had occurred in respect of certain bank accounts held with HSBC. As part of those proceedings, the financier swore an affidavit, stating that some of money from those accounts had been used as collateral for trading with Refco, the brokerage company, and generated significant profits. But by December last year, the bank says that it had gathered evidence which it claims demonstrated that statements in the affidavit were false. In respect of the Refco trading, the bank says that it suspected that no such trading had ever taken place at all.

Accordingly, at the bank's request, the Crown Prosecution Service obtained a European Arrest Warrant for Mr Brown, and he was extradited from Spain earlier this year. On Thursday morning, the businessman, dressed in jeans, pleaded guilty to one charge of perjury in respect of that affidavit, admitting that he made a statement "that he knew to be false". The remaining 30 counts in the private criminal prosecution will lie on the court file. Separately, Mr Brown also pleaded guilty to one of two charges brought by the CPS in relations to passport offences. He admitted that he had "made an untrue statement" in order to get a new passport from the Passport Office, by claiming that the old one had been destroyed in a washing-machine.
Posted by Iain Dale at 12:33 pm

You do like whipping a dead horse don't you?

Of course, had this donor been giving to your party he'd be in the Lords.

Is Brown the chap nearest to us in the photo Iain? Correct me if I'm wrong, but it appears that Kennedy is actually ignoring him in the photo. I'm sure you're right though - access to Kennedy would have been so worth buying as well - that powerful man could have influenced the placement of Lib Dem council candidates! Or the planning applications in certain parts of the rural south-west!

The horse ain't dead yet Mym - we have "lots more" outstanding charges and the civil case by HSBC. In other words, loadsa damaging headlines during the coming months, and a mad scrabble by the Lib Dems to scratch together that £2.4 million loan repayment...

mym is right. This dead horse is being flogged silly.

I don't like this Brown stuff but, bluntly, what a load of old bo%%ocks. All of this was declared, and OK HE now seems fishy. That is not the same as saying that the Lib dems did anything fishy. No Lib Dem is going to swing for this (and they can afford to repay anyway). What happens when the police come sniffing around Yo Blair though? Then even closer to home and find that CCO have dropped a "bit of a clanger"? That it was not a fault of the donor, but the Party... then life for someone will become awfully exciting and then very dull for about five years.

So, Mr Brown for the Lib-Dema, Mr Levy for Nu-Lab (with a favourable wind)... who's going to be the Tories' sacrificial lamb?

Which person is meant to be Brown?

The one he's shaking hands with looks to me like James Gurling, his brother-in-law.

Is it the guy he's not shaking hands with, talking to or looking at?

Meanwhile, in a Guardian/ICM poll Lib-Dem support has fallen to 17%. I love the smell of political collapse in the morning...

Who would have thought Penn of Penn & Teller fame was a lib dem backer...

Flogging dead horse metaphors should be confined to dealing with glue factories.

"Brown is the one on the right with the ponytail" - I didn't spot that part of Iain's post.

Interesting reading the take on this picture. Shame it's too dark to make me out properly just over the steward's shoulder.

I notice that this story doesn't feature prominently on the BBC website - I suspect that if it had been a Tory then Al Beeb would be screaming from the rooftops.

He had a pony-tail! And still they didn't smell a rat?

Your correspondent is indeed correct in saying that it's James Gurling - his brother in law and key member of his election team - who he is greeting in the photo.

And there is indeed a person in the exclusive photo who has access and very definite personal influence on Charles Kennedy. But she's to the left of James and is his sister Sarah. Charles Kennedy will have recognised her, because she's his wife. He is a lucky man......

Correct me if I'm wrong, but isn't this a pic of Kennedy in the conference hall immediately after his speech with hundreds of other conference delegates?

Whatever did happen to the money Asil Nadir donated to the Tories, Iain?

This horse is still very far from dead.

The Electoral Commission have merely suspended their review of the donation - focussing on whether the donation was legal or not - pending the outcome of court action.

In any case, hadn't Mr Brown arranged for Chuckles to fly to the conference on his private plane?

As for the LDs being able to pay it back - I don't think they have a hope in hell of finding £2.5 million in their back pockets - unless some of their millionaire MPs decide to lend a hand. Featherstone, Hemming, Huhne - let's be 'avin yer!

inamacus no need to correct you there at all.

I think it is good practise, (especialy as the BBC does not bother anymore,) that blog sites make it one of their prime objectives to draw any potential malpractice from any politicians, to the publics attention. It seems that you anonymous do not agree with this statement WHY?

Even when a political party is not in government, it still has a large amount of real power over where public money is spent, favours and planning permision given. This does not just apply to Local government but national as well.

Remember it was possible last time and may be very possible next time that the lib/dems will hold the balance of power in Britain for the first time in 30 years. Even if they get less seats then ever before. The Lib/Dems therefore need as much watching as all the rest. I would sugest even more.