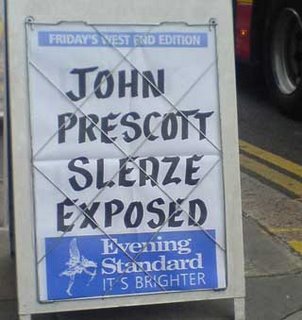 My earlier assertion that the media are giving Prescott an easy time over the Standards Commissioner's report looks a little wide of the mark if the London Evening Standard is anything to go by. I'm told they are making rather a lot of the Deputy Prime Minister's failure to co-operate with some of the Commissioner's questions. Perhaps I should have read the Appnedices to the Report, rather than the main report. When will I learn that it's usually in the small print?! Sadly I won't be able to do that until this evening. More later. In the meantime, check the report out for yourself HERE.
Posted by Iain Dale at 4:30 pm

There appears to be a huge disparity in the valuation of the gifts in the report(£600) and what was reported in the media (£11K???)
What I would like to know is why is his own office was left to do the valuation?????
Where are the original receipts for verification of the value of said goods, and were the goods valued at their original purchase price or what they could be sold second hand.

Ianin
the headline could have been worse..
"John Prescott spotty arse exposed"

all enough to put you off a fish,chip and champagne supper.

You have to laugh at the headline. Nothing has been exposed that anybody didn't know. What next? "Brown wants be PM revelation"? "Ming Campbell is useless shocker"? "A square has four side"? I am more interested in why there are double yellows in front of a newsagents. Total disgrace, we fought Hitler to prevent that sort of thing...

Having read the report, that Philip Mawer is a clever chap. He can actually translate the verbal nonsense coming out of Pressa's mouth and turn it into English!

The gist of it seems to be that as he registered it, its ok, even after being 11 months late, following Swire's intervention.
Reads like some serious parliamentary piss taking to me.

According the papers, the cowboy clobber is $11000 of value; according to Pressa only £600. Its somewhat unbelievable that a billionaire would spend only £600 on a key contact who at the very least may know someone who knows someone who can sign off on his multi million casino deal.
Who are they trying to kid?

THE SEVEN PRINCIPLES OF PUBLIC LIFE


The following are the general principles of conduct which underpin public life. They come directly from the First Report of the Committee on Standards in Public Life, May 1995

Holders of public office should take decisions solely in terms of the public interest. They should not do so in order to gain financial or other material benefits for themselves, their family, or their friends.


Holders of public office should not place themselves under any financial or other obligation to outside individuals or organisations that might seek to influence them in the performance of their official duties.

In carrying out public business, including making public appointments, awarding contracts, or recommending individuals for awards and benefits, holders of public office should make choices on merit.


Holders of public office are accountable for their decisions and actions to the public and must submit themselves to whatever scrutiny is appropriate to their office.

Holders of public office should be as open as possible about all the decisions and actions that they take. They should give reasons for their decisions and restrict information only when the wider public interest clearly demands.

Holders of public office have a duty to declare any private interests relating to their public duties and to take steps to resolve any conflicts arising in a way that protects the public interest.

Holders of public office should promote and support these principles by leadership and example.

All this is printed in the documentation for nominating yourself for a peerage . You can download the forms and fill in your application. Very reasonable daily terms and good London base. Google it up all you British, Commonwealth and Irish citizens and get applying. You can see they're flexible about observance.

Maggie Thatcher fan: I know the cost of this type of Western wear (not cowboy wear; Western boots, Western belts and Stetsons are still worn in the US Southwest, albeit it with business suits) and a pair of Tony Lama boots will cost around $10,000; so will a hand-tooled Western belt. I don't know about Stetsons, but at a guess, the best would cost around $1,000. So we're talking $21,000 or £11,300.

Iain... where is this week's "Prescott to go before the weekend" story this week? Don't you realise that many of us only drop by here to enjoy these EXCLUSIVE revelations you give us.

Ever seen the episode of Yes Minister where Hacker, Humphrey and Bernhard go to the fictional Arab state of Kumran? A corrupt prince gives Hacker a gift, but the minister is unable to accept it because it is too valuable. So Bernhard gets the Prince to value it at 49.99. Thus Hacker is able to receive the gift. He gets rumbled by a Guardian reporter when he returns to England but of course gets away with it.

Zanu Labour are so corrupt they they probably wonder why anybody would laugh at such an episode. Still this is all creating the perception of sleaze that will ultimately destroy this Government. Even if it is Dave who inherits the crown.

l havent read it.....but judging from the caption it does sound like they are a bit late! Iain are they taking their cue from you?

I'm sure that Mr Prescott's inherent integrity will mean that he will find a way to produce receipts for his cowboy outfit and prove that it was only worth a few hundred quid. Tony meantime will actually play straight and answer a question at PMQ, Lord Levy will start doing honest deals, Gordon will stop massaging the figures etc etc.
Apologies for writing this whilst being pissed out of my skull.

Bob Piper said...
Iain... where is this week's "Prescott to go before the weekend" story this week? Don't you realise that many of us only drop by here to enjoy these EXCLUSIVE revelations you give us.

RE Mike Oakshott's post.
Yes I have seen every Yes Minister episode and Yes Prime Minister too, and I know the episode well. As I had written quite a bit in my post I omitted it, but it did spring to mind IMMEDIATELY. Well spotted!

If they exist at all the reciepts will be in America. The £600 is an absurdly low estimate made by the ODPM. Like comparing a carrier bag with a prada bag.

In his correspondence Prezza reckons £600 is 3% of the press estimate. That comes to £20,000 which I never saw myself.

I can see no problem. Lots of items cost a great deal of money but are low in intrinsic value. Football players spring to mind, or Princess Margaret's assorted knick-knacks.

Frankly I'm surprised Prescott got the bidding up as high as £600 on eBay...

One question - as these were worth over £140 what did HM Customs & Excise value them at for purposes of duty & VAT? Surely the tax due has been paid?

Why did his office have such trouble finding out the value?

They'd have filled it in when they posted it back (and presumably the department would have paid the customs charges):

HM Revenue & Customs website:
"Under international postal agreements, the sender must make a Customs declaration on a form, which, in most cases, will be attached to the package. The declaration includes a description of the goods, their value and whether they are gifts or commercial items.

The Post Office may charge you for clearing your package through Customs. They handle packages for Customs examination and, if required, open and re-pack them. The Post Office will also store packages if Customs need to make enquiries; for example, when the contents have not been declared properly by the sender. The Post Office fees are collected at the same time as Customs charges but are completely separate and Customs cannot reply to queries about them.

Usually the Post Office will collect charges on delivery. A charge label will be affixed to the package at the Customs Postal Depot. This will show the amount of Customs charges to pay as well as any Royal Mail fee applicable."

Iain, are you now doubling up as maggie thatcher fan? Or have you taken on a secretary to handle your replies for you?

Bob, sadly the position has not been filled. Would you like to apply?

"sadly the position has not been filled."

Bob Piper said...
Iain, are you now doubling up as Maggie thatcher fan? Or have you taken on a secretary to handle your replies for you?

Bob, I am afraid to say , in this instance, your judgement has proved lacking.
I am touched that you consider my post worthy of the literary skills of Iain Dale, but they are not in any way equivalent, and I was just asking the obvious questions which the Committee appears to have ignored, or taken for granted. Which ever way you call it, it is a perfectly legitimate question to ask.
Obviously the subject of New Labour sleaze is making New Labour and Old Labour extremely touchy.

fedex sent me a bill for £30 recently, for a t shirt, a wobbly desktop hula girl and some other stuff from a US friend as a gift.
As fatboy has a history of tax evasion (until caught) did he pay the VAT?