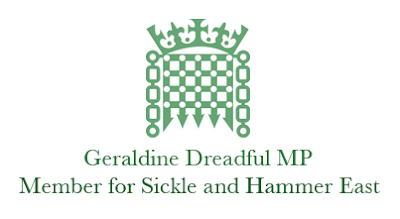 First of all, allow me to say how delighted we are at Sickle and Hammer East CLP to be hosting your keynote address "Labour: Adjusting change to metamorphose a modification in future transformations" next month. To say we're excited is as much an understatement as to say your interviews on the Politics Show make my seat slightly moist. It'll be like Songs of Praise - we expect to fill the hall at last!

It's an absolute delight to see a genuine hero of the previous administration coming to speak at our humble but active CLP; your astounding achievements as Foreign Secretary, and the sterling work you did for the Fair Trade Banana industry are legion, and it is only a budgetary constraint imposed by the new junta which prevents us from erecting a statue of you in Sickle's beautiful Lenin Square, opposite the Greggs and across from the Working Men's Knitting For Peace Federation.

As you know, you'll be following 'Mad' Eric Winterdale, who will be calling for a national general strike on the Tories' university places outrage, and you'll be given a rousing vote of thanks by Clare Strickland, who would have been launching the Labour Party Manifesto instead of Ellie Gellard, but who was pulled at the last minute when it became clear she was planning to assassinate Michael Gove.

The main reason I have for writing to you, however, is that I have noticed an opportunity for us to pull a flanking manoeuvre on the Tories, which could bear fruit very soon after you take up the leadership of the party.

The hated proto-Hagueite crypto-Thatcherist lickspittle and wearer of gaudy bourgeois silk ties (symbol of oppression of the silkworm) Iain Dale is seeking an executive assistant. This presents an opportunity to infiltrate his disgusting decadent operation and drain his all-too-potent power.

Imagine the things a well-directed infiltrator could achieve in Iain Dale's office. He or she could replace his ties with less mesmerizing ones, slightly rearrange meetings and cancel interviews he might conduct for Total Politics magazine. S/He could send bogus emails about his private life, destroying his reputation with the ladies. And finally, his affair with the hated Ann Widdecombe could finally be revealed to the world. The possibilities are endless.

David, please let me know if you think it's a good idea, and be assured that if you were to consider me for the Shadow Cabinet, great ideas like this will continue to be created.

With comradely but dastardly greetings, awaiting your visit,


* With due thanks to Ben Archibald of Nabidana.com
Posted by Iain Dale at 9:00 am

Poor little David Mini-Brand. Still, never mind, he'll be back to school in a few weeks.

Love it Iain! By the way, I think your choice of ties is admirable.