This evening, up and down Britain, thousands of people will have their enjoyment of watching Manchester United and Arsenal in the Champions League disturbed by their phones ringing. They will pick up the receiver and hear the magic words...

Hi, I'm Nick Clegg. Well, it's not really me, I am an automated message...

And according to this morning's Mail...

Stephen Williams MP, who represents Bristol West, complained to the Information Commissioner's Office after accusing then MP Valerie Davey of making automated calls to hundreds of households 'against their will'. He urged his rival to 'respected the rights of voters' and quit cold-calling.

Incredibly the LibDems also set up a website explaining how to register a complaint about this type of phone call at www.stopnuisancecalls.com. People can complain, and find out how to take their complaints further, through this site. It explains: "Commercial nuisance calls can also be an invasion of privacy if they are initiated for commercial or political benefit." Indeed so. They highlight people who are on TPS and are supposed to be excluded from phone lists. But I would bet quite a lot of money that the LibDem phone calls this evening will reach thousands of people who simply do not want them.

Perhaps the LibDems would like to explain what measures they have taken to ensure that anyone registered with TPS does not get any of their phone calls.

Personally, I have no problem with political parties making these kind of calls if they think it will do them any good. Whether they do, or not, is a moot point. If my memory serves me correctly, CCHQ used these phone calls all over the country on election day in 2005. I remember some discussions as to whether we should have them in North Norfolk and I think I agreed. So thousands of people received calls from Michael Howard reminding them to go out and vote... Ah, it's all becoming clearer now!

UPDATE: The SNP has issued a formal complaint to the Informatoon Commissioner. Click on the leter image to read it. 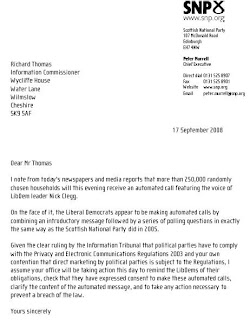 "Hi baby, I'm Casanova Clegg, like to fly me a mile high? Eh? Your Majesty, I do apologise most sincerely. Computer must have picked the wrong number, what?

Still, now we're here, can I tell you about our brilliant new tax and spend polici..CLICK"

I'm not unduly worried about this.
Clegg, after all, has a history of coming up with the wrong number.

It is against The Privacy and Electronic Communications Regulations 2003 to make these calls without prior consent.

Calling anyone on the TPS list leaves them liable to a £5,000 fine for each instance.

19. - (1) A person shall neither transmit, nor instigate the transmission of, communications comprising recorded matter for direct marketing purposes by means of an automated calling system except in the circumstances referred to in paragraph (2).

(2) Those circumstances are where the called line is that of a subscriber who has previously notified the caller that for the time being he consents to such communications being sent by, or at the instigation of, the caller on that line.

Personally, I would be so damned angry to get an unsolicited and automated (lazy) call that I would hang up and refuse to vote for the party who did it. In addition I would get on to the party and play hell with them as far up the chain i could get.

Nick Clegg - stop being a wally.

"Thank you for calling Dave H. Please choose from one of the following options:

For a sanctimonous preachy liberal git utterly irrelevent to British politics who pathetically tries to engage with voters via a pre-recorded unwanted telephone message, enter your own number.

For a thoroughly irritated Dave H telling you to f*** off and die, enter this number again.

For all other enquiries, piss off.

Your call is not important to me."

The website you linked to is not the site I remember the Liberal Democrats running. Look at the domain name registration - the name has been taken over by someone else. It means you are quoting from another organisation rather than a Liberal Democrat website.

From my campaign days with the Lib Dems, I recall that under law, TPS doesn't include political parties making canvass calls because they're not actually selling anything. (Automated I'm not 100% sure on though)

However, I certainly wasn't a fan of doing so since people have TPS for a reason; to not be bothered by unsolicited calls whether they're selling or not.

I had to deal with a number of understandably irate people.

I think these phones calls are completly pointless! Whoever makes them! Just a pain!

Mind you Calamighty Clegg may put a smile on peoples faces as he is such a joke!

In the US the media talk about parties getting a conference bounce - The LD's may well get a negative one after Clegg's Gaffs.

"Personally, I have no problem with political parties making these kind of calls if they think it will do them any good."

As a voter I have a serious problem with politicians disturbing my peace and quiet with nuisance calls asking me to vote for them. Thankfully I don't live in a marginal.

The Lib Dems are also in the business of sending nuisance mail.

My son has just received a happy 18th birthday card from Clegg!. Wonder who's paying for that?

The Lib Dums are funny.

What are they for?

I wonder how many of the recipients will know who Nick Clegg is. Or care.

I started watching Nick Clegg give his leadership speech: I turned off when he mentioned Fannie......

Who would be Nick Clegg ? The start of his speech wasn't shown by the BBC - they had a more important chit-chat with Robert Peston instead...

He's doing a 'look-no-autocue' speech.. Wonder where he got that idea from ?

Providing you regularly clean your list to exclude TPS registrations there is no legal problem.

During the 2005 GE, Michael Howard called my Committee Room (in person)to say thanks etc - I was out knocking up - but my party worker manning the phones thought it was wind up. He took some convincing...

And he said 'twenty billion' even after the 'Paxo Pasting'..

What a dumb idea.

Having looked at the law I would say that the Lib Dems would be guilty of an offence no matter what their advisors may say. Marketing will include all forms of advertising and promotion whether or not to promote goods services or just ideas. Direct marketing which is used throughout the legislation is not defined but is generally taken to mean marketing to individuals according to information held in a database.

No doubt we will get the same protestations of "good faith" when plaod comes knocking.

Party election databases [the Lib Dem one is called EARS] include a flag for TPS, so identifying such electors is not a problem. Years ago, we Lib dems were indeed told by Cowley St to exclude the TPS-registered from our phone canvassing. We paid before each election to have a bureau run our database against a master TPS list and apply the flags.

Since then, the advice has changed, apparently because both the Labour and Tory parties are disregarding TPS. So we now disregard it. I assume that the results of the previous smaller trial in the West Country using Ashdown's voice were encouraging so Cowley St thinks it worth trying out nationwide. When I have tried it I have rarely got beyond an answerphone.

The problem with phone canvassing/market research is that it misses the large fraction [c. 50 % here in Twickenham] of new residents who either have no land line or opt to go ex-directory when they get a land line. The younger generation doesn't see the point of having a public telephone number.

The Information Commissioner could take ages, for nuisance mail and phone calls why not complain to the new Direct Marketing Commission? www.dmcommission.com

Clogg has excised the highlight of his speech. Comparing Andrex Dog led Tories to Smurfs and toilet paper. LOL suggest NOT hanging up if there is any chance that the Lib Dems are having to pay for the calls rather than exploiting some freebie. Just press a few random numbers and leave your phone off the hook. Apart from the cost this may tie up one of their lines.

So that's another quarter of a million households that Clegg will be antagonising.

Why go looking for trouble? Personally, I'll be making a complaint to the cops about nuisance calls.


This boy is really on the ball.

I'm a lib dem, and I'm pretty angry about this counterproductive waste of money.

Nuisence calls like this are why I'm ex-directory and TPS, if I was in a marginal (instead of the safe and pretty much ignored south/west) I'd be livid about the ammount of nuisence calls, letters and leaflets from all parties, and this just makes things worse.

Since then, the advice has changed, apparently because both the Labour and Tory parties are disregarding TPS. So we now disregard it.


Oh, and that makes it legal does it? That's one that'll go down a hoot in the courts. Please feel free to ring me and see what happens!!

Someone could have some fun making a few phone calls after 8 o'clock and saying that they are calling from the Liberal Party!

Here's what I wrote to Nick Clegg via his website.

I've voted Lib Dem in every election for the last 18 years.

Your automated nuisance phone call has just lost you my vote in all elections up to and including the next General Election.

I advise you to desist from using this excedingly irritating method of communication immediately. If you want my vote back then apologise publicly and start doing something about all the other nuisance phone calls that plague the country, and yes I'm on the telephone preference service, which you like so many others seem to ignore.

I can assure Rob's Uncle and Arkangel that we Conservatives do not ignore the TPS 'flag' in our database, unless something has changed since May of this year which was when we last had an election in my ward. Wait: no, we haven't changed.

Interesting to note that the LibDems are now ignoring it, though, and as usual for them, excusing themselves by means of a falsehood. Duly noted...

Heh, I just received one of these calls. I had no idea this was taking place, and my first impression was that it was some kind of elaborate ploy to get me to call a premium rate number (until a quick Google for "Hi I'm Nick Clegg" proved otherwise).

I hung up. I can't stand listening to automated messages at the best of times - least of all when I've only just got in from work and the bloody thing has called me.

I received an unsolicited junk call from the local Labour Party a few years ago.

I think I complained to the TPS and Labour Party, I seem to remember receiving a letter from the Labour Party which claimed that they were not subject to the ban on unsolicited junk calls because they were selling anything.

The TPS are a waste of time anyway as they are run by the junk call industry, The OIC and OFCOM are the only people able to take any serious action and both are as effective as the proverbial chocolate teapot.