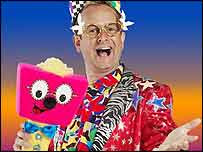 I thought the THIS WEEK sofa had plumbed the depths when Jade Goody's posterior was invited to grace it. I was wrong. I've just caught up with this week's show. I am still trying to recover from the fact that Timmy Mallett was a guest. Here's his opening piece of insightful analysis....

Andrew Neil: Are we good in this country, or bad at positive thinking.
Timmy Mallett: Wow, I've no idea. I don't really think about that particularly.
Andrew Neil: Are we a nation of pessimists?
Timmy Mallett: No, I'd like to say, er, we like to say the glass is half full except when we're at the bar I suppose, when we're at the bar and someone else as got the round in, in which case we say it's half empty and I'll have another pint please...

Do you think the THIS WEEK producers meet up each week and have a competition to think: who is the most ludicrous person we can invite on? Whoever had the bright idea of Timmy Mallett must have won by a landslide! Coming next week: Tyrone from Coronation Street.

Point of info: I wrote this before I discovered on Wikipedia that in 2002, Timmy Mallett forced West Ham United Football Club to stop selling copies of their mascot, Herbie the Hammer, in their club shop after he complained that it looked too similar to Pinky Punky. How very dare he.
Posted by Iain Dale at 2:26 pm

Makes me glad I missed it. That said, it can't have been worse that when they had Julian Rhind--Tutt on talking about the EU.

I feel somewhat sorry for the producers who apparently have unworkable budget cuts forced upon them while being told by their bosses to push up ratings somehow. I imagine Timmy Mallet is the calibre of guest they can afford these days. (Mind you, chucking Portillo and Abbott off their perch in the same way they seem to throw all their toys out of the pram every week might just make things easier.)

"That said, it can't have been worse that when they had Julian Rhind--Tutt on talking about the EU."

It was, when Marcus,"I'm a twat",Brigstock was on.( Is twat allowed?)

In Timmy's defence, may I say that he has a degree in history, a successful career in radio and TV (his sense of humour doesn't particularly appeal to me but others obviously like it) and, according to Wikipedia, is a distinguished artist.

I thought the questions he was asked were rather facile.

JADE GOODY on This Week. Say it ain't so!!! Mind you, I'm surprised the Beeb doesn't get Jade Goody to interview Gordon Brown - give him an even easier time than Marr does. Is it me, or do the Beeb ignore opinion polls when they're so good for the Conservatives. I hope the Tories give 'em hell when they get into power - cos that's what they'll get from the Beeb!

Don't you think the unfunny but thinks he's a real comedian Lembit Opik would be even worse than TM?
He's cheesy and cheap and thinks he's hilarious. Everyone else thinks he's a prat. And talking of cheap, even a freaky Cheeky Girl would be funnier. At least you could laugh at the outfit!

Kramer, in this case I will make an exception!

Lembit is great. IPIK OPIK for Limp President. He is the only person who can get their party anywhere close to government.

(Okay, I think that's even less believable than the facebook group of people not wanting a Labour leadership election - the man is undoubtably a moron, but at least he's taken about as seriously as the limps deserve to be)

He's a million times more entertaining than 'Abbott and Portillo' and would outclass Dave as the head of the Tories.

And where's the class in someone who has a penchant for being pissed and shagged a Cheeky Girl?!
He's just an embarrassment. A third rate joker who will forfeit his seat to the cause of friviolity.