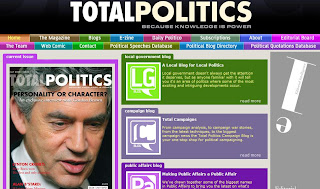 Just to let you know that the new Total Politics website has just gone live. It's not quite the complete article yet, but we hope you'll find it a useful addition to the world of political websites. It will have most of the content of each issue of the magazine online, in both article format and also as part of an online E-Zine (not yet live). In addition, there are three political resources which will grow in size fairly rapidly...

We hope you'll also like the Daily Politico feature, in which we ask someone from the political world fifty serious and not so serious questions. Mark Oaten is the first victim. We intend this be RSS'd and available as a daily email shortly.

Please let me have your feedback on the site in general, and also feel free to point out any errors or suggestions for improvement.

And most important of all, you can subscribe online HERE. An annual 12 issue subscription costs £35, 27% off the newstand price of £3.99. The launch issue will be in WH Smith branches in stations and airports, Borders and Waterstone's as well as loads of independent newsagents next week.

And before anyone says anything, this blog is not about to become a PR arm of Total Politics. They are two very separate things. I will only mention something on here related to TP if I think it is truly something most of my readers will be interested in.

Anyway, as you can imagine, the last week has been fairly intense as the first issue was printed. We're delighted with it and hope you will all like it when you see it. It's meant that blogging was a bit intermittent last week. Normal service will now be resumed, I hope!

UPDATE Sunday: The Observer has a feature on Total Politics today.
Posted by Iain Dale at 7:42 pm

.. and we all thought you were on honeymoon ...

"I find them all a bit nerdy, with sad people posting at 2 in the morning" - Mark Oaten on blogs.

There are worse things they could be getting up to, aren't there, Mark?

You ask Oaten "the thing I hate about politics" twice - and he gives different answers - was one meant to be "love"?

Most people can't keep up with the free online stuff. Why should they suddenly pay for the same items rehashed on sheets of paper?

Iain, the colours that are being used are really awful!

Some great content - wish you luck with it. Problem is that I have a 1024x768 monitor (like a lot of people) and keep my favourites open on the left (like a lot people), so I only get to see half the site and have to scroll across as the site doesn't resize with the screen size. Also some of the text is difficult to read on some of the deeper coloured backgrounds. Obviously a crafty way to get people to subscribe (which I will be doing by the way)

Congratulations, the site looks good, I'm sure the magazine will great too.

Taking up getting ob for a third of my screen space with a logo is not the best of starts....

Great web site. I especially like the database of speeches: how useful that will be when I need to while away an hour or two.

In terms of design, the articles are hard to read - the small black text on colours like purple is very offputting.

i'm a little reserved about subscribing because i did subscribe to a newspaper that was not on line only to find out a few months into my sixty five quid yearly subscription that they were going on line. Next thing you know everyone else can read it for free albeit a little later than me, but...

I got the first issue of Total Politics through the post this morning, and although I haven't had a chance to start reading it yet, my first impressions are that it looks very nicely designed and its good that it actually looks different to the other political magazines that are available.

"David is the Conservative Member of Parliament for Haltemprice and Howden."

Looks nice, but the title/logo banner is way too big. Anything "above the fold" is like your prime real estate and you're using almost half the page just to say "total politics". And there's no transparency behind the rounded corners on the title.

You misses LabourOutlook.com off the the blog directory

So far so busy, and the colours are a bit garish too. Is it meant to be an online collection of Conservative Thought? I hope the actual magazine is better than the online projection.

I'm definitely uncertain about this section though:

Speech on the General Strike
Sir John Simon, 6 May 1926

Apart from the above, I think you should be ok.

Best of the luck with the new venture.

Please don't take this as criticism - because it isn't meant to be BUT, why are you launching a paper magazine when all the old MSM is now going online? Does it make commercial sense to launch a magazine?

Thanks for my free copy. Did you send a copy to all councillors?

Constructive criticism? I like the front page but every other page has too small text and it looks cluttered. I found it so hard to read that I gave up. The blog directory seems to be randomly sorted and there's no search facility.

First impressions are that it is very good indeed.

I have bookmarked it - I have four or five political bookmarks, so you are privileged.

Mark Oaten made compelling reading. He doesn't like us types because we are sad, apparently. Oh, farck, perhaps I should get a few rent boys round and liven up my sad little life.

Well done Iain, it is streets ahead of the 18DS web effort whose name I cannot even remember right now.

I see Denis MacShane is as usual using the platform as another opportunity to smear the Tories and Cameron. Not a very thoughtful article - hope you didn't actually pay him for it.
I haven't read any other article - this thru ConHome, but if this is typical it's a piss poor mag.

Best of luck with the new magazine and website Iain.

(1) A "report a dead link" for blogs that have ceased to exist (3 of the "Attack Blogs" that I looked at are dead.)

(2) It would be nice to see more photos of politicians on the blog for those of us who like to, erm, gently enhance their images with Photoshop on our own blogs....

Hmm. A bit scary reading at first. So used to mags/sites with agenda that the broad church of TP is unnerving. Subscribed. Wish you all the best.

Interesting. I will look out for the paper version in W H Smith's.

Few bugs to iron out.

First, on the contacts pages the putrid green background makes the grey text impossible to read. Not good as people may want to send you stories or better still buy advertising space. In fact the colour scheme makes other parts of the site difficult to read. For colour blind people etc its going to be a problem. Needs an alternative style sheet.

Second, the top quarter of the site is dead space. Not really a logo or anything. Just empty. Could be doing work for you. I'd chop it and move the lot up.

Third, the e-zine is a variation on the old chestnut under construction. How about a taster? You must have some dummy PDF's you could load there.

Forth, the databases are great. Small point. Should recent speeches be selected speeches?

Finally, if you switch off the style sheet its a bit of a disaster. What do I mean? Well the site looses its structure and the top menu is buggered. Bad news for those using a screen reader. And not good for search engines either. Bad design. Period. Spank the developer and tell him to whack in a no style section there to sort it.

Oh, one more thing. Get an RSS button in the menu. Nothing annoys me more than having to root around on a site for the bloody thing. Make it easy for us to come back.

@anon at 6.11: yes, I think it goes to all elected politicians (and perhaps even unelected peers too), I understand. Makes me want to find a council byelection to stand in!

Let me answer a few of the points you raise...

Various - size of the banner - an advert will be appearing above the logo on Monday, so that's why it is relatiovely big. But I will see if it could be made a bit smaller.

TBF KAtic 5.14 - we did look at doing it only onlien but the business model doesnt work. We couldnt guarantee to advertisers that it would reach all the people the printed version does. I understand the point though!

Perdix, no one will like every article. Perhaps you might read a few of the othes before rushing to judgement! Read my interview with Lynton Crosby - very revealing!

Lakelander - the Blog directory is very much work in progress. Its based on my 2007 directory so I am not surprised if there are a lot of broken links. The whole thing will be edited over the next couple of weeks. If you see blogs which aren;'t included, do let me know.

Rohan - some very good points which I have passed on to the designers.

Professor Richard Wyn Jones, Director of the Institute of Welsh Politics at the Department of International Politics, Aberystwyth University. has written a letter to David Cameron

It looks very good Iain, only one ommission. Where is the NZ tab in the blogs directory??
I shall email david farrar and get him to ask nicely.

You kindly left a comment on my post yesterday about the site. I am very impressed by the site generally, and my comments about the blog directory were on the basis that that section is very much a work in progress. I am pleased that you'll have a search engine on this. You mention above about letting you know if there are sites that are missing - it would be usfeul if there was a feature at the Total Politics blog directory pages to submit a site.

Scott, that facility in indeed going to be added. In the meantime, please do email me with any sites not featured.

Couldn't find Heresy Corner in the directory. Probably because it's less than a year old....

Agree with most of Rohan's comments.

Completely ignore anyone that mentions the "fold" as it's been proved in a major academic study to be utter nonsense. Do we not trust users to scroll, the same way we trust them to use the 'back' button?

A lot of the design is a missed opportunity, I struggled to find some of the core features of the site at a glance.

It's a start but could be well improved upon. Good luck with the mag though.

Like the look of it very much - most professional, Iain. Should be on people's rolls.

Ordinarily, having the Prime Minister interviewed in a magazine's launch issue would carry great kudos.

As you not worried about the Brown 'Jonah' effect on Total Politics?

I cant for the life of me think why anyone would want to read what Gordon Brown has to say.

Shame the website design is a bit 'MySpace' - looks like Total Politics is aimed at teenage girls, probably not your intended audience

I've noticed one misattributed quotation so far. The "below stairs" one was Jane Clark, not Alan Clark.