Book Review: A Question of Honour by Lord Levy 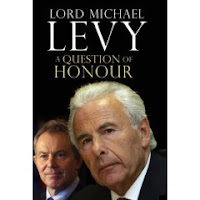 Reading Lord Levy’s book, I felt a slight sense of shame. Having written some fairly terrible things about him on my blog over the last two years, I expected my opinion of him to be confirmed a thousand times over by his memoirs.

Yet I have to admit, I finished the book wondering if I made a terrible error of judgement. Political autobiography is often said to be a work of fiction about oneself, and maybe this book is no different, and yet I felt a certain honesty pouring out of the pages. Have I been hoodwinked or was I wrong? If I have been hoodwinked, then it’s Levy’s ghostwriter, the brilliant Ned Temko, who has pulled off a coup.

Michael Levy is a self made businessman, from a very poor background. An East London boy who made it good. He makes no bones about enjoying the nicer things in life and admits he’s one of the vainest individuals on the planet. And it is this vanity, I suspect, which has got him into so much trouble in the political world. He liked being feted by high profile celebrities and politicians. It may be a weakness, but I can think of worse.

He became the very symbol of a changed Labour Party. He was shameless in exploiting rich donors and clearly got a kick out of it. He is the most successful political fundraiser since Alistair McAlpine in the 1980s for Margaret Thatcher. The Labour Party may feel bitter towards him for many reasons, but they have more reasons to thank him. Boy, how they could do with him now.

Much of the book revolves around Levy’s jewishness. I learnt more about what it’s like being a jew in Britain, and indeed about the Middle East than I have learnt from any other book. And for that reason alone I have no hesitation in recommending it. There, that’s a surprise, isn’t it? Buy it HERE.

A Question of Honour...

I haven't read the book, but I know exactly what you mean, Iain. When I first watched Levy interviewed on TV I was expecting to be repelled by him, but I found myself really warming to the guy. I have had the same reaction every time I have seen him interviewed since then.

But then again I guess that one has to be quite charming to get people to hand over seven-figure cheques!

Sorry mate, but if you've learnt more about the MidEast and Jews in Britain from Levy than any academic specialist on the subject then I don't think you reviewing skills are as good as your blogging ones.

Iain you softie.
Wait for Gordon Brown's 'waiting in the wings' autobiography.

A tale of a poor Scotch lad partly blinded at a young age. Only his fierce dtermination to be seen as an equal and not as cripple allowed him to overcome his disability.
He willingly gave up his place as leader that he won fairly to Tony Blair, for the good of the party.
Sadly betrayed by Blair he never complained but threw himself into his work and eventually had the title of prime Minister thrust unwanted upon him.
He only accepted as others said the party would implode without his leadership.
Unfortunately an economic downturn slightly blighted his record but he remains one of the greatest prime ministers of all time.

Next week.. Derek Conway 'For the People' one man's struggle to help others at his own expense.

I have always had a soft spot for Levy. There's a Jewish handsomeness about him that I like (I'm not Jewish) and I like it that he fought his way up from the streets and is now a lord.

I always got the feeling that he was enjoying himself immensely mixing around with powerful politicians and having a role. It was like a hobby. I wanted Blair's head on a plate and Brown's and Straw's and all the rest of them, but I always wanted Levy to get away with it.

So I'm glad his book's enjoyable. The others' books are duds, but his will make money.

He fell into bad company with that Blair guy.

The fact that the book is attributed to "Lord Michael Levy" (as if the author were the son or a duke or earl) does not inspire confidence. On the other hand, I saw his interview on the TV a month or so ago and thought he was very believable. I think he is probably a star-struck little boy who has fallen in with a gang of ruthless criminals. Maybe he should see if he can make himself useful to the Conservatives now.

Is there some way of turning off that BLOODY ANNOYING 'boom-tish' noise the Friction TV [and it does cause friction, I can tell you..] widget makes EVERY TIME it loads...

verity said.. 'I like it that he fought his way up from the streets and is now a lord.'...

Yes, but he bloody paid for it, you half-wit..it is not because he has some expertise or some special innate qualities to make him 'Noble Lord' material !!

Just listen to yourself - I have nowt against Lord Levy, but to equate his becoming a Lord with the achievements of people like Lord Norton, Baroness Murphy or Lord Ramsbotham, who got there on merit, is just a joke..

I don't know why someone with such poverty of what is presumably his (the level of anger at a woman you disapprove of can only be a male) langugage is reading and posting on a site where there is a fairly high literacy level.

As I was brought up to be kind to the less fortunate, I will simplify my post for you.

Some people are indeed entitled as a reward for merit. Some buy their titles in one way or another. It has ever been thus.

What I said in my post - and given the alternative of a small, envious provincial mind such as your own, I am liking Lord Levy more every minute - is, I find it appealing that he was born in circumstances of poverty but fought his way out of it energy, guile and ability to judge human nature. Thus, he became unthinkably rich enough to buy his way into the penultimate level of British society (the ultimate being HM) and, in one way or another, purchase a title.

I said I found this appealing. I also said he is handsome, although you may wish to dispute that, too.

I also understand, although I didn't say it, that he has been an outstanding Middle Eastern Envoy, so he has other merit in addition to having the ability to make himself a fortune and enjoy it.

Ah, I see you are getting it now, sweetie darling.

"Yes, but he bloody paid for it, you half-wit..it is not because he has some expertise"

You are the half-wit. He got the peerage for political services. He was a highly successful fund raiser for the Labour. Same as Jeffrey Archer was for the Conservatives.

"I don't know why someone with such poverty of what is presumably his (the level of anger at a woman you disapprove of can only be a male) langugage is reading and posting on a site where there is a fairly high literacy level."

A touch less arrogance would cast you in a better light Verity.

He has admitted in a Q&A at the Hay Festival that people who gave money to the labour Party did so in expectation of an honour. There was no price list as such, but it was something which was just understood. So he has now admitted what he refused to tell the police, that honours, including peerages, were given in exchange for donations to the Labour Party. And you expect us to admire this sleaze merchant? I don't think so. Nor do I expect the police investigation to be reopened, even though the prime suspect has now admitted publicly that the allegations of influence peddling and cash for honours were true.

Really interested in your views on the Caroline Spelman "nanny on the state" palaver?

dozzy: "The fact that the book is attributed to "Lord Michael Levy" (as if the author were the son or a duke or earl) does not inspire confidence."

No indeed. It should be "Michael, Lord Levy" or perhaps "Baron Levy". :)

You may wish to clarify what you understand to be 'merit'. I recall my grandfather at one Christmas Dinner recounting the tale of how he was given/obtained his peerage - apparently for service to the nation. That was quite an interesting insight for an eight year old boy.

Verity - what is your view of men who wear stacked heels or lifts in their shoes?

Joseph Cheaney - Why on earth would I have a view? We're all vain. At least he has a head of hair and doesn't comb four long strands of hair across a bald pate.

Chuck Unsworth addressing me: You may wish to clarify what you understand to be 'merit'. Not being a pedant, no, I wouldn't.

Dozzy - I think the view that Lord Levy "was probably a star struck little boy" is a bit Hollywoodesque for someone born into poverty in London's East End. I think he was probably a little boy who was determined to get the hell out. BTW. it was an ignorant employee of a reputable publisher who made this ridiculous error and the publisher should have shredded the mistake, but didn't. But I'm going to buy it anyway.

Vain? What on earth has he got to be wain about?

Oh dear Iain. Falling for the "I've had a hard life defence"!

Levy is a crook and only escaped jail due to New Labour tampering with the legal process. That he choses to hide his actions behind his jewishness is a disgrace. I don't imagine the community is flattered by this.

6:00 Is there really such a thing as a "community"? Or is this socialist-speak?

In my experience, British Jews are just as diverse in their opinions as indigenous Brits. They don't they think in a clump.